Two years ago, I spoke to Jew In The City about how exciting it was to be flying to New York to perform my own Off-Broadway show. Then in January of this year, I returned to the Big Apple to open my second show and wondered how this could be any more exciting than the last one. The first time is almost always the most memorable. I can vividly remember my first kiss (it was an Artscroll Siddur which I dropped on the floor, but it still counts). But you know what, this did feel even more exciting and in the next 643 words, please allow me to tell you why.

Well for a start, that last show – Strictly Unorthodox – was for an exclusively Jewish audience. And that’s fine, I love performing for Jews. Well most of the time. The most religious men don’t laugh. No enjoying themselves at all. Save it all up for the world to come. I was doing a show recently and my friend Eitan Freilich was in the audience. He sat next to a very frum man with a long beard and hat and he said this man didn’t laugh once the entire night. However, after every single joke, he turned to his wife and said ‘ah that was a good line; that was a very good line; I liked that line’. So at least he enjoyed it. Either that or he was doing a lot of cocaine.

This show is also a much more theatrical show than anything I’ve ever done before. It has a huge 10 x 10 screen, a director, a lighting designer and even a costume supervisor. I think she just checks that my yarmulke is clean and that the knots in my tzitzis are sufficiently tight. In fact, the whole team is listed with biographies in the show’s Playbill! Yes, the Playbill, that free programme with the yellow cover that anyone who has ever been to a Broadway show will have thumbed through while waiting for the performance to begin. To see people posting photos of my Playbills to Facebook and Instagram over the past month has caused me more excitement than a man my age should ever feel unless a cardiologist is in close attendance.

But the real reason this show is especially exciting to me is because bringing people together is at its heart. It tells the story of how my friendship with the Muslim comedian Imran Yusuf changed my life and made me look at my Judaism in a whole new light. And with Antisemitism on the rise, even here in New York, this is a very timely show, using humour to break down walls and demystify Judaism to the outside world. The show aims to make the audience laugh, but for them to also understand a little bit about why we do what we do.

Due to this show, there are now hundreds of non-Jews who know about shatnez. In fact there are hundreds of Jews that now know about shatnez since the laws concerning the forbidden mixture of wool and linen will be unknown to many outside of Orthodox circles. During the show, I explain how clothes end up getting inspected by a rabbi under a microscope in what is basically CSI: Flatbush. They also now know how Orthodox Jews are obsessed with finding loopholes. In fact, I’m convinced this may explain the origin of mother-in-law jokes. You get to make jokes about parents but they aren’t technically yours so you get around the fifth commandment. Admittedly it doesn’t always work. I once made a joke about having not been breast-fed by my mother-in-law and it sounded very inappropriate.

Comedy is an incredible art form. Not only does it have the power to make us laugh and think, it can unite people because when we laugh together, there is nothing else like it. And if the audience doesn’t laugh, well at least my costume supervisor will make sure they’re looking at a man with a spotless yarmulke on his head. 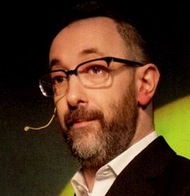 Ashley Blaker is an internationally acclaimed comedian seen and heard on TV and radio across the world. His second Off-Broadway show ‘Goy Friendly’ has been playing at New York’s prestigious SoHo Playhouse.

#MeetaJewintheCity on 770WABC The Bernie and Sid Show