Should God Get Credit When We Do Something Good?

I am hesitant to say anything in opposition to a beautiful, courageous act and cause any sort of divisiveness at a time when Jews must come together but I do have a theological question. When the man who stopped the Monsey attacker from doing more harm got a medal for his courage, he said he didn’t earn it, God did. While we believe that everything is in God’s hands, isn’t the one thing that is in our hands our free will? Is that a correct approach to give God credit when we do something good?

All the best,
Jason

The Talmud in Brachos (33b) tells us that everything is in God’s hands except for our decisions. The words used by the Gemara are “except for fear of Heaven,” which means our religious choices – i.e., whether or not we’ll observe God’s mitzvos – but the Rambam in Shemoneh Perkaim explains that it actually includes all of our lifestyle choices, such as what kind of person we’ll marry, what kind of career we’ll pursue, etc. So we decide what kind of lives we’re going to live but God decides such things as how much financial success we’ll enjoy, how many kids we might have, what kind of health we might have, and when/how we’ll die. God will determine whether or not we win the lottery; we can only decide whether or not to buy the ticket.

This is important to understand because without acknowledging that we have free will, people might be tempted to “blame” God for their own bad decisions. The classical example for this is the Pharaoh of the Exodus. God told Avraham that his descendants would be enslaved for hundreds of years; Pharaoh ostensibly fulfilled God’s will, so why should he be punished for that?

The reality is that God only said that the Jews would be enslaved; He never said that Pharaoh had to be the one to do it. Even if it had to be Pharaoh, he didn’t have to be so enthusiastic about it, oppressing the Jews the way he did, murdering infants and reneging multiple times on his promise to release the Jews. Pharaoh’s choices were his alone. (I don’t want to go off on a tangent about God “hardening” Pharaoh’s heart. If you’re curious, you can read about that here.)

Along similar lines, we have the mitzvah to erect a guard rail on a flat roof. The Torah tells us, “When you build a new house, you must install a parapet on your roof so that you not cause bloodshed in your house, that a faller should fall from it” (Deut. 22:8). The Sifre on this verse explains that the Torah calls the potential victim a “faller” because it’s someone who deserves this fate. His time is up but we must nevertheless install fences on our rooftops to prevent such things coming about through us. If we fail to install a guard rail and someone dies as a result of our negligence, we don’t get to say, “Clearly God wanted him to die.” God will decide when it’s someone’s time to go; our job is to do the right thing.

This works both ways. If we have to take responsibility for making bad choices, we shouldn’t shirk responsibility when we make good choices. We are obligated (when reasonably safe) to subdue attackers and to protect the innocent. This person saying “I didn’t do it, God did it” suggests that God manipulated him like a puppet, which is very much not the case. He made a choice and he acted upon it. This is an act of free will, the likes of which every person makes constantly, even if not typically under such dramatic circumstances. We should not diminish the accomplishment of making the tough choices and acting upon them.

But giving God credit? Absolutely. In The God Book, I cite the Chovos HaLevavos as follows:

[W]hen one needs something from a[nother] person… he should trust God for it and consider the other person as merely the means to acquiring it. This is comparable to the way that a field is the means to acquiring crops; if it is successful, one thanks God, not the field. If it is not successful, it isn’t the field’s fault. Similarly, when asking others to perform a task, one must understand that the weak and the strong are equally capable as, ultimately, it all depends on God. If the person is successful, one should thank God. He should also thank the person for acting as God’s agent in the matter, since the Talmud tells us that God only carries out good things through worthy agents (Baba Basra 119b).

So it’s really a partnership. It’s modest to the point of doing oneself a disservice to say, “I didn’t do it, God did it.” We’re ultimately responsible for all of our own choices, be they good or bad. But once we make our choices, we have no power to carry them out unless God wills it. For that we must always give Him credit and express our gratitude. 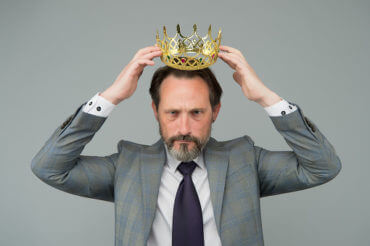