How Leading Yom Kippur Prayers Helped Me Get to the Olympics

As Israel’s Olympic skeleton athlete and current head of development for the Israeli bobsled and skeleton team, I often explain that Skeleton is perhaps the most dangerous of Olympic sports. If you have lived a life without any fear and want to go experience a taste, you need only go from the top of a skeleton track. We don’t wear any padding whatsoever—it isn’t aerodynamic.

For me though, the element that was most present in my journey was not fear—it was faith.

At the outset of my skeleton career, I was given the following scouting report. It said that I “lacked the skills necessary to be a competitive skeleton athlete.” The message was clear—this just isn’t for you. When I asked about representing Israel in an Olympics it was met with laughter. I resolved that I would not rest until it happened.

Making the Olympics is not so much a trial of athletic prowess (for indeed there are thousands of amazingly talented athletes who do not qualify, or even attempt to do so,) it is a trial of belief. In accomplishing anything in life, most especially a grand, impossible, Olympic sized goal, one cannot do so without belief: in one’s self, in one’s mission, and often belief in one’s divine blessing.

I cannot tell you how difficult the journey was, how often I teetered on the brink of absolute breakdown. Every single moment of the daily 18 hours that I was awake had a purpose and dedication to my goal of overcoming that scouting report. Without belief that Hashem was behind the journey, without the certainty that Israel had Hashem’s blessing, I would have quit after the first broken rib, which was, not coincidentally, in my first race.

I had a few rituals based around my belief that were of critical importance, but above all was to make sure G-d was on my side on the high holidays. The high holidays don’t just set the Jewish year up for success, but the winter sport season as well. In October, almost every athlete gets a sense of whether their season, their goals, sometimes even their Olympic dreams, are to continue, or be snuffed out. It is when national teams hold their selection races. Whether you can even participate on tour can be determined by thousandths of a second.

This is also a time that uncertainty is greatest. You know the work you put in, but you do not know the results. Worse, you don’t know how far others have come as well. Someone may have added far more speed, or dialed in their equipment, learned the track better. The previous years’ results cease to count for anything. The slate is completely blank.

Like many others, prayer can sometimes fail me. I’m uninspired and just repeating words. But that all changes on the holidays. As we read in the prayers, we are directly passing in front of Hashem for judgement. We are legitimately right in front of Him! It is impossible to not feel that at least once in this time period. I am completely naked before G-d, as He takes a look at how badly I have failed as a person and Jew over the past year. In the one moment we feel that connection, miracles are born.

I am a baal tefilla, a cantor in English terms, for the high holiday services.  I have been doing it since I was an undergraduate student. Ever since I began skeleton in 2014, I insisted on training wherever a community would need my help leading services. As my journey progressed, this became more and more important. Not only did I lack the skills necessary to truly achieve my goal, there was no reason why Hashem should give me a miracle. But I needed divine help.

Almost two years ago today, my Olympic season national team selection races were set to take place after Simchat Torah.  If there was ever a time that I needed to rest, focus, continue to train without fail, and keep fed and hydrated, it was these races. The smartest thing for an athlete during October 2017 would have been to stay at the bobsled track, planning, resting, training, and eating. No fasting, standing on their feet all day. But not for me. I knew that if I didn’t daven from the amud a full and complete davening on Rosh Hashana and Yom Kippur, I wouldn’t be in the true mindset to ask Hashem for help. With that help, I had a chance.

I found a Chabad in North Vancouver that allowed me the honor of leading the minyan on Yom Kippur. I have never said “please, Hashem” so many times in a span of 25 hours in my life. Neilah, the closing prayer and the climax of the day is usually the time we are weakest. But that is where I found my moment that day. The minyan was simply in a room at the front of a house, but it’s possible the entire neighborhood heard our prayers. As neilah concluded, I knew that Israel had a shot.

A few days later, I found myself in the basement of a home in Vancouver for Succot. The rest of the team and other athletes were 90 minutes north in Whistler, getting critical training time on the track. For the entirety of the day, my hands and feet had been swelling with dark spots that were painful. Walking was excruciating, I couldn’t pick up objects and my mouth had broken out with sores. I had contracted hand, foot, and mouth disease. There was no way I would be able to race in team trials effectively.

I saw the season, and the Olympics slipping away before my eyes. I was still affected during team selections. I couldn’t run on my feet at a decent pace—a death sentence for a skeleton athlete’s chances. But I had davened meaningfully on Yom Kippur, Hashem was on our side.

As race day came, my feet were still extremely painful to walk on. I barely warmed up and hadn’t eaten well. I missed training days due to the first and last days of the holiday. I was in a terrible situation. Nonetheless, as I headed out to the starting line, limping, I still knew—Hashem was on our side.

Somehow I sprinted the best I had, breaking my previous personal bests. Maybe it was the adrenaline, or maybe it was something divine, but it was not natural. I won the race, setting Israel up for a still improbable, but possible season.

I fully internalized a very valuable lesson that day that carried through to the Olympics.  No matter our deeds in the years’ past, no matter how unworthy we may think we are–Hashem is on our side, and gives us that clean slate if we ask for it. Tefila is not just a means to talk to God, it is a tool to inspire ourselves, to remind us, confidently, that we are backed by a divine protection. He is always behind us.

The morning of the Olympic competition, an episode threw the entirety of the future of the skeleton team into doubt. If I did as poorly in the competition as I’d done in training the day before, it would have been a fiasco, and an embarrassment for Israel. That morning, I prayed as though it was Yom Kippur. I needed that help from Hashem more than ever. When I arrived at the track, I took one look at the president of my federation, who was as anxious as I was and said “don’t worry, we’ve got this.” The race went better than I had hoped for.

These days are powerful. Our prayers are powerful. And we all have the opportunity to ask Hashem for great things in the coming year–impossible things. All we need is just one tiny spark, one moment, and we’ve got the year set up for success. Hashem is 100% on our side.

If you’d like to meet AJ Edelman, the first and only Orthodox Jewish man to compete in the Olympics, join us at the All Star Awards on December 2! 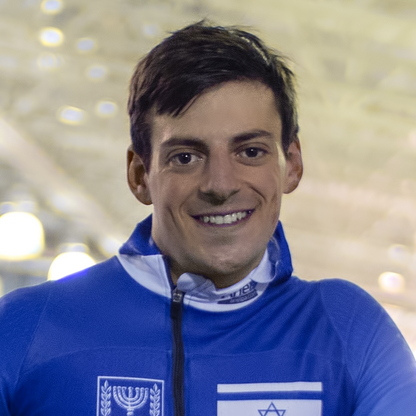 Adam (AJ) Edelman, OLY (born March 14, 1991) is an American-Israeli four-time Israeli National Champion in the skeleton event, and competed for Israel at the 2018 Winter Olympics in Pyeongchang, South Korea. AJ is the first Orthodox Jew to compete in the Winter Olympics, and the first Orthodox Jewish male to compete in either Olympic iteration. Retired from Skeleton, he is currently head of development of Team Israel.

Why Do We Read the Book of Koheles on Sukkos?