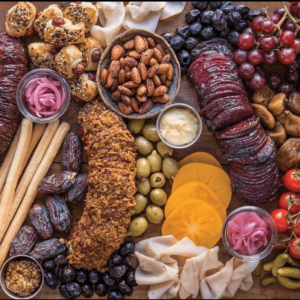 While people often assume that Hasidic women are relegated to the kitchen, many of them love to cook. Some even love to cook so much they make a career out of it. For Chanie Apfelbaum,  Instagram Influencer known as Busy in Brooklyn and cookbook author of “Millennial Kosher,” her entré into the food space had nothing to do with love of cooking. It came about in an unexpected way – through her passion for design.

Apfelbaum grew up in a Chabad Hasidic home in Crown Heights and was raised on typical Ashkenazi fare. As a kid she “never wanted to help [her] mother in the kitchen…and avoided it at all costs.” When she got married and had children, she began using cooking as a creative outlet. She was a web designer by trade and realized that she could use her keen eye to move away from the boring, brown, heimishe food she grew up with and add some color and style to her dishes. It began first with plating and serving food in unusual ways until she decided to up her cooking game too. “Food is so much more than just how it tastes; presentation is so important.”

Once she embarked on this journey, she started watching The Food Network as an educational means rather than for entertainment purposes. For inspiration, she bought food magazines and over time created a culinary community with her friends online. When starting out, she had no intention of establishing a name for herself in the kosher food space, but with hard work, talent, and the rise of social media happening at the right time, a hobby turned into a successful business.

Once she was posting her creations on Facebook, people were incredibly receptive to them. This led her to launch her own cooking blog that she first called “Cooking, Crafting and Coping” in January of 2011. “My passion is for modernizing traditional, Jewish food in a fun and exciting way.” As Apfelbaum’s career continued to advance, she enrolled and graduated from the Center for Kosher Culinary Art. This experience opened up her eyes to foods beyond her daled amos of Ashkenazi cooking. She walked in with a mindset that “I’m not going to say no to anything” and was ready to try new, exotic dishes. She believes that cooking is all about experimenting and venturing outside of one’s comfort zone.

As Apfelbaum continued her blogging, the following grew bigger and bigger, leading her to making appearances on TV shows like The Today Show and The Meredith Vieira Show, and being featured in major outlets like The Wall Street Journal, The New York Times, Cosmopolitan, Refinery29, and more. According to Apfelbaum, cooking is made much more fun when you can ask yourself how you can come up with the newest and coolest recipe that has the potential of going viral. Her first viral recipe was Drunken Hassleback Salami. 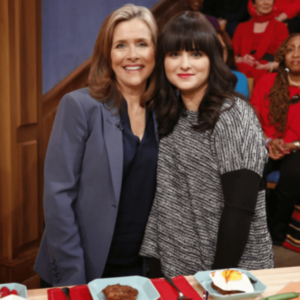 Apfelbaum’s modern take on Jewish food has reached non-kosher Jews, sparking an increased connection to Judaism for some – a result that is meaningful to a Lubavitcher like Apfelbaum. Her recipes and Instagram persona have touched the lives of the non-Jewish world as well, both by breaking down stereotypes and inspiring.

Although, it’s hard at times to be embraced by the larger world due to the nature of kosher cooking, keeping strictly kosher has its perks as it gives Apfelbaum a way to rise to the top of her niche (which is a smaller pool as opposed to being at the bottom of a huge pool of other regular chefs and food bloggers). Instagram stories have been a major help in boosting the Busy in Brooklyn following and because of its popularity, Apfelbaum was once invited to do an “Instagram takeover” by Instagram where she got to send them her videos which they posted it on their account for the day.

Does Shomer Negiah Have Allowances for Work or Medical Reasons?

Kiruv Organizations Must Stop Sending Participants To Places That Reject Them