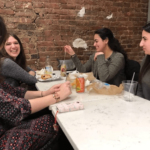 As a Modern Orthodox Jewish girl growing up in Borough Park, Brooklyn, I never imagined I would get the chance to represent this tiny population of misunderstood Jews to the world. I was lucky enough to gain this platform on a German reality TV show called “At 18” – a coming of age show that features young adults in a variety of cultures. (The casting call was publicized by Jew in the City!)

In the beginning of filming, I was completely nervous and at times felt clueless as to what to say and how to explain the sacred laws, customs, and practices that I’ve been living and breathing for nineteen years. There was a cloud of doubt stationed over my thoughts as to whether I was good enough or wise enough for the role.

As the hours went by, I became more comfortable due to lead journalist Meike Weinzierl’s good-spirited nature and guidance. Soon enough, I built up my confidence and purposefulness which pushed me to walk with my chin up despite the anxiety regarding what viewers might think. I was mainly worried about my love and commitment for my Judaism not translating in the way I desired it to on the TV screens at home.

It took me numerous takes to realize that it was okay to answer questions through my own lens and current lifestyle. It was okay to feel partly inadequate too since I had no pep talk or practice beforehand. I soon discovered that my unpreparedness actually contributed to the project’s authenticity because there was no trace of cookie cutters nor eloquent script writers whispering in my ear.

I was able to speak freely from the heart that my parents brought up and the brain that has 15 years of Jewish schooling (not including my gap year spent in Israel) copyrighted all over it. With all of that in mind, it was a Thursday when we started shooting and visited my dorm room in the city (I attend Stern College) where I was asked some questions on the fundamentals of Judaism while going about my usual, end of week business: catching up on school work, packing to go home for Shabbat, and cleaning up my space for the upcoming week.

Things like Shabbat, kosher, Israel etc. were the main focuses of the conversation. Responding to the questions was fun yet difficult since there was so much material to choose from and multiple angles at which to define their objective meaning and then expressing what it means to me personally.

I had to come up with ways of highlighting as many points as I could that I thought best embodied these major topics. Editing and filtering was not easy, but we did it somehow thank G-d.

The next day, we headed home to Brooklyn and I had the opportunity to introduce my cool, Israeli parents and have them star in the film. It was quite the chavaya (experience) to shoot with them. Later, I gave the crew a tour of the famed 13th avenue in Borough Park where all the hustle and bustle, mingling, and money making happens.

Misconception – BP is not a Hasidic shtetl, yet there are enough strollers and streimels to go around. It was greatly beneficial being on the ground because it had animated all the things I was conveying up until then.

They got to see the diversity of people living in the neighborhood and how even the simplest or farthest looking Jew was still able to call it home. It’s remarkable how much of this experience had been a mutual growing process.

As much as the T.V. crew learned from me, I had learned a lot from them. They opened my eyes, unknowingly, to see that I hadn’t been completely honest with myself till then. I was living by what I knew was true but not fully knowing what that was exactly. It prompted me to do some digging, practice mindfulness with my religious activities, and to strive for genuine experiences within my spirituality; to truly feel its warm spark in my life. I was also super grateful to have fulfilled a childhood dream of mine, which not many can say, and that was to be on T.V.

This wasn’t a Disney Channel acting gig but nonetheless, it had actualized an even more worthwhile dream that takes much courage – speaking your truth and proudly making it known to the world.

Finally, the illusion of distance formed by geography had been replaced by my discovery of networking. I experienced a profound sense of belonging within the chain of humanity. I realized that linking myself to another piece, coming from across the globe, is essential for the growing exchange of ideas and healthy development of the world.

When Does Judaism Say Forgiveness Should Be Granted?