What is a Kesubah (or Ketubah)? Why is It Good For Women?

What is a kesubah (or Ketubah) exactly and why is it good for women?

Thanks for your question. The kesubah (“ketubah” in Sephardic pronunciation) is usually translated as “marriage contract.” Basically, it’s a prenuptial agreement that outlines a husband’s obligations towards his wife.

Husbands and wives each have rights and obligations to one another. The Talmudic tractate of Kesubos, which deals with marriage contracts, spells them out. The Sages also enacted a number of things to strengthen the woman’s position because, historically, women have been the more vulnerable party. The kesubah reflects such enactments. The language of the kesubah is typically Aramaic, which was the commonly-spoken language in the time and place where the kesubah was instituted. A typical kesubah would read as follows:

(Bride) consented and became his wife. The dowry that she brought from her father’s house in silver, gold, jewelry, clothing, furniture and linens, the groom accepts in the sum of _______ silver shekels and he agrees to add this to the above amount, making it _____ silver skekels in total.

(Groom) said, “I accept upon myself and my heirs responsibility for this marriage contract, dowry and additional amount, to be paid from the best of my possessions, whether I currently own them or may acquire them in the future. All my property, both real and personal, even the clothes on my back, are mortgaged as security to pay this marriage contract, dowry, and additional amount, both in my lifetime and after my death.”

The balance of the text is some legalese that I won’t bother translating here as it doesn’t pertain to our topic. The document is signed by two valid witnesses and it is read under the chuppah at the wedding ceremony. If a woman’s kesubah is lost or destroyed, the couple is not allowed to live together until it is replaced. In the event of the couple’s divorce, the woman is meant to be paid the amount agreed upon; in the case of the husband’s death, she should receive this amount before other heirs inherit from the estate because, as noted, all of the husband’s property is mortgaged to this debt.

In practical application, the kesubah no longer serves as a valid legal contract, at least American civil law doesn’t recognize it as such. In a 1974 case (In Re Estate of White), the New York State Supreme Court refused to recognize the kesubah as a formal legal document on the basis that “even for the observant and Orthodox, the ketubah has become more a matter of form and a ceremonial document than a legal obligation.” There are several reasons for this failure to recognize the kesubah as legally binding under civil law. Among these are the fact that none of the parties in the agreement typically speak Aramaic (in which the kesubah is written), the document is signed by witnesses rather than the parties themselves, and we don’t know exactly how much the currencies of “zuzim” and “zekukim” translate into in dollars.

Because the kesubah has ceased to be an enforceable document in our society, and because of a problem with husbands refusing to grant their wives divorces, it has become popular in recent years to write a “halachic pre-nup.” This is a document that would be enforceable in secular courts to ensure that recalcitrant husbands live up to their obligations. But the halachic pre-nup does not take the place of the kesubah, which remains an obligatory part of a Jewish marriage. It was rabbinically enacted specifically to protect the woman’s interests. The fact that certain realities in the current day and age may require additional safeguards doesn’t change that. 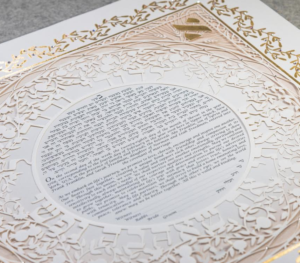 This post was sponsored by Ketubah.com, the world’s leading provider of museum-quality fine art Ketubahs, designed by established and emerging Ketubah artists. Their individualized customer service and wide selection includes over 500 popular designs not available elsewhere. Visit Ketubah.com for more information and to view their varied and stunning designs.

Meet the Hasidic Hacker Who Was Ranked 22nd Best In the World!