Often in life, resume and eulogy qualities are confused, but this was not the case for Chaim “Lobo” Silber, of blessed memory. Born and raised in Brooklyn, Silber attended Torah v’Daas and Brooklyn College with a degree in math, which he used to manage his computer leasing company, a company that was extremely profitable. But the incredible thing about Silber was his warm and giving personality, causing him to lead a life of exceptional kindness. His close friend and colleague, Heshy Walfish, explains that his was “an inspirational life to be a part of,” a statement so evident at his funeral this past March as it required a limit of speakers “or else we would have been there for days.” 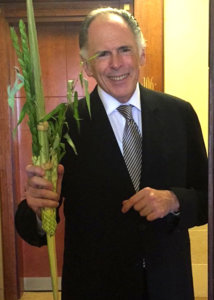 uld meet a stranger, literally a stranger, somebody he had never met, engage them in conversation, and some stray remark about something would trigger in him a search for a way to help this person,” remarks Heshy. Silber’s biggest influences were his parents, specifically illustrated through a story retold of his mother who asked a friend to bring her sugar for her coffee in a hospital cafeteria while she was visiting the sick. Another friend returned with sugar sooner and while his mother kindly thanked the friend who brought her the sugar first, she refused to use it so as not to upset the first friend who had gone to help her. The careful attention to people’s feelings he learned from his parents helped Silber aspire to greatness himself.

Since he was a young child, Silber knew that he wanted to help people. “He regarded all the blessings that he had in his life… [and recognized that] as something that he was blessed with that was not his to squander, that was not his to waste.” This weltanschauung prompted him to assist anyone and everyone who needed, whether or not they asked him directly. Due to his profitable business, Silber was able and forthcoming with any aid he was able to provide to others. He would look into any situation that came his way and figure out how he would be able to help individuals, in a private and respectful manner.

Everybody knows that “anybody who met Chaim became a friend,” easily making him one of the most popular men around town. Even during the end of his life, when he was bound to his bed due to his illness, he received numerous invitations “to simchas that no one else had… because he viewed it as an opportunity,” and knew exactly how to respond to each and every invite. His main concern was other people’s happiness, causing him to attend multiple events each night, just to wish each person a mazel tov.

Silber also founded and supported “the Lobo sports teams,” beginning with softball and expanding to many different sports for kids of all ages across the United States and Israel. The only rule of the Lobo teams was that “you had to live up to the ideals of being a Lobo and that meant being a mensch, being sportsmanlike, playing with respect, having kavod and honor for your teammates and your opponents.” Silber sensitively and effectively taught all children he met that message and they in turn carried his beliefs with pride. “He was a team player in the ultimate team, the team of Am Yisrael…and I have no doubt that while we will never be able to replace Chaim Silber, we can certainly try and emulate him going forward.”

Arianna Stone is a sophomore at Yeshiva University's Stern College for Women, majoring in marketing and communications. She recently completed a gap year studying and traveling abroad. She is originally from Silver Spring, Maryland.

When is Moshiach Coming?