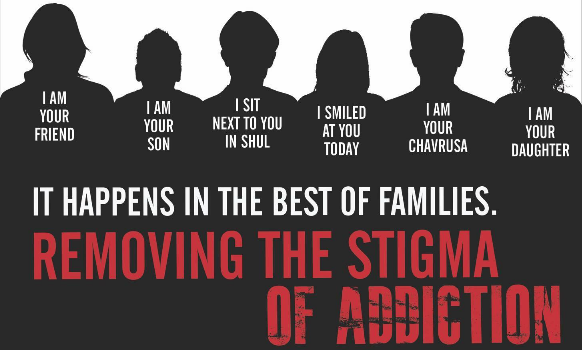 While the problem of drug addiction is a universal one, much of the Orthodox Jewish community has not always been comfortable facing it head on. Thankfully, change is beginning to taking place with a raising of awareness like never before. With more than 700 people coming to an event last Monday night in Brooklyn sponsored by Amudim, OHEL, Our Place, the SAFE Foundation, Relief Resources, The Flatbush Jewish Community Coalition and United Task Force, leaders spoke of how we can tackle the challenges of abuse and addiction within the community and remove the associated stigma. The event was lived streamed and garnered thousands of viewers online.

The founder and director of Amudim, Rabbi Zvi Gluck, said “[this event is] the first step towards bringing acceptance and support to those in crisis.” Unfortunately, many of those who have become addicted don’t ask for help due to concern over the scandal that could affect their shidduch, business or social prospects. “Too many times we’ve had people literally choose death over life because they were too scared to get help.”

The rabbinical advisor of Amudim, Rav Elya Brudny, Rosh Yeshiva of Mirrer, said it was “absurd to not seek counseling because of worries of shame or stigma.” He noted that a good number of those who become addicted to alcohol begin as children and asked all in attendance to prevent children from getting alcohol at bar mitzvahs, weddings and the like.

The event was headlined by three keynote speakers: Rav Brudny, alongside Amudim’s clinical supervisor, Dr. Akiva Perlman, and OHEL’s internationally-popular Dr. Norman Blumenthal. Dr. Perlman shed light on the shame felt by addicts on a daily basis who are hard-pressed to find resources in Flatbush and Boro Park in particular. He said, “We have to continue to build and build and build so that there is no one who is alone and people don’t have to live in secrecy and in shame when they are dealing with these issues.”

Dr. Blumenthal addressed the importance of asking for help before issues become crises. A live training demonstration followed where the life-saving drug Naxolone, which reverses the effects of an overdose on opioids was highlighted. This drug is now available for free at authorized distribution centers throughout New York. Dr. Blumenthal called the event both “sobering and inspiring…The need for hundreds of community members to learn about addiction reflects the encroachment of these destructive trends in our world. On the other hand, the willingness of hundreds to face the reality of addiction and the collective need to combat it gives us cause for great hope and optimism.”

Anyone who has experienced trauma can put the past behind them. This idea was put forward by a surprise guest speaker named Ike, who openly and emotionally revealed how addiction tore apart both his business and his marriage. After failed stays in rehab, The Safe Foundation stepped in and saved his life. Ike has now been drug-free for several years. Remarried as well, he attends support meetings on a regular basis and wants to help others who are in recovery, as well as encourage others to similarly pay it forward. He said, “I am for the first time proud to say that I’m a Jew, seeing all these people standing here and accepting that these issues are real.”

Tragically, the number of overdoses in the frum community is shockingly high. This event put the conversation on the front burner, as that now rabbeim, families, schools and friends can feel more comfortable to start a conversation with those who struggle. Community leader Chesky Stern noted that, “If we take a second step and a third one, we may not be able to conquer the problem completely but maybe, maybe we can make some inroads. There is no way to know how far we are going to get, but it is our obligation to keep trying.”

Amudim is proud to note that events such as these, while unfortunately necessary, produce results in the form of the number of calls it receives the following day. In turn, this translates to lives that are saved. By partnering with other organizations at further events, Amudim is trying to spread awareness as far as they can. “When we are able to bring even one person back from the brink of destruction, the effects are far greater than most people realize,” said Gluck.  “All too often we have mourned the death of an individual who died of an overdose, but it isn’t just one life that has been lost. Their future generations will never be born and the lives of their friends and family members are irreparably shattered. By helping just one person, entire worlds can be built and by working together we can facilitate change that will have positive and life-saving effects that are far beyond anything we can ever imagine.”

To find out more about Amudim or to plan event in your community visit them online at www.amudim.org or call them at 646-517-0222.