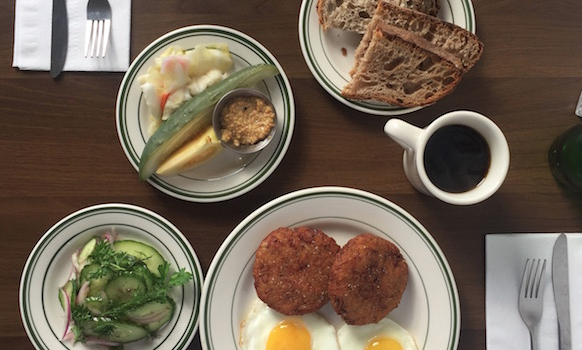 This New Kosher Deli May Be Miami’s Hippest Restaurant

The instant success of Stern’s deli isn’t too surprising given that Zak the Baker — both his bakery and the man himself — have garnered numerous accolades since setting up shop four years ago. Stern has achieved the seemingly impossible: His eateries are decidedly cool and are popular with Miami’s hipsters and foodie sets, however, because they are kosher, they are a destination for observant Jewish Miami residents and visitors, many of whom travel 20 minutes from the city’s more touristy areas to partake.

New York-based distributor FilmRise has taken the worldwide distribution rights to Jessie Auritt‘s Supergirl. The coming-of-age documentary explores the life of Naomi Kutin, an Orthodox Jewish pre-teen, who, at the age of nine, broke world records in powerlifting and became an international phenomenon.

A service created by a Chabad couple in California, which provides free, homemade kosher chicken soup to ill students and members of the local community, is being lauded on social media. On a Facebook page created for parents of students at Cal Poly State University, parents are talking about how many times their children, both Jewish and non-Jewish, have benefited from “Chicken Soup Express,” the brainchild of Rabbi Chaim Hilel and his wife, Miki, of Chabad of San Luis Obispo & Cal Poly-Rohr Center for Jewish Life.

Move over normcore – Modern Orthodox fashion could be the next big trend. The goal of Heimishe Ventures, a line of wool hats, baseball caps, aprons, baby bibs and assorted accessories, is to bring the Hebrew concept of “Heimishe” to secular people, while making Hasidic folks who already understand the idea proud of themselves and their originality, founder Seth Braunstein said.

Kosher Food Goes Up in Smoke

A kosher restaurant is bringing Texas barbecue to New York – by way of the Borscht Belt. Main House, set to open this month, will serve up ribs with cornbread and peppery potato salad to diners in Mill Basin, Brooklyn, but its owners learned about barbecue years ago, miles away from the city.