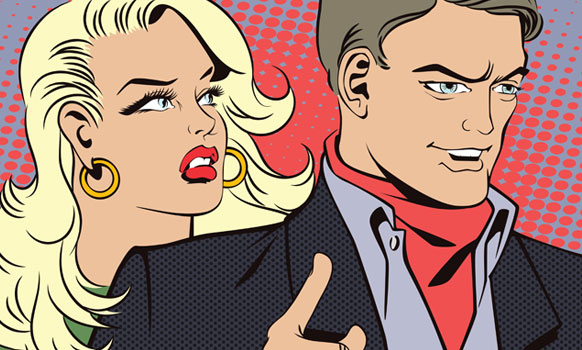 “Your desire will be for your husband, and he will rule over you.” (Genesis 3:16). As an Orthodox Jewish woman, the first time I saw this verse in the Torah, where Eve is cursed with her husband ruling over her (as a result of having eaten from the fruit of the Tree of Knowledge of Good and Evil), I was pretty upset. Sure, Adam is punished too with banishment from a Utopian existence, having to toil for his livelihood “by the sweat of his brow” for the rest of his life. But Eve’s curse felt worse. My husband doesn’t “rule over me,” we’re equal partners. And the idea that God would declare a wife subservient to her husband because of one mistake that happened thousands of years ago is really hard to come to terms with. So how do we deal with this part of the Torah?

First off, it’s important to note that the Talmud teaches that “A man must love his wife as much as himself and honor her more.” So Judaism doesn’t actually believe that a woman is meant to be treated less than. Second, if this verse was really about a wife being submissive to her husband, wouldn’t the curse just have been “He will rule over you”? Why begin it with “Your desire will be for your husband?” I didn’t have a sufficient answer to this question for years until I stumbled upon a possible one in a most unexpected place: Tinder.

A close friend of mine recently saw a Vanity Fair article about Tinder which described it as “the dating apocalypse.” According to the piece, people are using this popular dating app in a most disgusting way, as one investment banker quoted explains, “It’s like ordering Seamless, [referring to the online food-delivery service] but you’re ordering a person.” According to the article, men are hooking up with numerous women every week, in some cases, “ordering” the next one even before they have even said ‘good bye’ to the previous one. “You can’t be stuck in one lane…There’s always something better,” explains one Tinder user from VF. “If you had a reservation somewhere and then a table at Per Se opened up, you’d want to go there.”

According to Vanity Fair, women – smart women, successful women – are unhappily playing along. The women interviewed complained how unfair the system is. “It seems like the girls don’t have any control over the situation, and it should not be like that at all…Sex should stem from emotional intimacy, and it’s the opposite with us right now, and I think it really is kind of destroying females’ self-images,” says a woman named Fallon. “It’s a contest to see who cares less, and guys win a lot at caring less,” adds her friend Amanda.

My Orthodox Jewish friend, happily married with several children, was flabbergasted at the state of the dating world as described in Vanity Fair and told her husband what she had read. “Some guys are hooking up with 5 different women a week,” she exclaimed. “That’s crazy,” he replied. “Like 2 or 3, I could imagine. But 5 – that is nuts!” My friend was shocked. She made her husband repeat what he had just said, at which point her husband realized he had made a grave mistake. “Didn’t she feel the same way? Wouldn’t it be exciting to sleep with 2 to 3 random men each week, the novelty of it all?” he asked. She explained to him that this idea was not the least bit appealing to her. That while she may have felt an attraction to other men from time to time, sex for her was about love and intimacy. Just like the women in the article said.

She called me, devastated. Her husband was supposed to be one of “the good guys,” and these were the thoughts he was having? I pointed out that he IS one of “the good guys.” He was open and honest with her and took time to understand that her feelings differed. And more importantly, not only is he faithful to her in their marriage, as an Orthodox Jewish man who is careful about Jewish law (shomer negia and shmiras anayim) he doesn’t even touch other women and tries his best to save his eyes only for her body.

As I thought more about the discrepancy between what most men and women “desire” (yes, I know there are exceptions), I suddenly remembered the curse of Eve that had bothered me years before. Eve (and much of womankind after her) would desire to be their husbands’ one and only. But their husbands would “rule” over them in this game. In fact – they would “school” them in this game, because the Hebrew word used in this verse to mean “rule” is “moshel” which also means “to instruct.” Much like how Tinder seems to be playing out: if you try to compete with us as to who cares less about random hookups, we will school you every time.

Now, I admit, this is a pretty awful curse. It’s not the “subservient” curse I feared, but it’s still pretty painful to consider that many women seem to be hardwired to want love and intimacy in sex whereas many men are pulled towards novelty with no strings attached. But a curse is not an ideal. It’s a fallen state. It’s a brokenness. But yes, it is a possibility in the world we live in now.

We were kicked out of a Utopian Garden and thrown into a jungle. Apps like Tinder further enable the men in this jungle to run wild. But we need not accept it nor play into it. Both sides can remove themselves from this dynamic. The Jewish ideal, as we said, is for a man to love his wife a much as himself and honor her more. Loving his wife as much as himself, is no different really from the Torah commandment to “love your neighbor as yourself.” But “honor her more” what does that amount to for men? Treasuring her. Cherishing her. Making it so that she is his one and only. What does it mean for women? Not settling for anything less.

Does Judaism Believe In Witchcraft and Magic?