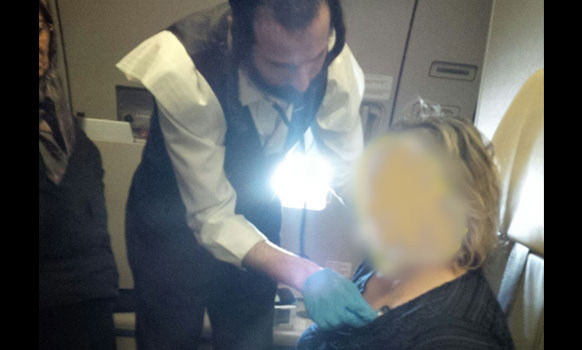 When Hasidic men on airplanes are in the news, it’s generally not for a good reason. But what about all the polite and positive interactions that go on everyday, unreported? Or the heroic ones, like what happened on a flight this week from Tel Aviv to JFK, when two Satmar Hasidic men saved the day? Reb Beirish Shonbrun and Reb Avraham Meir Miller of Kiryas Joel, New York, were on a trip to Ukraine to support a small yeshiva in Kuresteen, where dozens of Jews are beginning their journey to an observant Jewish life. For the past 15 years, they have visited the community nearly monthly to teach them Torah, sustain them, and to help them make simchas (Shonbrun is a mohel in addition to running two businesses). They were just there to celebrate a Bar Mitzvah in Kuresteen and a Torah dedication in Israel and were flying home on Turkish Airlines.

The flight was halfway through its 10 hour travel time, and the plane was somewhere over the Atlantic Ocean. Most of the passengers were asleep, but an Arab woman wasn’t feeling well. She had gone to the plane’s rear galley to get help from a flight attendant, and as she approached the galley, she collapsed. An announcement was made asking that if anyone had medical training they should alert a flight attendant immediately. Not only is Shonbraun a Mohel and a business owner, he and his friend Miller are also longtime members of the Kiryas Joel Hatzolah (Shonbrun for 12 years and Miller for 20). Shonbrun immediately ran up the aisle towards the galley to help, while calling for Miller, who was asleep at the time, to wake up. Shonbrun recalls “I had my kit and licenses with me. Even though there was a doctor on the plane, he didn’t have his ID and so they had me help.”

The woman was unresponsive and Shonbrun did what he could to wake her. When she became responsive again, she was began throwing up, and Shonbraun helped clean her up and take her vitals.”By the time I got there,” Miller says,”Beirish was working hard to get a story out of her. We gave her water and ice and helped her sit up.” Miller worked with a hijab-wearing translator to get a medical history since the patient spoke no English (or Yiddish). “We stabilized her,” Shonbrun says, “The pilot asked if we needed to make an emergency landing, but by that time, she felt much better. We were able to avoid it.” When the woman was safely back in her seat, Shonbrun and Miller told her where they were sitting so that she could follow up if need be. They went back to their seats. Miller recalls, “The service was nice to begin with but from that moment on, everyone was just thrilled. Everyone couldn’t thank us enough.”

Back in New York now, Shonbrun is very humble about the whole experience. “I became an EMT when I was young. In addition to my businesses in contracting and in roofing and siding…I grew up in Williamsburg and moved to Kiryas Joel when I got married 20 years ago. I try to help people all day.” He is demure when asked about the lasting impact of the incident. “It was a nice kiddush Hashem. A man came up to me and told me that he never saw anything like this. ‘How did I do it?’ He asked me. He only ever sees Chasidim turn the plane upside down. But not this time.”