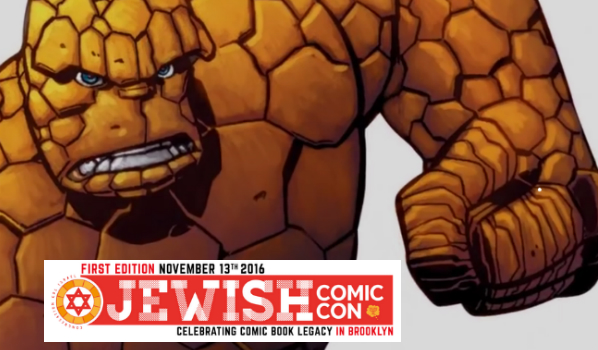 What does a comic book creator from France and a Queens-born portfolio manager have in common? Aside from being observant Jewish men, Fabrice Sapolsky and Fred Polaniecki co-created the first Jewish Comic Con, being held this Sunday November 13th at Brooklyn’s Congregation Kol Israel. There are many annual conventions such as the New York and San Diego Comic Cons, but never before has there been one catered to the Jewish community, featuring creators, themed discussions and tributes to the long-standing history behind this perennially-beloved medium.

Fred, who grew up Orthodox, relates, “I was just a fan as a kid from Queens: home turf of Peter Parker and Spider-Man. I read the Batmans, the Spider-Mans, the Supermans, but then I gave it up for many years. My son was getting into Mad Magazine and gave me an opportunity to rediscover comics.”

Fandom became a mission for Fred when he met former comic book journalist Fabrice at shul. Fabrice recounts, “18 years ago I created a comic news magazine called Comic Box. I got an idea for Spider-Man Noir, a reinvention set in the 1930s. That appealed to Marvel Comics and another very talented writer: David Hine. We co-created and wrote it for a while. [Then] I ventured into the creator-owned comics business. My new monthly series Intertwined is being published by Dynamite Comics.” While growing up secular, Fabrice connected with EEIF, a Modern Orthodox youth movement (think NCSY meets Boy Scouts). “Jews and comics have been the the worst kept secret in comic book history. The founders did everything they could to hide the Jewish roots of the characters.” Fabrice saw no need to withhold his own relationship with Judaism. “Creating the Jewish Comic Con is like coming out of the closet. I had been very shy about it in my career and now it’s open.”

Fred’s family attended Young Israel of Forest Hills. He began working in finance and became president of Kol Israel. “Comics were huge in the yeshiva world growing up.” A rabbi who had once confiscated his later told Fred, “We never threw them out… we kept them!” Fred saw that the Jewish connection to comics was ripe for exploration. “I appreciate the originators who were Jewish for the most part and created this genre. It’s exploded today with hundreds of people who follow these creators and dedicate their lives to the storytelling and art of comics.”

On the genre’s enduring popularity Fred says, “In a changing world…people are looking for something to hold onto. Certain things ring true for decades. ‘Truth, Justice and the American Way.’ That doesn’t change.” Fabrice agrees, “Comics are more relevant than ever and have never been more popular than they are today thanks to movies and video games. The entire entertainment industry revolves around comics. Its their R&D (Research & Development). When people see Disney / Marvel’s new movie Doctor Strange, they won’t see him as a comic book character but as a movie character.”

Armed with their common passion, Fred and Fabrice opened a Jewish art gallery at the shul and created the con. “The entire event is dedicated to Jewish roots and the creators that are working today, while hopefully inspiring future artists and creators.” This con isn’t just Jewish, it’s frum. “We are a comic con that starts on Motzaei Shabbos. Rabbi Samuel Reinstein and Rabbi Schwartz will be leading Shacharis and will give over a quick vort before the con starts and we’ll break for Mincha and Maariv.” When asked if it was hard to convince the spiritual leaders of Kol Israel to participate, Fred laughs. “It turns out that both our rabbeim are huge comic fans! Someone pointed out to me that in the Telushkin book Rebbe, the [Lubavitcher] Rebbe was a fan of Dick Tracy. So I’m on a mission from G-d.”

This Saturday night, there will be a special preview party for con attendees and panelists, featuring 14-piece swing band ConSoul and Bartenura wine. An auction of original artwork will benefit Kol Israel’s planned renovation. On Sunday, numerous panels will be held on what makes Judaism and Comic Books so inextricably connected. “The whole idea is to really investigate the tie-in. Jordan Gorfinkel, who went to Ramaz, will explore comics and faith…The History of Jews and Cartooning in New York led by New Yorker artist Mort Gerberg. Danny Fingeroth and other historians will discuss Will Eisner, Joe Kubert and more. Kubert had his own connection to Yiddishkeit. He would be kvelling from Heaven.”