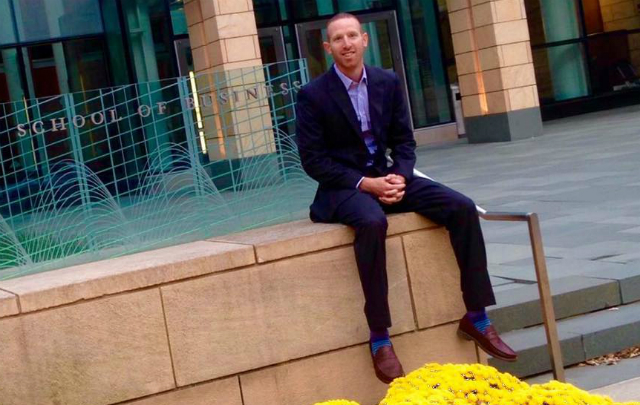 Meet Tamir Goodman, The Yid Who Could Dunk

Tamir Goodman was dubbed the “Jewish Jordan” in 1999 by Sports Illustrated as a high school basketball player. Ranked among the top 25 drafted high school athletes in the year he graduated, he averaged 35.4 points per game while remaining Shomer Shabbos. He was named MVP of the prestigious Capital Classic All-Star game, a title previously held by Shaquille O’Neal and LeBron James. He made history as first Jewish player to play Division 1 sports while wearing a yarmulke and not playing on Shabbos. Since leaving a pro basketball career, he has become a successful entrepreneur, coach, educator and motivational speaker. So how did the Jewish Jordan come to be?

According to Tamir, his father was one of the first lawyers in the US to wear his kippah in court. His mother is Israeli and his grandmother is a Holocaust Survivor. Their house in Baltimore was a chesed house with Jewish pride and joy, and close ties to Chabad and the Lubavitcher Rebbe. “I grew up in the right environment to help me pursue my dreams because…there was no conflict between the physical and the spiritual. You love basketball, okay…just go for it 100% and find a way to make a Kiddush Hashem through your talents…your journey.”

As a child Tamir remembers wanting to “…show the world that you can play Division 1 basketball and keep Shabbat. That was my goal, even from a very young age.” During high school, he attended an invitational camp where Division 1 coaches were in attendance during an All Star game he played in. The rest was history. He openly acknowledges Hashem’s presence in making this happen. “I went from nobody knowing me to top colleges knowing who I was in literally after one game…I got the perfect exposure…It was a sign…Hashem was going to help me out.” Before that he played for the Tamudical Academy of Baltimore. “My senior year of high school I transferred to a Christian school where they didn’t play basketball on Shabbat either…[it] was the first time I was in a non-Jewish environment for the majority of the day.” Tamir was never put down for being Jewish, and was defended by his teammates. “There was a tall center nicknamed ‘Tree.’ The bus would stop at a non-kosher restaurant so I would bring my own food. The restaurants didn’t like it. But…Tree would say ‘Look…if you don’t let him eat his food here, I don’t think any of the guys are gonna come eat in here, so you probably don’t want to lose that business.’”

He passed up a scholarship to top-ranked University of Maryland and missed winning the NCAA Title. But Tamir, didn’t flinch in his commitment to Judaism for even a moment.“I missed the championship ring but the ring of Shabbos lasts forever,” he explains. Tamir instead chose Towson University because they would accommodate his Shabbos schedule. His non-Jewish coach worked hard to schedule games for Saturday nights. “The only game I missed was a post-season game [beyond the coach’s control]. I sat out on a Friday night, and after the game was over, my entire team came to my hotel room and said ‘Tamir…we won the game for you. We won the game for Shabbat. We respect so much that you didn’t play in the game tonight.’ So even though I didn’t physically play in the game, I feel like spiritually I did play, because they won the game for me.”

Tamir found that his non-Jewish teammates loved Shabbos. “They got to chill out more and they came to appreciate it.” Additionally, Tamir’s mitzvah observance on National Television inspired Jews around the world. “I still get letters from all sorts of people in all sorts of professions who say ‘I never wore my kippah when I went to work, but then I saw you in Sports Illustrated and I started wearing my kippah. Throughout my whole journey, it’s never been about me. It’s always been about the Jewish people. I’m definitely not a tzadik… but I’ve always tried to fulfill my potential with what Hashem expected from me. It’s always been about something bigger than myself…it’s allowed me to…keep going. Judaism was always my blueprint, it was always my destination of how I need to react or where I need to go in any situation… We’re lucky to have that.”

After Towson, Tamir moved to Israel to play with Maccabi Tel Aviv and other Israeli teams before joining the IDF. He also played briefly for the Premier Basketball League in Maryland before joining Maccabi Haifa, eventually retiring due to multiple injuries. In terms of breaking boundaries of being a Jewish athlete, Tamir followed in the precedent of the heroes he looked up to as a child. “Doron Shefer was an Israeli, the one overtly Jewish player that played for UConn, one of the top college teams.” Doron spoke about Chanukah on TV and for 5th grade Tamir, “it was the coolest thing the world. There was Sandy Koufax and there was always Jewish spirit out there…in every generation, every athlete, we [have to] try to increase the Jewish spirit more and more.” Tamir’s father was instrumental in helping him push those boundaries. “I played professionally in Israel because it was my dream, but I wouldn’t be shocked if there was someone [who] could be accommodated in the NBA one day. Ultimately a Division 1 school changed their schedule for me. I did not… play one game or practice on Shabbos. And I was on a full athletic scholarship and everyone told me that that was going to be impossible…but they did [it]. The greatest reality of the world is that nothing is impossible.”

Tamir has since created Sports Strings, an athletic tzitzits brand, and has sent them to IDF soldiers. Along with his wife Judy, he wrote a book “The Jewish Jordan’s Triple Threat.” He also created a training aid, the Zone 190, to help basketball players enhance their training which is now being used in the NBA. Tamir’s advice to young Jews is earnest and profound: “Be very persistent and proud of who you are. Judaism is always there to help you reach your potential, not take away from [it]…You have to realize that everything does come from Hashem but on the other hand you have to take what Hashem has given you and be proud of that and confident with it, and reach as far as you can with it.”