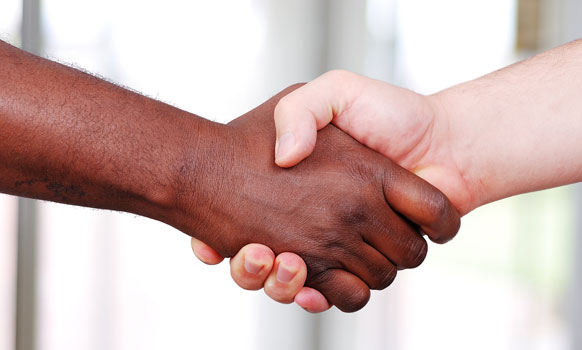 Does The Torah Support Racism?

With all the horrific shootings going on recently, it got me thinking about racism in the Jewish world. I’ve heard people claim there are racist sources in the Torah and Talmud. I hope that’s not true. Can you clarify? Do Orthodox Jews who are racist have sources to back up their hate?

In my opinion, no. There is no Torah basis to justify hatred based on race. Throughout Tanach (the Jewish Bible), people fight about all sorts of things – battles over land, over theology, over the crown, over women. Some of these fights are just, others are misguided or outright wrong, but in no place do we see people fight over the color of one’s complexion, nor does the Torah ever declare people of skin color A superior to people of skin color B.

There are, however, some things that people may use to justify as supporting a racist agenda. These can often be found on anti-Semitic web sites that exist to “prove” that Judaism is racist, misogynistic or (believe it or not) pro-pedophilia. They do this by taking sound bites out of context. (This is like when a movie review calls a film “a spectacular failure.” The film then excerpts this review as: “…spectacular…” – The Times.)

I have seen on these anti-Semitic sites that Maimonides calls black people somewhere between monkeys and humans. I looked up this supposed source and, sure enough, he doesn’t say that at all. What he says is that a person is not wholly human without God since he is missing an essential spiritual component. People to whom this applies, he says, include the Turks in the north, the Ethiopians in the south, and people in his own country (Guide for the Perplexed III, 51). Clearly Maimonides is making a statement about theology, not race.

Here’s something else that looks horrible at first glance: Rashi on Genesis 12:11 cites a Midrash that calls the Egyptians “black and ugly.” That seems pretty straightforward until one looks more closely.

Compare this with Song of Songs 1:5, in which the woman says, “I am black but beautiful.” If she’s black but beautiful, clearly she’s an exception. Therefore, under normal circumstances, black must equal ugly, right? Not so fast! Context matters, remember? The very next verse continues: “Don’t stare at me for being blackened by the sun. My brothers were angry with me and they made me tend the vineyards….” Now it is clear that we’re not talking about race but about overexposure, which we all know can wreak havoc through sun damage.

You might still argue that Rashi on Genesis 12:11 is talking about race but consider this: the Jews and the Egyptians were racially identical. If you don’t believe me, check out Exodus 2:19, in which Jethro’s daughters say, “An Egyptian man rescued us from the hand of the shepherds; he also drew water for us and watered the flocks.” If the Jews were white and the Egyptians black, how could Jethro’s daughters mistake Moses for an Egyptian?

What about the “curse of Ham” (by which we mean Noah’s son of that name, not the non-kosher meat)? This was an excuse used in Civil War times (not by Jews, by the way) to justify slavery as God’s will by pointing to the curse given by Noah in Genesis chapter 9. There we are told how Noah planted a vineyard, got drunk, and was naked in his tent. His son Ham saw and told his brothers, Shem and Japheth. They took a blanket, looked away, and covered their father. When Noah sobered up, he “knew what his son had done to him.” (Sodomy? Castration? Mockery? General indifference? The text doesn’t specify.) In any event, Noah cursed Ham’s son Canaan that his descendants would be slaves to the descendants of the other brothers.

I have several problems here. First of all, a curse is not a command. If Noah cursed Canaan that his sons would be slaves, as soon as it happened, the curse would be fulfilled. That’s not justification to keep doing it. It’s similar to God’s prophecy to Abraham that his descendants would be slaves in a foreign land. If so, why were the Egyptians punished for fulfilling God’s word? Two reasons: (1) God said the Jews would be enslaved; Egypt didn’t have to be the ones to do it and (2) even if God wanted them to do it, they overdid it, treating the Jews far more harshly than would have been necessary to fulfill the prophecy. Similarly, a plantation owner had no responsibility to fulfill Noah’s curse but he does have a responsibility to do the right thing.

My other problem with the “curse of Ham” is that the African races are indeed descended from Noah’s son Ham – through his son Cush. Canaan is the ancestor of – follow me here – the Canaanite nations. Enslaving the descendants of Cush does not fulfill the curse against Canaan. To do that, you would need to find yourself a Hittite or a Jebusite.

There is one incident that is apparently race-based. Numbers 12:1 says, “Miriam and Aaron spoke against Moses regarding the Ethiopian woman he had married, for he had married a Ethiopian woman.” Now, Midrashically there is a whole different understanding of this incident (Miriam and Aaron complained that Moses was ignoring his conjugal duties, etc.) but the simple reading of the Torah is: Moses married a black woman, his siblings complained, and God punished them for it. My takeaway from this is (1) Moses was not a racist, since he married a black woman and (2) if anyone complains about such a thing, God says, “Don’t be a hater.”

Upon inspection, it becomes clear that, not only does the Torah not support racism, it’s against it. Genesis 1:27 tells us that man was created in the image of God. The Talmud (Sanhedrin 38b) tells us that God created only one man, from whom all are descended, so that no one could claim superior ancestry.

The Midrash (Sifra Kedoshim 4) records a debate between Rabbi Akiba and Ben Azzai as to the seminal message of the Torah. Rabbi Akiva proposed “Love your neighbor as yourself” (Leviticus 19:18). The problem is that one can split hairs, considering one person to be his “neighbor” but not another. Ben Azzai therefore counters with “This is the book of the generations of Adam; in the day that God created man, in the likeness of God made he him” (Genesis 5:1). This seemingly mundane verse is actually quite profound – it tells us both that all men are brothers and that we are all created in God’s image.

When it comes to racism, the bottom line may be found in the words of the Midrash Tanchuma: “If you hate any person, you hate God, who created man in His image.” So don’t be a hater.

Pokemon Go? Um, No: Jew in the City Unplugged