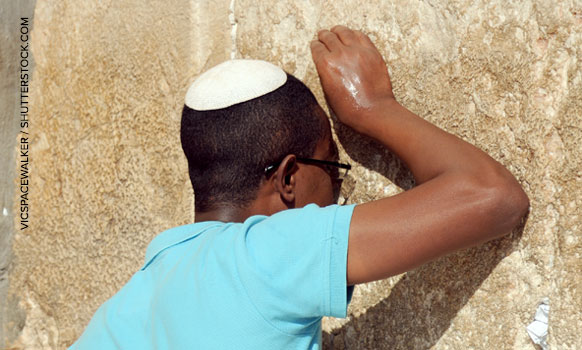 Black Jews: Discovering A Prejudice I Didn’t Know I Had

I have always considered myself an open-minded, non-judgmental person. As a kid, although we were not particularly religious, my parents were strict that that my sisters and I had to marry someone Jewish (for the sake of Jewish continuity), but they were  always very clear that it did not matter what color or ethnicity the guy was. In middle school, my public school classmates spent most of sixth grade picking on a Korean transfer student named Alex because of his Asian features and accent. My best friend Tara and I created an elaborate plan for how we would contact Peter Jennings (the television anchor) who would do a TV special to highlight racism in our school. (We may have written a cheesy song to sing on said TV show, if my memory serves me. OK – we did. I just remembered all the lyrics as I was typing this. Scroll down to see how changing the world looked when I was eleven!*)

Once I became observant, I was immediately drawn to the universalistic ideas within Judaism: that all people are created in the image of God and share a common ancestry in Adam. In nearly two decades in the religious Jewish community, I have heard a very occasional racist comment, but I have always tried to limit the time I spend around such people.

Despite coming from such an accepting background and continuing to associate with like-minded people, a few years ago I made a terrible mistake in this area. I had known a Jewish African-American woman from school who was graduating just as I was arriving, so we didn’t have much overlap or have too many interactions. There was one thing that I did know about her, though: she was a convert. Later, a different African-American woman reached out to us at Jew in the City and said she was strongly considering converting.

She wanted to know if there was racism in the Orthodox community. I told her, “You will find some very closed-minded people, and that is really a shame. But there are also many people, like myself, who are open-minded, non-judgmental and appreciate diversity.” To help her out even more, I decided to connect her with the African-American convert who I knew from years ago so she could give her the inside scoop.

I sent the convert a warm message, asking if she’d be willing to help another woman in a similar situation, but I got back a very surprising response. She was outraged that I assumed she had converted. As it turns out, she was born Jewish and had spent her entire life trying to explain that to people, who like me, had made a baseless assumption that she must have not been born Jewish because of the color of her skin.

I was devastated that I had added to her grief and kicked myself for falling prey to a prejudice I was certain I immune from. I tried recalling how exactly I had come to the idea that she had been a convert. Had someone told me in passing and I automatically believed them? Or had I, a dozen years earlier (and dozen years unwiser) just assumed it and turned the assumption into “knowledge”? I apologized profusely and wondered how I could make things better.

Today, on Martin Luther King Day, I was thinking about this episode and realized that sharing my mistake could help others become more sensitive and maybe stop the next “assumption.” According to the Torah, we’re not supposed to raise the subject of a convert’s past, so I never should have broached the topic with a woman who I barely knew. But there is a second lesson I learned: Hillel taught that the entire Torah on one foot is “What is hateful to you don’t do to another.” While we all know what is hateful to ourselves, it is not always easy to understand how people with different experiences, especially those who don’t fit neatly into society’s “boxes,” might get hurt. So a corollary to Hillel’s teaching is to be careful to realize that something which might not be hateful to you could be hateful to someone who’s in a different situation.

Would you hate my if my skin was brown?

Would you hate me if my eyes were blue-u-u-u?

Give me a chance and you’ll find out, baby I’m the same as you.

Would you hate me if my skin were white?

Would you hate me if my hair was blo-o-o-ond?

Give me a chance and you will see, we will form a great big bond.

People are one as you can see, we should live together in harmony.

Behind the scenes: Hasidim Watch 'Fiddler on the Roof' For First Time