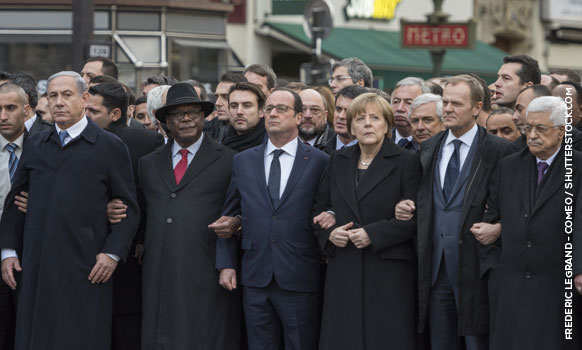 I would like to know what your thoughts are on the recent articles about the newspaper Hamevaser’s photoshopping of female leaders out of the photo of the French Unity March in Paris the other day. By the way, I love your site and I’ve gained a lot of insight into how to be a more observant reform convert.

Thanks for your question and glad you’re enjoying our site! This one picture has gotten a lot of attention since news of it broke a few days ago. As of now, there are thousands of articles about it on Google news*, and it’s being covered by outlets as big as the New York Times, Slate, Daily News, Huffington Post, and Newsweek (where I was quoted). While I don’t agree with removing women from newspaper photos (I’m neither a fan of not showing them at all, but am even more bothered by altering pictures), and while modestly dressed woman are allowed to be seen by men (according to Jewish law) – I am still troubled by how obsessed the world is with the goings-on of one tiny Hasidic newspaper.

Although I strive for a middle-of-the-road type of observance (our sages warn us that someone who is lenient about everything is a heretic while someone who is stringent about everything a “wise fool”), I do my best to understand the viewpoints of those to the right and to the left of me. Not because I necessarily agree with them, but rather because the more we can understand where people are coming from (as long as they are not doing things like massacring people!) the more we can co-exist in a tolerant way.

So let’s try to understand where the idea of not publishing photos of women (which as I understand it is a newish phenomenon in the Haredi world) comes from. My guess is that as the secular world has pushed boundaries of immodesty, the more right wing elements of the Orthodox Jewish world have reacted with a push a more stringent view of modesty.

And think about it: As we sit and attack this paper for cropping women out, I’d like you to take a look at the publications sitting in your home right now. Are we dealing with photoshopped pictures of women here too? And are women’s body parts in these photos being used to sell products? I am no fan of marginalizing women, but I am equally troubled by the exploitation of women.

In fact, the root of the “no women in public photos” concept comes from an extension of an idea that is (in my opinion) one of Judaism’s most beautiful laws protecting women, called shomer einayim (guarding of the eyes). While the mitzvah of modesty appears at first glance to fall solely on the woman, men actually have their own set of responsibilities in the sphere of modesty. That’s because, according to Jewish law, any area of her body that a woman is supposed to cover up from men who are not her husband or close blood relative (upper arms, upper legs and chest), a man is forbidden to see those parts of a woman who is not his wife or close blood relative. What these laws end up leading to is a woman saving her body only for her husband’s eyes because he saves his eyes only for her body.

For all the ladies out there who have husbands with wandering eyes – women who worry how they’ll compare to the next younger, fitter girl who walks by, the mitzvah of shomer einayim gives a wife the security of knowing “he only has eyes for her.”

Now, to be fair, shomer einayim still permits a man to see modestly dressed women, which begs the question: does never showing women in publications somehow hurt them? I can see this issue from both sides: on one hand, I have many female friends who are happily living in the Haredi world who feel respected and cherished. Then again, I am friends with several people who are formerly Haredi who certainly did feel stifled by these extreme measures of modesty.  That’s part of the reason why Jew in the City recently launched Makom – an initiative for former or questioning Haredim who do feel that the stringencies are too much and who are looking for a more open type of observance. At the same time I don’t judge those who are happy with a more closed off lifestyle–and I hope after reading this response, you will also be better able to see where they are coming from.

Sincerely yours,
Allison (aka Jew in the City)
*When you do a Google news search for: “HaMevaser” – the name of the paper.