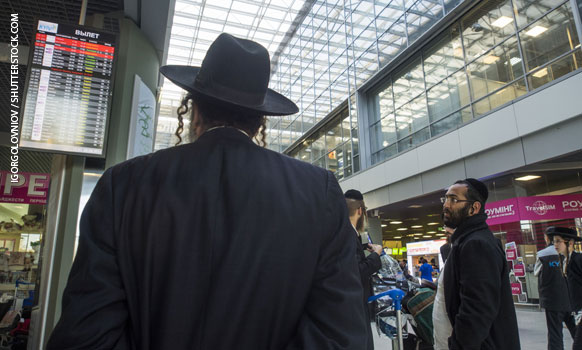 Last Saturday night, after three days of being off-line due to Rosh Hashana and Shabbos, I powered up my iPhone, and the emails started flooding in. Apparently during the holiday a story broke about a pre-Rosh Hashana El Al flight to Israel (LY4) which took off from JFK and was full of Hasidic men who refused to sit in their seats (as the seats were next to women) “causing the plane to be severely delayed.” Ynet published the original article which claimed that there were “hundreds of men” refusing to sit. Many well-read news outlets like the Daily News, the NYPost, Gothamist, and Washington Post picked up the article. One woman was quoted saying the trip was “an 11 hour nightmare.” The Telegraph UK reported that the plane was delayed for “several hours.” (It was the most read article on their site that week.)

I was curious to get to the bottom of the scandal. The entire trip to Israel from JFK is only ten and a half hours, so an eleven hour trip wouldn’t be that delayed. After attempting to reach the reporter of the original article as well as the one person who was quoted in it (only one person with a full name was quoted), I went to social media to find my own sources.

I discovered two surprising things: number one – the original article (according to the source I found) seems to have been greatly exaggerated. Number two – the same flight which took off two days earlier, but was not written about (according to another source I found) was delayed by almost two hours after hundreds of Haredi men refused to sit. I felt better and worse all at the same time!

Daniel Blaukopf of Ran’ana was on the pre-Rosh Hashana LY4 flight that all the papers wrote about. He is a religious (but not Haredi) man. He said that there were many Haredi men on the flight, but he only noticed a few of them asking for a seat change (which went smoothly). Daniel explained that the plane only took off 24 minutes late (you can check the flight records to confirm this fact – something the Telegraph UK failed to do when they published their article. They quietly removed that words “hours delayed” from the headline at a later point). 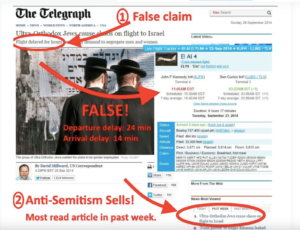 Daniel also explained that there were people in the aisles throughout the flight, but that there are always people milling about on trans-Atlantic flights due to boredom. He noted that the food trolleys were able to make their way back and forth, that passengers could get to the bathrooms, and that while there was one audible dispute on the plane, it was about someone reclining their seat, not about a Haredi man not sitting next to a woman.

I was looking for a second person on that flight, but instead I got connected with a man who was on the same flight (LY4) but which left two days earlier. This man – Yoey Friend of Jerusalem – is also religious but not Haredi. Once I was convinced that the papers were exaggerating and “out to get us,” his story surprised me. On his flight – which he estimated was three quarters Hasidic men (about three hundred) – it took them an hour to get everyone seated. Yoey said that it was so bad the flight attendants were crying, the captain explained over the PA that they were going to risk losing their time slot for take off and that a Haredi woman from Monsey who was sitting next to sit was telling the men to just take their seats. This flight landed over an hour and a half late, with many men in the aisles throughout the trip – some even standing as the plane was making its descent into Ben Gurion!!

We seem to have two problems on our hands: number one – traditional media does not seem to be trustworthy in terms of reporting these stories accurately. And, two, there is an extreme portion of the Haredi community that seems to stress stringent levels of modesty over just about every other mitzvah including having “derech eretz” (common decency), which according to our sages is a necessary precursor to being an observant Jew (“derech eretz kadma l’Torah.”). According to basic Jewish law, a man is allowed to sit next to a woman on a plane. The men in many Hasidic communities, however, are extra strict in this area and avoid coming into close contact with women who are not their wives in order to avoid accidentally touching or getting too friendly with them.

I have been politely asked to move my seat before by Haredi men, but have not felt offended as I understand the reasoning. I have heard from many non-Orthodox Jews, though, that they do feel offended or put out when asked to switch and therefore I’m not so sure if asking for a seat switch is the right thing to do since offending someone is prohibited under Jewish law. I was curious to hear a Haredi perspective on this problem, so I had a chat with Rabbi Avi Shafran, the director of public affairs for Agudath Israel of America (the ultra-Orthodox umbrella organization in America) who told me his personal thoughts on the matter:

“The principle that should govern all plane-seating situations is the same one that we are to employ in all human interactions, namely, menschlichkeit [i.e. being kind and considerate] not causing people discomfort or harm. There’s nothing wrong with politely asking a fellow passenger traveling alone if he or she minds switching seats.  When my wife and I were seated in different rows on a flight to Israel earlier this year, that is what we did, and the two people we asked were happy to accommodate us, allowing us to sit together for the flight.  Had we not found people willing to switch, we would have taken our seats as assigned.  No Torah-observant Jew has a right to inconvenience another person, nor to flout airline rules about standing in aisles at certain times. Ideally, passengers who are not happy with their seats, for whatever reason, should ask a steward or stewardess for help.  If some accommodation can be found, fine.  If not, then one is required to sit where assigned (or leave the plane, always an option for someone who decides as a matter of principle to refuse a seating assignment).  If someone truly wishes to control who he is seated next to, he or she can purchase two tickets and leave the seat empty.”

Some people are calling for El Al to create a section of the plane reserved for any men or women who do not want to sit with the opposite sex. Other people have said that such segregation would be unconstitutional. Perhaps the answer is for Hasidic men to only travel in groups and block out men-only rows. We at Jew in the City will continue to stay on this situation – both making sure the media is reporting accurately and looking to find ways to work with the Hasidic community so that they can uphold their standards while decreasing the chance for chillulei Hashem (a desecration of God’s name due to misconduct of observant Jews).

Who Will Live And Who Will Die? A Troubling High Holiday Prayer

An Act of Kindness & Destiny Brought These Strangers Together