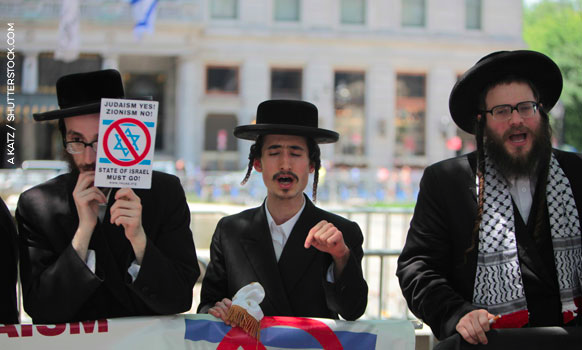 I have a few Orthodox friends who are very pro-Israel, but I have also read that some forms of Orthodoxy are vehemently anti-Zionist. I’ve heard of other sects who completely separate the concepts of Zionism and Judaism as two essentially separate belief systems. I have no idea if any of my information came from reliable sources and was wondering if you could clear this up for me. Is there any common ground about Israel in the Orthodox community? What is the role (if any) of Zionism in an Orthodox interpretation of the Torah? Is Zionism simply a matter of individual beliefs and opinions?

Thank you for your question. Before I can answer why people are pro or con we need to define what Zionism in. In its most basic form (and it is a very complex topic) I would say that Zionism is the idea that Jews can self-determine in the land of Israel before moshiach (the Messiah) arrives.

The Talmud, based on several Bible verses, discusses what’s called the “shalosh shevuos” (three oaths). The part that’s relevant to our discussion is that one of these says that we agree not to try and take back the land of Israel, in exchange for which the nations of the world will not oppress us unduly harshly. Based on this, the position of some Chasidic sects is that there should be no Jewish state until moshiach comes. (It must be noted, however, that these sects have large presences in Israel, which they recognize as the Holy Land. They have no objection to Jews living in Israel, they just think that there should not be Jewish rule until the Messianic era.)

The overwhelming majority of Orthodox Jews feel otherwise. (I don’t have exact figures but, anecdotally, the turn-out for the annual Salute to Israel parade is hundreds of thousands and the Jewish counter-protest – the most extreme of the anti-Zionist group – is something like a dozen.) Why are so many Orthodox Jews Zionists? First of all, the “oath” only prohibits us from seizing the land by force. We didn’t seize it; it was given to us by UN declaration. Nothing in the “oath” prevents us from accepting the land as a gift, or from using force to defend it once we have it.

Secondly, the nations of the world did not honor their end of the bargain, i.e., not to oppress us too harshly. (The Holocaust ended just a few years before the State of Israel was established. Even before then, the Inquistion and the pogroms were certainly unnecessarily harsh!)

Among “Zionist” Jews, there are different positions. Since you asked about the Orthodox, we’re probably talking about religious Zionism, which sees the restoration of the Jewish homeland as the first step in the redemption process. The Bible promises that the arid deserts would bloom (see, for example, Isaiah chapter 35), which is exactly what happened when the Jews returned to Israel after World War II. But there’s also political Zionism, cultural  Zionism, and more.

So one relatively small faction of Orthodox Jews are anti-Zionist and they do have a religious rationale for their belief. Mainstream Orthodox Judaism, however, is definitely Zionist in one way or another, though they may disagree in the details and in their politics. To assume that all Orthodox Jews are in lockstep beyond that point is like assuming that all Americans who believe in democracy necessarily agree on healthcare, immigration and the economy.

I hope this answers your question.

Why Israel Searched For The Boys Even Tho' They Heard Gunshots