Is Life A Line or a Circle? Reflections on Simchas Torah 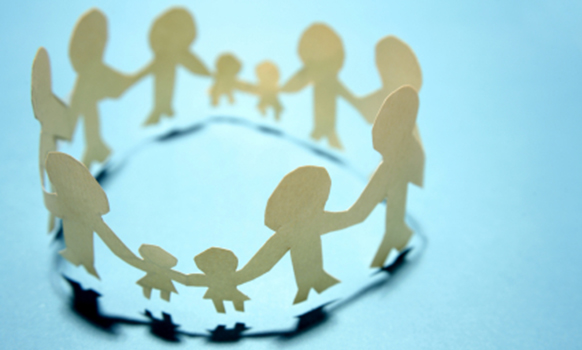 This week I let my eldest child (my super responsible ten year old daughter) use a sharp knife for the first time. A couple days later, I let her take something out of a hot oven. But the real craziness began a week ago when I let my daughter walk to a playground – which included crossing the street for the first time – without an adult. (!!!!!!)

Letting go, little by little, is terrifying for a worry wort of a woman like me. But it’s not just the worrying. It’s the realization that all these steps towards adulthood are the beginning of the end of childhood. And then there’s my baby – my almost three year old son who is the epitome of babyhood. The only thumbsucker of my bunch who upon seeing me at the end of the school day used to scream “Mommy,” jump into my arms, and start sucking his thumb. The kid who – unlike his siblings – when you ask him if he’s a baby or a big boy always proudly tells you “Baby!” This baby is growing up too. His slender frame just got a bit heftier a few days ago, he’s at the cusp of potty training (OK, that one’s not happening fast enough!), and switching to a big boy bed. My baby boy is almost not a baby. (Sigh.)

I was thinking about all these “ends” the other night at shul on Simchas Torah. How over- whelming they feel. How quickly they seem to be coming. How I have no ability to stop them from happening. As I was “mourning” the ends, something occurred to me. Why here, on this very holiday, we were marking an end – an end to reading the Torah (as we were finishing it for the year). But no one was walking around mopey and dour like I felt. On the contrary, everyone was rejoicing. Because on Simchas Torah, the end is not really the end – it is only the beginning. As soon as we finish the last words of the last book of the Torah, we immediately start it all over again.

And then I got to thinking: is life a line or a circle? A line or a circle, I wondered. Reason and logic tell us it’s a line. After all, all we can see is a line: beginning, middle, and end. And doesn’t that make the end of the line so tragic? So final? So mournful? But then I looked up and saw the hakafos – the dancing that is done in circles on Simchas Torah as we celebrate end becoming beginning. I thought of the round challahs we had been eating all month – the custom of the Jewish New Year – to symbolize the circle of life. And I realized that we do not believe that life is a line. No, according to Jewish wisdom, life is a circle. Which means I must not despair when one stage of life ends. Because somehow, beyond what my logic can prove, the end will not be final.

A very special rabbinic family that I’m close with suffered for years and years as the wife and mother – an exceptional rebbetzin – was sick. After holding on longer than anyone believed she could, she finally gave out. Then, moments later, her daughter (my friend) went into labor and gave birth to a baby girl. It was an incredibly challenging time: tears mixed with joy, end mixed with beginning, mourning mixed with hope. One of the deceased rebbetzin’s relatives – also a rebbetzin – gave a Torah class in the merit of her relative’s passing, and the lesson was repeated by my friend – the mourner and mother – when I came to see her sit shiva:

“Two souls – my mother’s and my daughter’s – switched places earlier this week. They touched along the way…” my friend began.”My daughter’s soul had been waiting to be born, and as this pure neshama left the World of Truth, the angels cried and mourned the loss, but here on earth, when our beautiful baby girl arrived, everyone screamed ‘Mazel tov!’ and rejoiced.”

My friend continued, “My mother (aleha hashalom – may peace be upon her) held on for so long, but when she finally left this world, we all cried and mourned at the tremendous loss, but in the World to Come, in the World of Truth, they looked at all she had accomplished in our world, and upon arriving, they screamed ‘Mazel tov!’ and rejoiced.”

Why The Torah Commands Us To Judge Favorably