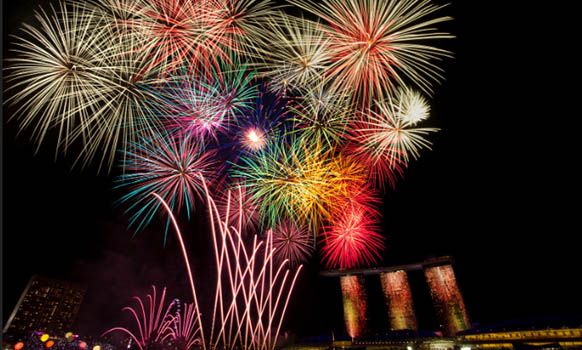 Although I, admittedly, find myself bopping to the beat if one of her songs comes on the radio, the lyrics in much of what Katy Perry sings are quite…unkosher. But there is one of Katy’s songs that most people would agree has a positive, inspiring message: “Firework.”

Do you ever feel like a plastic bag
Drifting through the wind, wanting to start again?
Do you ever feel, feel so paper thin
Like a house of cards, one blow from caving in?

Do you ever feel already buried deep six feet under?
Scream but no one seems to hear a thing
Do you know that there’s still a chance for you
‘Cause there’s a spark in you?

‘Cause, baby, you’re a firework
Come on, show ’em what you’re worth
Make ’em go “Oh, oh, oh”
As you shoot across the sky-y-y

Boom, boom, boom
Even brighter than the moon, moon, moon

While I would also agree that there is an overall positive message in this song, and it is certainly better than the drunken debauchery that Perry sings about at other times, I am drawn to the similarities and differences between “Firework” and “This Little Light of Mine,” which is nearly a hundred years older and was written as a children’s gospel song. “This little light of mine, I’m gonna let it shine” is essentially all the second song is comprised of. Both pieces beautifully describe the spark or light within every human being which a very Jewish idea. But then the songs diverge. With the older, religiously themed song, the goal is to shine your personal light onto the world. The light I envision in “This Little Light of Mine” is a candle, with a pure, modest glow. Even though a candle’s flame is meager, when brought into darkness, a little light can cause great illumination.

Compare that image to Perry’s song where the idea is to “own the night,” “show them what you’re worth,” and go “boom, boom, boom.” The drastic difference in how to use your God given light makes me wonder where our society has come in these last hundred years. Our culture is obsessed with attention. Reality TV shows. Viral internet videos. Fame. Tabloids. Paparazzi. When you think about how loud and in your face fireworks are: they dominate the sky, you hear them even if you’re not in the mood to hear them. It troubles me to think that the “fireworks” model of light has become the new model when our society thinks of greatness.

As a public figure whose mission is to rebrand Orthodox Jews and Judaism to the world, I do get noticed and, unfortunately, it makes the good that I’m trying to accomplish a little less worthwhile because the ego likes honor. That’s not to say that it’s the honor that motivates me – on the contrary, it’s the mission that I believe in with my heart and soul. But the very essence of the mission requires publicity, and I am aware that any act which brings public acclaim diminishes the greatness of the act to some extent.

On the other hand, there’s a woman I know who for years cared for her sick father, and now in the wake of his death, devotes a tremendous amount of time and energy in caring for her mother and her younger siblings, and no one is writing her up in newspapers and no one is seeing her face on a screen, and not too many people are thanking her for her devotion. Because of her commitment to her own family and to her mother and siblings she doesn’t have much time for anything else. She’s always telling me how great she thinks I am, but when I look at what she does in her modest, thankless way, I see true greatness.

In reality, those quiet acts of kindness, the ones that never get publicized, the ones that don’t get recognized, the ones that don’t leave the doer with any glory – those acts are precious in a way that attention getting acts can never be. That’s not to say there’s not a time and a place for actions that get noticed, but Judaism believes that God is hidden and in our attempt to emulate the Almighty, we should try to live in a way that doesn’t scream for attention either. As our sages so wisely say “if one seeks his own honor, his honor runs away from him,” (Pirkei Avos). So be the firework if and when life requires you to be, but try more often to be the candle and let your little, but powerful light shine.