Women of the Wall: A Possible Solution To Endless Fighting 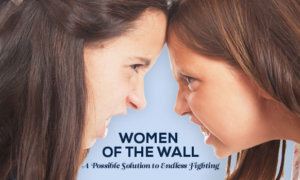 Two children, a brother and sister, are fighting: calling each other names, bringing each other to tears. Their father stays out of it at first. He’s hoping his kids will work things out on their own, but they don’t. The bickering escalates until the father finally throws them into a time-out. He wants his children to think about what they’ve done. He wants them to find a way to get along as they suffer through the punishment together.

The siblings are miserable as they watch the other kids playing outside on such a bright, beautiful day. Their room is sweltering, and they’re getting hungry. But they continue to fight and occasionally call out to their father, begging him to let them go. Finally, the father notices that the room is quiet, so he goes upstairs to check in, hoping that his children finally figured out how to get past their differences. But just as he opens the door, the son and daughter start fighting all over again, this time over a toy. Who had it first, how it should be used, whose fault it is that they’re fighting again. The father is crushed as he realizes that his children have learned absolutely nothing. All that time and pain and they learned absolutely nothing.

THIS sums up Jewish history for the last two millennia leading up to the current controversy over the Women of the Wall. Two thousand years ago, our people were put into a “time-out” for bad behavior. We were thrown out of the land of Israel, our Temple destroyed. We were scattered to every corner of the earth as we sat out our punishment. What was our crime? Baseless hatred towards our fellow Jew, our “brother.” For two thousand years, through expulsions, pogroms, Inquisitions, the Holocaust, Soviet Russia, our people cried out to the Almighty for a chance to come home.

And then something miraculous happened: forty-six years ago last week (on Yom Yerushalayim) our prayers were answered. On June 5, 1967, the Jewish people gained back sovereignty over Jerusalem for the first time in two thousand years and were suddenly free to stand and pray and weep only steps from the Holy of Holies. Our people could finally return to the site of the chorban (the destruction of the Holy Temple) that landed us into our long and bitter exile. And Jews from all over the planet ingathered in what seemed like age old prophecies being fulfilled. It wasn’t geula (the redemption), but it certainly felt like a beginning of a redemption. Our Father had “opened the door.” He wanted to see if we had learned our lesson. Would we finally treat one another with proper respect?

If there’s ANY place in the world that should remind us of how we ought to behave towards one another, the Western Wall should be THE place. Gazing upon the destruction should immediately remind us of why we’re still in galus (exile). Yet the site of the destruction is where we’ve seen some of the nastiest displays of baseless hatred in quite some time. What took place last week, the DAY after Yom Yerushalayim, at the Western wall was inexcusable and the whole world sat back and watched Jew fighting Jew.

I’d like to speak to people on both sides, to try to find a common ground, because God knows we need to find it. I will start by saying that I believe that on both sides there are sincere people and on both sides there are people acting for the wrong reasons, so I’ll speak only about the sincere. To the traditionalists – to the ones who can’t imagine any prayer happening at the Western Wall that in any way deviates from Jewish law or tradition – I will say this: I believe that what motivates the sincere among the Women of the Wall is the pursuit of kavod habriyos – making sure that every human being is treated with dignity and respect. Now of course those in favor of traditional prayer don’t believe that their method of praying is undignified to women. This group believes that men and women simply have different spiritual needs. So the two sides can agree to disagree on how to carry out the value of kavod habriyos, but the traditionalists should appreciate that their opponents are clinging to a value which they respect.

To the progressives who want a more liberal, egalitarian type of prayer, I will say this about the sincere ones fighting to only allow traditional prayer: for all the anti-Semites over the last three thousand years who have tried to destroy us, whether it was Pharaoh making us work on Shabbos, King Antiochus outlawing bris milah, or the KGB making Jewish observance punishable by death, for all our enemies who wanted to rip our Torah away from us and for all our ancestors who were willing to give up their lives in order to hold on to it, the traditionalists believe that this is part of that same fight. Of course the progressives don’t agree – these changes only enhance Judaism, they don’t destroy it – so they’ll have to agree to disagree as to what constitutes the Torah being uprooted, but the progressives should be able to appreciate the value that the sincere traditionalists are clinging to of not losing our Torah after we’ve fought for so long to hold on to it.

Even if we can appreciate the other side’s motivations a bit more, there’s still the practical matter of how that wall will be used. I am fearful that no solution will ever make everyone happy. The Women of the Wall (and their many supporters in the Diaspora) have protested for twenty-five years as the traditionalists held their ground, but now that the law has changed and the Women of the Wall will be able to pray as they want to, I believe the other side will now be the ones protesting and not letting go.

And so I’d like to suggest a solution that everyone will hate, because at least everyone can all being unified in their hatred of my suggestion. I believe that the answer can be found with that brother and sister who are fighting over the toy. If two kids fought over the same toy, wouldn’t the best response be to take the toy away to salvage the relationship?

The Kotel has become a battle ground, it is bringing out the worst in us. It is no longer a protective wall that surrounds the Temple, it now feels more like a BARRIER that will prevent us from rebuilding the Temple. There is no special commandment to pray “at” the wall. But there is a commandment to pursue peace and love your neighbor as yourself. Perhaps we were given the wall back as a test, to see if we’d tear each other down for a piece of it, or find a way to get along.

There is a debate as to whether there is kedusha in those stones, but everyone agrees that there is kedusha in every Jew, yet we are TRAMPLING one another to claim a piece of that wall. What if we cared more about being kind than being right? What if we all just agreed to back off from the wall and only use it for personal prayer? What if we agreed that it’s not worth the fighting and the anger? What if every time we saw those stones we felt a loss and were reminded that we’ll remain in a state of destruction until we love one another more than we hate opinions that differ from ours?