In Pursuit of Perfection: A Humbling Experience 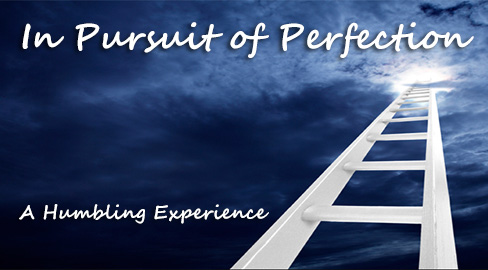 When I was fourteen I decided that I was going to become perfect. Yeah, I hear how it sounds now, but at the time, it seemed like a brilliant idea. See, one of my sisters’ greatest pleasure during childhood was to constantly tell me everything I was doing wrong. (In adulthood, it’s only her second or third greatest pleasure.)
I usually tried to defend myself, but one day I realized that she had a point. There were a lot of things about me that needed changing, so I decided to just do it, right then and there. Stop all my bad habits, incorporate the positive character traits I was lacking, and in a matter of no time, there’d be nothing left for her to complain about.

Unfortunately, after a few days of attempted perfection, I saw that nothing about me had actually changed. I was still chewing my breakfast cereal like a cow and hadn’t been able to stop myself from balling up her clothes and throwing them on the floor after I’d worn them. And I’m sorry to say that I was still leaving my daily glob of toothpaste in the bathroom sink.

Trying to become perfect, it seemed, was a lot easier in theory than in practice. So instead of trying to become perfect all in one fell swoop, I committed to working everyday to get just a little bit better. Some days I’d have great success, other days there’d be huge failures, and probably many days there’d be very little movement at all. But at least I’d be on a path, headed in the right direction, making my way towards the goal as quickly as I could.

And I told myself that if I was ever feeling down about how much I had accomplished, I would just look back at all the obstacles I’d already overcome to be reminded what I was capable of. But if those achievements ever caused me to feel arrogant, I would simply look forward so I’d remember how much there still was to achieve.

Years later, after I became observant, I found out that one of the famous yeshivas in pre-World War II Europe encouraged a very similar practice among their students. In order to achieve the appropriate balance between humility and confidence the students were instructed to keep a Torah phrase in each of their pockets.

Achieving humility is a very important goal in Judaism, but it can’t come at the expense of a healthy sense of self. It’s a hard balance to achieve, but don’t fret, practice makes perfect.

This was orginally posted on jwrp.org

Chesed From A Chasid: A Lesson in Kindness From Satmar Chasidim