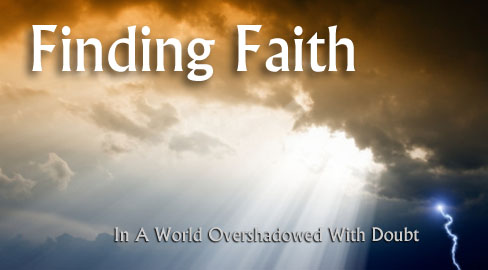 Faith in God, like loving one’s spouse – is not a static thing. It ebbs. It flows. It’s a marathon, not a sprint. And it requires work and commitment to make it last. God’s presence in the world is hidden – it’s meant to be hidden, in part, so that we have free will. As the great Aryeh Kaplan explained, if you could see a cop in your rear view mirror every single time you got into your car, you’d never be able to speed. Technically – you could speed, but you never would. Because you’d always know you were being watched. And so God removes Himself so that we are left with doubt and our choices are based on conviction rather than fear of consequences.

So how does one work on faith? Learning about Jewish history – how our people have been irrationally hated yet have irrationally survived is one way. Looking for Divine providence in your life and remembering the stories of others’ Divine providence – like the way that Mayim Bialik and I got connected – is another. An additional way is being aware of how mitzvos can deeply touch a Jewish neshama.

Working in the field of Jewish outreach opens me up to many tough questions. For nearly every point I make on the side of faith, there’s a counterargument that comes in from a non-believer or cynic. Some points are easier to address, others more difficult. On the other hand, working in Jewish outreach gives me the opportunity to see some amazing things that strengthen my emunah and fill me with inspiration that I might never experience otherwise – like seeing the power of mitzvos in action again and again. Here are two recent anecdotes along those lines that I wanted to share with you:

The first story is about a woman who randomly commented on a post not too long ago. She mentioned that she highly respects Orthodox Jews despite the fact that she does not have enough faith to be one herself. She then asked me a question about dating.

Her statement struck me as odd, so I reached out to her and asked if we could speak on the phone instead of corresponding via email. Something told me that there was more to this story. She was happy to take me up on the offer, and when we spoke I asked her how she had gotten to respect Orthodox Jews. She explained that she had been in touch with an outreach rabbi whose family she had visited for Shabbos a few times.

I asked her why she was so sure that she didn’t have enough faith to be an observant Jew. She explained that she wasn’t 100% sure that the Torah is from God. I explained to her that even the most religious of us have our highs and lows and can never be 100% certain about our faith. I went on to explain that faith is something that can be worked on through Torah learning and mitzvah observance, among other things.

And then I asked her a question: “Did you ever feel anything, when you spent Shabbos with that religious Jewish family?” I frankly wasn’t sure what this “ye woman of little faith” would say, but surprisingly she responded, “very much so.” So what was the problem, I wondered? She didn’t think that feeling she got on Shabbos counted, because when she left their house, it always went away.

“Aha!” I exclaimed. “Mitzvos are supposed to bring us closer to God, which we would mean that we should expect to feel more connected while performing the mitzvah itself, and less connected afterwards.” (Of course, I noted that performance of mitzvos don’t guarantee that “high” feeling every time – free will would be compromised if that were the case.)

And then I made a suggestion to her. I asked if she’d consider learning Torah in a serious fashion and trying out an observant lifestyle for some time to see what it did to her faith. “Again – no guarantees,” I explained, “but the idea is that when we learn God’s Torah and perform His commandments, we should be *more* tapped into that feeling of connectedness.” Would she be open to seeing what Torah learning and living would do to her emunah?

She thought about my suggestion for a bit and decided that the feelings that she had had while observing Shabbos were compelling enough to look into this lifestyle further. She is now getting the pieces in place so that she can spend a year in Israel next year learning Torah…

The second story is about a man from a very secular background who never had any Jewish education. His wife has been more religious than him for a while now. She’s been interested in him getting more involved for a while now. He’s been dragging his feet – you guessed it – for a while now. But then something changed and he decided that he would give Torah learning a try. I attempted to help him set something up, but in the end his schedule got in the way, and he explained that he wouldn’t have time to commit to learning for several more months.

“I’ll let you off the hook on one condition,” I said jokingly. “You need to commit to saying the “shema” every night before bed.” I wasn’t even sure he knew what it was, but he had in fact heard of it. I explained that this is something that observant Jews end their days with. And that when we say the “shema” we focus on the idea that Hashem (the side of God that is merciful) and Elokim (the side of God that judges us) are one in the same, or in other words, the good and the bad in our life are ultimately all good and come from the same Source.

This guy had been dealing with some difficulties in life which were causing him to worry and I told him, just say this verse and focus on this idea – just see how it goes. To tell you the truth, though, I had no idea if he would actually commit to this. I like to make suggestions to people all the time (I’m never short on opinions!) but I never know if they’ll actually follow through with them.

And then a couple weeks later, as I was driving to meet my husband for dinner, my iPhone made that little sound it makes when a new message comes in, andonce I safely came to a stop, I looked down and saw this guy had written me a message which said: “thanks again for your help and the gift of the shema.”

My eyes filled with tears as I read his words.  It’s not my gift, I thought. It’s Hashem’s gift to the Jewish people. I’m just fortunate enough to sometimes get the opportunity to connect Jews to what is rightfully theirs. As I found out later from him, he had been saying the shema every night, and it was moving him so much that he now wanted more. “If the Shema was my first step, what would you recommend as the second one?” he wanted to know.

Time and time again, I’ve seen this happen – as our holy sages say in Pirkei Avos, “mitzvah goreres mitzvah” (one mitzvah leads to another). “If you’re ending your day with shema,” I explained, “a great next step would be to add the one line “modeh ani” prayer which we say when we open our eyes in the morning to thank Hashem for a new day. To take note that being granted a fresh start is an opportunity to right the wrongs from the previous day, to live a life full of meaning.”

He has since reported back to me that shema and modeh ani are “extremely necessary and important book ends for [my] day.” We are now in the process of getting him a pair of tefillin.

Are these stories definite proofs of God’s existence or of the Torah’s Divinity? Of course not. As I said, we live in a world where God’s face is hidden. Where doubt constantly casts shadows on faith. But both of these events stirred something in me – in that place that is moved when I detect something Godly. In that place deep inside that I assume is the thing that we mean when we say “soul.” And since I believe that inspiration should always be shared, I wanted to pass these stories on to you. If they’ve inspired you, then please share them as well.