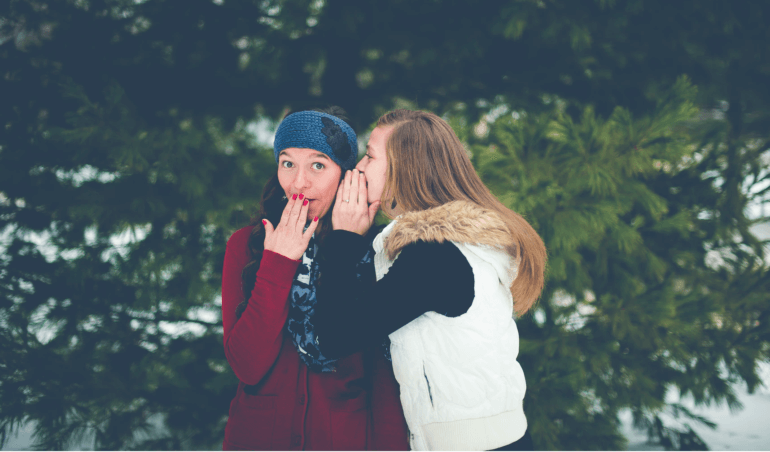 Everybody talks about lashon hara, but no one ever discusses a certain aspect of it, namely being overly positive about a person. I was a victim of that. At my job, we had to take on more responsibilities and a coworker was way too positive about how well I did a certain menial task, with the result that the company changed my position to a lower-status job. I’m upset that all my hard work in getting degrees was rendered worthless because someone decided to be overly positive about me.

Thanks for your question, and I’m sorry to hear that your colleague’s attempt at praise backfired on you. But you raise a good point: overly praising someone is indeed a form of lashon hara. First, a recap as to what lashon hara is. Lashon hara – literally “evil speech” – generally comes in the form of gossip. This is speech that is derogatory (even if it’s not harmful) or that’s harmful (even if it’s not derogatory). Here’s an example of each:

The usual defenses of lashon hara, such as “it’s only a joke” and “but it’s true,” don’t actually mitigate things. In fact, lashon hara is by definition true! If it’s false, it’s called motzi shem ra (literally “spreading a bad name,” i.e., slander), and it’s even worse. Now there’s a thing called “avak lashon hara” – i.e., “trace” lashon hara – and it’s more situational than the real thing. An example of avak lashon hara is saying, “Don’t mention Joe to me – I don’t want to talk about what I heard about him!” You didn’t say anything derogatory about Joe but you certainly implied that something unseemly is going on!

Vague statements can also be avak lashon hara. For example, if I say “Mrs. Jones cooks ‘round the clock,” my intention might be that the Joneses are always ready for guests, but listeners might take that to mean that the Joneses are gluttons, always eating. Overly praising someone is also a form of avak lashon hara. Let’s examine. Mishlei (Proverbs) 27:14 tells us, “If one blesses his neighbor in a loud voice early every morning, it will be considered a curse to him.” Why should a neighbor’s praise be considered a curse? Rashi cites the Talmud in Erchin (16a) that if I praise my neighbor’s generosity, others who hear of it will come and take advantage of his generous nature. And that’s just one way in which praise can be detrimental.

On the same page of the Talmud (Erchin 16a), Rav Dimi says that one should never sing his fellow’s praises because doing so leads to criticism. This can happen in one of several ways:

1. If you praise someone in front of a rival or an enemy of that person, you’re practically begging the antagonist to criticize the subject of your praises;

2. Even not in front of an antagonist, human nature is to respond to excessive praises with, “Yeah, but….”

3. Forget about the listeners – even the speaker of excessive praises might say something negative in an attempt to make his comments seem more “balanced!”

In the case of an enemy, not only shouldn’t you praise his rival, you should try not to mention that person at all because of the likelihood that doing so will spark some lashon hara.

Another scenario: a man gets a job at a prestigious law firm. He tells his sister but he wants to keep it quiet so he cautions her not to tell anyone else. However, she’s so proud of her brother that she blabs to a few of her friends. It’s pure praise, there’s no negative consequence, and it doesn’t generate any criticism. Nevertheless, it’s still lashon hara because she revealed his secret.

So there’s a lot more to lashon hara than just “is it harmful?” and “is it derogatory?” When speaking of others, we have to consider being misunderstood, tempting others to speak badly of them, revealing privileged information and other unintended consequences, such as the one you experienced.

Speaking of God, Psalms 65:2 says, “To You, silence is praise.” Rashi explains that the more we try to praise Him, the less we actually say. While the referent there is God, I think the same can be said of us as well. When speaking of others, even for the good, always weigh your words because more is often less.