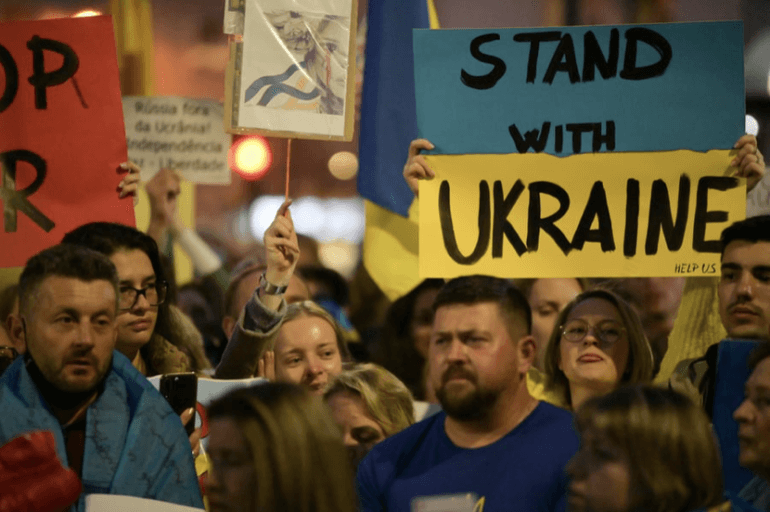 Does Jewish Law Believe That Countries Should Stop Putin?

Does the mitzvah of lo saamod al dam rei’echa mean we believe countries should stop Putin?

Thanks for your question. I think the first thing we need to do is define terms. “Lo saamod al dam rei’echa” means “You shall not stand idly by your fellow’s blood” (Leviticus 19:16). In other words, if we see someone in mortal peril, we have an obligation to try to save them. So, since people in Ukraine are in danger due to the Russian invasion, you’re asking if this means we think the nations should band together to stop Russia. Short answer, no.

First off, this mitzvah is incumbent upon individuals. If I see someone in imminent danger, I am obligated to attempt to save him. Warfare in the Torah is not the purview of the individual, but rather of the king. So, if this mitzvah did apply to going to war, that would mean that I, as an individual, should join the army or, barring that, perhaps become a mercenary. Such is not the case.

Next, as we previously discussed, the obligation to save others only applies up to a certain degree of risk. If someone is drowning and you can swim, you should try to save him. But if the current is such that you will likely be swept up and also drown, then you should not. There are two types of war and neither of them fit this rule. In a milchemes mitzvah (an obligatory war, such as a defensive war), everyone must fight, despite the degree of personal risk (see Sotah 44b and Minchas Chinuch 425). In a milchemes r’shus, those who were feeling cowardly were sent home so as not to dishearten their comrades (Deuteronomy 20:8, Sotah 44a). In neither type of warfare is the evaluation of risk used in lo saamod relevant.

Another difference: lo saamod applies to imminent danger, not to potential future danger. If I see a safe about to fall on your head, I have to push you out of the way. If I see you drinking or smoking, I don’t slap the bottle or the cigarette out of your hand in a misguided attempt to save you from cirrhosis or lung cancer. I say, “Hey, man. You shouldn’t smoke; it’s no good for you” or “Don’t drink to excess!” Similarly, if I see a civilian about to be shot by a soldier, I might yell “Duck!” but that doesn’t mean I should fly to a foreign country to look for people who might or might not be in imminent danger.

Also, with the exception of the seven universal (“Noachide”) laws, mitzvos only apply to Jews. Even if I felt that lo saamod meant mobilizing the troops, that would only (arguably) apply to Israel. There’s no reason it would – or should – have any effect on what the US, Canada, Great Britain, France or any other country does.

Finally, I just think that’s a terrible idea. Granted, I’m not the Secretary of State or a five-star general, and I assume neither are you, but I can envision how sending in the troops could drive Putin to nukes and trigger World War III. I’m not saying we should never send our armed forces to Ukraine, just that I would rather have that decision made by people with actual military intelligence than by theologians. My faith should not be the basis for our country’s foreign policy – even if I thought the mitzvah meant what you suggested.

Now, just because this mitzvah doesn’t apply to this situation, that doesn’t mean that we don’t care about the citizens of Ukraine or that we should do nothing for them. We still have a moral obligation to protect the innocent and I think this qualifies. So, short of stocking up on ammo and offering our services in Soldier of Fortune magazine, what can we do? Here are three suggestions:

Donate. There are plenty of organizations raising funds to help the people of Ukraine in a variety of ways. Their reach exceeds yours or mine, so it’s undoubtedly a mitzvah to support their efforts.

Daven. In recent years, people have taken to mocking the idea of “thoughts and prayers.” And certainly, “thoughts and prayers” should not take the place of action on our parts. But we do believe prayer to be efficacious, so we should not hesitate to daven for the safety of the civilian population, as well as the armed forces, and for a speedy resolution to the conflict.

Speak up. Even if it is not a religious obligation, your moral compass might tell you that we should be sending in the troops. Or perhaps another person reading this feels the exact opposite. Whatever one’s conscience tells him is the proper response to the current crisis, we are encouraged to reach out to our representatives and share those feelings, and to express our satisfaction or dissatisfaction with our leaders’ decisions at the polls.

May God bring a speedy end to the conflict without further escalation and casualties.

Meet A Real Leviev: The Polar Opposite Of The Tinder Swindler