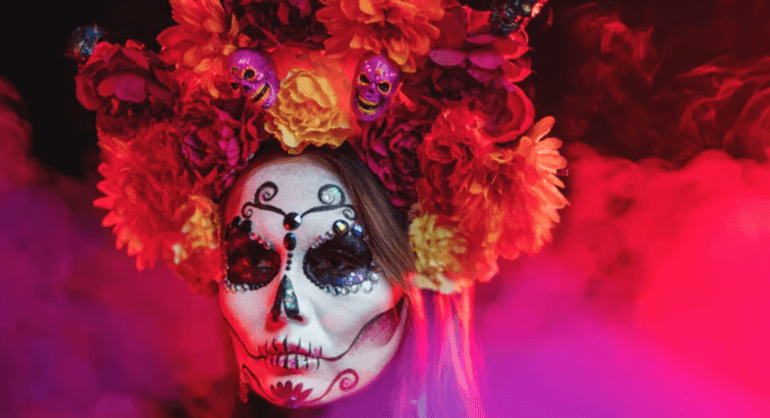 Is There a Jewish Equivalent of Dia de los Muertos (Day of the Dead)?

Is there a Jewish equivalent of the Dia de los Muertos (Day of the Dead)? Can we celebrate or acknowledge those who have died together outside of their individual yahrtzeits or yizkor?

Thanks for your question. No, we don’t have a day like Dia de los Muertos but what’s wrong with yahrtzeits and yizkor? Your question reminds me of this exchange from The Simpsons:

Bart: I just think our veterans deserve a little recognition.

Lisa: That’s what Veterans Day is for, Bart.

Bart: But is that really enough to honor our brave soldiers?

Lisa: They also have Memorial Day!

Lisa: They have two!

So even though you specifically want to exclude yizkor and yahrtzeits, that’s what I’m going to talk about because that’s what we have.

The way we honor the dead is by performing mitzvos in their merit, which elevates the soul in the afterlife. For example, when you go to a shiva house, you might notice a table with two things: (1) plates and pushkas collecting charity for various worthy causes and (2) a sign-up sheet where visitors can commit to learn a tractate of Mishna. Each of these mitzvos – tzedaka and Torah study – is intended as a merit for the deceased. This is also true of yahrtzeits and yizkor.

A yahrtzeit – from the Yiddish words “yahr” meaning year and “tzeit” meaning time – is the anniversary of a person’s passing, observed according to the Hebrew calendar. (For example, if a person died on March 3, which was 11 Adar, his yahrtzeit would be 11 Adar even if that Hebrew date happens to fall on March 16 or February 28.) Traditionally, a “yahrtzeit candle” (a 24-hour candle in a jar) is lit for immediate relatives, particularly for one’s parents, though this is not required by Jewish law.

Men who are observing a yahrtzeit recite kaddish for the deceased. (In some congregations, women might also recite kaddish. This is not the place for that discussion.) Kaddish is not a “prayer for the dead” as is commonly believed. Rather, it’s a tremendous praise of God. Being the catalyst causing the congregation to praise God in this way is a tremendous merit for the deceased. If a man reciting kaddish has the ability, he might also lead the prayer service, though there’s a popular saying that losing a relative makes one a mourner, it doesn’t make one a chazan (cantor), so this is not an inalienable right. Depending on the day of the week, one might also receive an aliyah. If the yahrtzeit falls on a day on which the Torah isn’t read, he might receive an aliyah the preceding Shabbos.

The day of the yahrtzeit, there’s a custom to lay out some food and drink for the congregation and/or at one’s place of work. This is called a tikkun and it’s a merit for the deceased in that it leads participants to recite the appropriate brachos over the things that they eat. Similarly, many sponsor a kiddush in shul the week of one’s yahrtzeit.

While no longer observed as widely as it once was, there is a custom for one to fast on the yahrtzeit of one’s parents. This serves as a form of teshuvah (repentance).

The theme of Yizkor is that we ask God to remember our relatives and to include them in the “bond of life” in paradise alongside the Patriarchs, Matriarchs and other departed righteous. In exchange for this, we commit (without making a vow) to donate charity on their behalf. The primary focus of Yizkor is on one’s parents, but it may also be recited on behalf of other relatives.

Yizkor is based on Deuteronomy 21:8, “Atone for Your people, Israel, whom You have redeemed.” The Midrash Tanchuma (parshas Ha’azinu 1) tells us that the first part of the verse refers to the living of Israel, while the second part refers the deceased. The Midrash continues, “Therefore, our practice is to remember the deceased on Yom Kippur by pledging charity on their behalf.” We are then told not to think that charity no longer helps the departed. Rather, when one pledges charity on the deceased’s behalf, he ascends as quickly as an arrow shot from a bow.

Yizkor was extended from Yom Kippur alone to the three Festivals, because Deuteronomy 16:16-17 teaches us that charity is an integral part of the Festivals, which makes them a fitting occasion for yizkor with its emphasis on charity as a merit for the departed.

There’s a familiar practice for those not reciting Yizkor to leave the room while the mourners are saying it. Some will tell you that it is a sign of respect for one’s living parents not to remain inside while Yizkor is being recited for the deceased. Others will say that it is from fear of the ayin hara (“evil eye”) and that those with living parents go out so as not to tempt fate. Opponents of the practice say that going out is based on superstition and not recommended, or perhaps it’s just insensitive to those reciting it. Plus, there are prayers at the end that are recited for victims of the Holocaust and other martyrs; these apply to all members of the congregation, not just to those who have lost close family members. Some would advise staying inside in order to recite those prayers, or to go out and return for them. (One should follow one’s own family minhag or the practice of one’s community.)

Many people who are not regular synagogue attendees will appear on days when yizkor is recited. This isn’t hypocritical. Rather, it’s another example of the deceased serving as the catalyst for mitzvah observance. But if one can’t make it to shul, yizkor should still be recited at home. The key part of yizkor is the commitment to give tzedaka in merit of the departed, a commitment that can still be made from the privacy of one’s own domicile. (Learn more about yizkor here.)

So we may not have a day in which we dress friendly-looking skeletons up in cute costumes but we do have five days on which we remember the deceased – the day of an individual’s yahrtzeit and the four days on which we collectively recite yizkor for all of our departed. Of course, any day that you want to study Torah, donate tzedaka or perform another mitzvah in merit of the departed, it serves to elevate their soul!

Here's How Practicing Tai Chi Prepared Me for Torah Observance