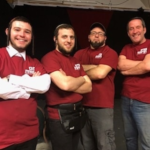 Moshe Grunfeld is not your typical Hasidic Jew, having built his once-creative outlet into a full-time career in the realm of special effects and theatrical makeup design and photography. He grew up in Borough Park, Brooklyn as a Skverer Hasid, then became close to the Munkatcher Rav in yeshiva and now considers himself to be Munkatch. When he was in yeshiva, he was helping out with counselors at a camp before a play. “Somehow at the last minute, the makeup artist didn’t show up…the show was about to start but no makeup.” Grunfeld saw some makeup and had no idea what he was supposed to do with it. Despite there being “glue and hair all over the place,” Grunfeld pulled it off and had a lot of fun doing it. “I love to be creative. I saw how I took one face and made it totally unrecognizable.” That gave him the confidence to do it again. 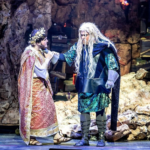 Soon after, he had the opportunity to help with another play. “I just went from there.” He was then contacted by several camps who had heard of his reputation and opportunities grew. “I researched, I got books, I bought a whole [program] which comes with DVD’s.” With this additional training, Grunfeld was hired by some of the biggest productions in the Hasidic world. “Since Hasidim don’t watch a lot of movies, tv, videos [overall], the only time they have entertainment is Chol HaMoed Pesach and Sukkos.” There are two companies that make huge productions during this time. Usually taking place at NJPAC (New Jersey Performing Arts Center) in Newark with 3500 seats, these four-to-six-show runs cost over a million dollars in production budget. “You’re talking about legit big productions. My team of [non-Jewish] makeup artists that I hire for the productions, they do a lot of different productions, and they’re usually wowed by what’s on stage. They’re usually blown away.” This shows that despite the fact that the Hasidic community may choose to limit their entertainment, “when they have entertainment, it’s going to be the best quality.” 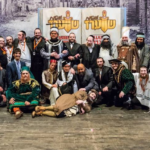 These productions used to take place at Brooklyn College and smaller theaters. Now, the team behind them, the Interen Chavraya (the under/behind-the-scenes crew), and all their shows have the name Interen in the title. They focus on historical tales and have covered the Revolutionary War, ancient history and more. People travel from England, Israel and other places to see the shows and to come see their families for Yom Tov as well. Women have their own productions produced and seen by them, and are also able the male shows via video feeds  in separate halls. While they do hold open auditions, most of their referrals are through word-of-mouth. Other shows, put on by a group called the Epic Shpiel, have a group that appears in many of the productions. Their own fanbases follow and look forward to seeing them. The Interen plays are musically-minded and more play-like and Epic productions are more movie-like in their arrangement and format. 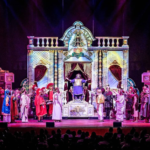 Many of the plays have focused on Tanach, and recently have covered stories of Tzadikim. “The most popular character that people recognized right away was George Washington. Every character is designed beforehand and run by the directors and producers to make sure the vision is mutual.” 6-8 weeks before the productions, Grunfeld starts prepping the shows.

While Purim Shpiels have been popular for hundreds of years, some Hasidic communities didn’t originally have the practice. However, now several groups put them on. Grunfeld does a lot of business creating special faces on men for Purim. “For some people, it’s literally their life. I have customers, they start messaging me right after Sukkos. They are so into it for 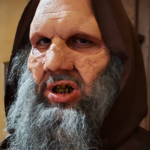 months and months before, [knowing] exactly what they’re going to do. I have a customer [who by the time it’s] Chanukah, [already] have a costume already set up. This is the one day that they can let loose and be themselves.” Grunfeld can be reached at his “new faces” website, punimchadushes.com.