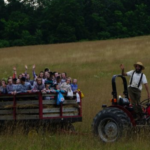 Tu B’Shvat is an all year long celebration when you’re working farmland, as Hasidic Jew Yisroel Bass does at the Yiddish Farm in Upstate New York. The farm was founded in order to “expand the role of the Yiddish language, serve as a bridge between Yiddish speakers of various backgrounds, and to promote environmental stewardship through organic farming.”

Bass was born in Queens and grew up on Long Island in a Conservative Jewish home. When he was a child and explored his family history at school, he found that he wanted to connect more to his heritage. He relates, “One of the stories my mother told me which had a huge effect on me was that her mother, her sister and her aunts arrived at Auschwitz with her grandmother. When they were separated on the line, my great-grandmother gave one of her gloves to her granddaughters and said [they should keep it to remember] ‘If you survive the war, you should remain Jewish daughters.'” Bass started thinking about what that meant. As the youngest of many cousins, he saw that Jewish engagement wasn’t prioritized. Years later, around the time of his bar mitzvah, he went to get supplies in Queens. He picked up a Yiddish textbook then and was fascinated by it. That led to keeping kosher and taking other steps towards becoming religious. “It started by looking back at my family’s history and became an active part of my identity.”

It was Yiddish which drew Bass towards Chassidus. “[Yiddish speakers] have a way of communicating and a worldview that today’s secular, assimilated Jew would never be able to have.” Bass realized there was a lot to uncover. By the time he was eighteen, he was starting to keep Shabbos and looking for more guidance. “There was a learning curve getting from YIVO Yiddish to what is actually spoken today.” He started taking Yiddish classes with a Holocaust survivor in Los Angeles and then moved to New York, looking for a community. He is mostly self-taught in Judaism but learns with mentors and chavrusas.

Bass studied philosophy at City College of New York. The farm opportunity came around as Bass tired of living in the city. He met a group of Yiddish-speaking people and realized that he wanted to find a way that “Yiddish was a means rather than an end to itself.” Bass also discovered that he loved farming. He spent two summers farming with others before trying it on his own. “It was great to be busy, employing Jewish workers and doing something that not too many other people are doing [in our community].” Founded in 2012, the farm provided a place for students to learn Yiddish in an immersion environment and spend time working the land.

A Torah connection with farming makes it a perfect job for a religious Jew. “So much of the agricultural laws have to do with Eretz Yisrael except Peah and Orlah which we do observe here with our blueberry plants.” Bass enjoys the challenge. They now have 350 blueberry plants at the farm, along with some apple trees. The time that it takes to farm is part of the appeal to Bass. The physical toil and the patience it takes are, in his opinion, character-building.

Wheat and spelt are also grown there and they are currently making flour to bake matzahs. “That’s a big connection to our tradition and the land that we have here. Pesach has a history of being a great introduction to yiddishkeit for me as a child.” More than that, the process of preparing for Pesach becomes a year-long reminder of that special connection for Bass. “It connects us year-after-year. We’re tilling in August, we’re planting September-October, it’s sitting over the winter, we’re fertilizing it in Spring, we’re cutting it in July.” Then there’s the gathering, the sifting, the baking.

With funding from a family foundation, they have been able to build a mikvah on the property and continue to expand their offerings. While the Bass family lives close to Kiryas Yoel and Bass sometimes daven there, they are not directly affiliated with the community. In the summer, they have a minyan there and their kids go to school in Monsey. When they can, they travel to Boro Park where Bass is close with his Rebbe, a talmid of Rav Ashlag in Israel. “He’s a really amazing Rabbi [as well as his] family and group of people that daven there.”

Since 2012, the farm has been doing tours, sometimes for hundreds of kids at a time. A big portion of their clients are Hasidic schools, who come to the farm for a haywagon ride, in addition to seeing how combines and organic produce work. “We have organic potatoes which we use to teach younger kids. They learn about the basics of how things grow, that things don’t come from the grocery. [We have them] digging for treasure (potatoes) to come home and put them in their cholent and their kugel.”

Soon after Pesach, they will open again for farm tours. Until then, they are working on baking and shipping the 1000 pounds of matzah they do each year.

Learn more about Yiddish Farm and order their matzah here.