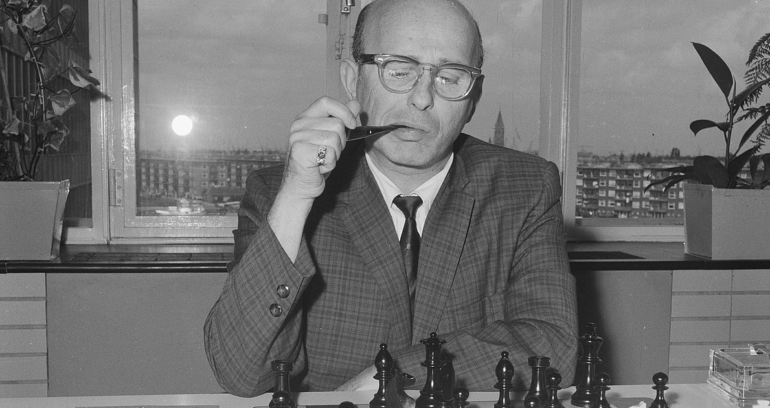 With 62 million people having viewed the Queen’s Gambit now on Netflix, the long-beloved and admired game is back in the spotlight. From its origins in 5th century India and its spread to the Middle East, to modern-day yeshiva chess clubs around the world, Orthodox Jews have long-loved the strategy-based game. But have you ever heard about the American Orthodox Jewish International Chess Grandmaster Samuel Reshevsky? The eight-time winner of the U.S. Chess Championship, he was also a world chess champion from the mid-1930s through the 1960s, tying for third and second place in the World Chess Championship as well. For the all-time record, Reshevsky is tied with Bobby Fisher.

Reshevsky was a child in Poland when it was evident that he was becoming a chess prodigy. After learning to play at four-years-old, he was giving exhibitions and beating accomplished adults (sometimes up to 30 at a time) at the game by age eight. This brought his family to America in 1920, where young Reshevsky toured the country playing games, becoming the youngest player ever in the 1922 New York Masters tournament.

After taking a break from chess to complete high school and get a degree in accounting from the University of Chicago, Reshevsky settled in New York and went on to compete in championships while working as an accountant and writing about chess for The New York Times among other publications, and wrote eight books on the topic. As a competitor in a record 21 U.S. Championships, he also holds records for the most games played (269), most finishes in the top three places (15) as well as the most games won (127). In 1950, the World Chess Federation named him International Grandmaster of the game.

Reshevsky’s family were Gerrer chasidim and known descendants of the Arizal. Reshevsky observed all that he could while playing, working and starting a family. Around 1950, Reshevsky’s father passed away and Reshevsky took it upon himself to make sure that he never played in a tournament on Shabbos again. Concessions were made for this from that time until his death in 1992. According to stories, Reshevsky once asked the sixth Lubavitcher Rebbe, Rabbi Yosef Yitzchak Schneerson, for a blessing for success in a chess match. The Rebbe agreed to do so if Reshevsky would try to study Torah every day. When the Reshevskys lived in Crown Heights, Brooklyn, Reshevsky was known to daven at 770 Eastern Parkway. In 1948, the Rebbe explained the spiritual aspects of chess at a Farbrengen with Reshevsky in attendance. The Rebbe apparently said of chess, “There is one king. All of the other pieces revolve around him and their entire mission is to protect and serve him. God is the King, all else was created by Him, given the opportunity to connect to His truth and to serve Him.”

When Bobby Fischer debuted on the U.S. Championship scene at age 14 in 1957, he won for the next eight tournaments. The seven-time former champion Reshevsky became rivals with Fischer, reportedly saying before a 1960 tournament, “I would settle for 19th place – if Fischer placed 20th.” Reshevsky went on to win that tournament, the only time he placed ahead of Fischer internationally. The two players then met to play a 16 game match in New York and Los Angeles, and although Fischer was then U.S. champion, Reshevsky was favored to win. After eleven games and a tie score (two wins each with seven draws), the match ended with Reshevsky receiving the prize fund. Seven years later, Fischer turned up nearly an hour late (and close to an automatic forfeiture) for a game with Reshevsky without apology. Reshevsky and Fischer each refused to play various games over the years because the other was there, but did appear on the same team in an international tournament in 1970. Their rivalry became known as one of the fiercest in chess history, but Fischer had great respect for Reshevsky.

When he was 70-years-old, Reshevsky asked Rabbi Menachem Mendel Schneerson If it was time for him to retire. The Rebbe answered that it would be a kiddush Hashem for him to keep playing. Soon after, Reshevsky upset the Russian world champion at that time, and received a standing ovation on the player’s home turf of Moscow for his efforts. The Rebbe asked Reshevsky to reach out to fellow-Jew Fischer in the 1980s, to help him connect to Torah in a way that would help get Fischer out of his isolation and depression. Fischer agreed to meet with him. They met for three hours, with Fischer reportedly asking Reshevsky many questions about Judaism.

During his long chess career, Reshevsky played eleven of the first twelve world champions and defeated seven of them. He is still known for being one of the greatest players of all time.

Why I Didn't Love "Soul"

Dubai's Jewish Community Gets a Boost From Haredi Israelis