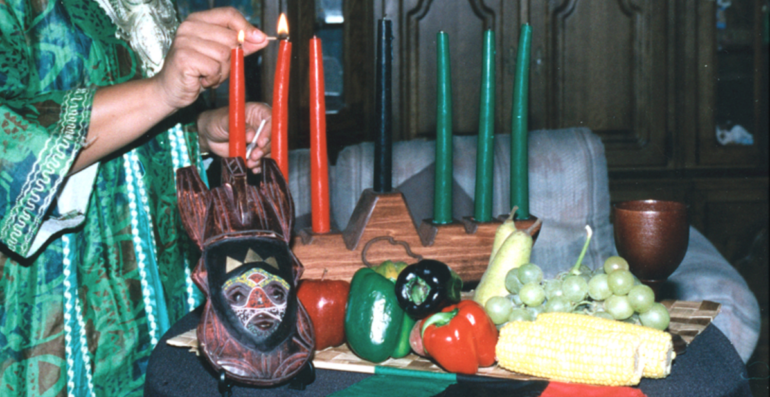 Is Kwanzaa A Holiday That Jews Can Celebrate?

I have a question that I’m hoping that you could guide me on– I’m Jewish– my mom is Sephardic and my dad is black. Given the political climate of the past year with racial reconciliation, I was thinking about Kwanzaa. Is this a holiday that Jews can celebrate? Is it idolatry or violate some other prohibition? Any guidance would be wonderful. Thank you in advance!

Thanks for your question, which I must admit is a new one to me!

Jews are allowed to celebrate non-religious national holidays like Mothers Day, Independence Day and Thanksgiving in the US, and I suppose Dominion Day, Bastille Day and Guy Fawkes Day in Canada, France and the UK, respectively. We are not permitted to observe holidays of a religious nature, even if our society also celebrates them secularly. This includes not only Christmas but such days as Halloween, Valentine’s Day and St. Patrick’s Day. The question is, which kind of holiday is Kwanzaa?

Maulana Karenga created Kwanzaa in 1966 as an African-American alternative to Christmas and it seems to be all about African cultural heritage, not religion. Karenga seems to have been at least partially inspired by the Zulu Umkhosi Wokweshwama celebration, though I have been unable to ascertain whether that holiday is religious in nature. (Trying to extricate Zulu culture from religion goes too far down the rabbit hole.)

Karenga certainly maintained that Kwanzaa was not a religious holiday. He wrote that “Africans of all faiths can and do celebrate Kwanzaa, i.e. Muslims, Christians, Black Hebrews, Jews, Buddhists, Baha’i and Hindus, as well as those who follow the ancient traditions of Maat, Yoruba, Ashanti, Dogon, etc.”

The biggest objection I can see might surprise you. The Kwanzaa celebration involves a seven-branched candelabra called a kinara. The Menorah in the Temple was seven-branched (unlike the menorah that we light on Chanukah, which is nine-branched). The Talmud in tractate Menachos (28b), among other restrictions of copying the Temple, mentions a prohibition against making a seven-branched candelabra. This is codified in Jewish law (see Shulchan Aruch Yoreh Deah 141:8). There is a difference of opinion as to whether it’s permitted to own such a candelabra if one didn’t make it, and it is advisable to act stringently in this matter. However, all this only pertains to a candelabra made of metal. If one’s kinara is made of wood or ceramic, then it’s not an issue.

I’m no religious authority but I don’t know of any authority who has addressed this question. So far as I can see, however, it appears that Kwanzaa is strictly cultural (like Thanksgiving) rather than religious (like Christmas). If that’s the case, it shouldn’t be problematic for Jews to observe.

Why I Didn't Love "Soul"