The Orthodox Jewish Teens Who Aid Non-Jewish Communities In Crisis 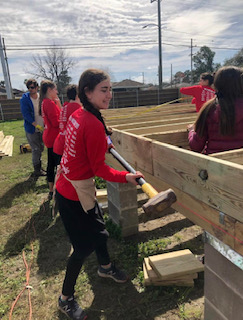 Last year, my 15 year old daughter asked if she could fly to New Orleans with other girls from her Orthodox Jewish high school to rebuild houses in some of the poorest areas of New Orleans that still had not recovered from Hurricane Katrina. The group was also scheduled to help a neighborhood prepare for future floods. It was a beautiful idea. Religious Jewish communities tend to be close-knit because they are centered around synagogues that everyone needs to be able to walk to on the Sabbath.

Laws of tzedaka (charity) say that we are supposed to help those closest to us first. So we must first prioritize the people in our home, then our extended family, and after that our community. But what about the people beyond our community? We cannot only keep acts of kindness close to home. Judaism believes that all of humanity was created in the image of God, that we all share a common ancestry in the brotherhood of mankind. It’s important that we don’t just believe this, but that we put this idea to practice.

That’s why my husband and I were delighted to send my daughter on this trip which was sponsored by New Jersey NCSY which has taken almost eighty groups of Orthodox Jewish teens on similar missions for the last twelve years. NCSY believes that when these teens engage in meaningful volunteer service, they learn about the Jewish value of responsibility and helping our fellow human beings in a time of need.

Led by director Rabbi Ethan Katz, New Jersey NCSY aids all kinds of communities struck by natural disasters by providing them with the necessary physical rebuilding and emotional support. These organized trips launched immediately after Hurricane Katrina and now constantly receive requests for help. NCSY has sent missions from Texas to Minnesota, from Puerto Rico to Atlanta. They partners with organizations like Habitat for Humanity, South East Recovery, Hike For Katrina, Nechama, and Green Light.

The locals of the towns and cities they’ve visited have conveyed how inspired they are and appreciative of what these teens are willing to do for others. “It’s an amazing awakening moment for these kids…these kids come back with feeling tremendous amount of gratitude,” for their communities, schools, and families with the understanding that they need to be actively aware of and involved in the world and its needs.

“It was incredible to see how small acts for us could make such big impacts on people’s lives and their perceptions of Jews as a whole,” my daughter explained.

How Personalizing Our Relationship With God Prepares Us for Elul

Meet Nechumi Yaffe, The First Woman Raised Hasidic In Israel To Get a PhD