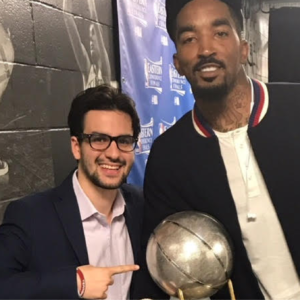 Daniel Hazan is the youngest sports agent to ever sign a player into the NBA, and he’s done it while being an Orthodox Jew. As seen in our video about former Knicks player, Chris Smith, Hazan’s religious life has nothing but a positive impact on the people around him. The founder of Hazan Sports Management, Hazan started his business while still in college at Yeshiva University. “The school did a really good job of exciting me about the business world to the point that I was still in school and wanted to try to start my own business.”

Hazan grew up as the son of the chazzan of the Moroccan shul in Manhattan. He was a die-hard NY Knicks fan. “I used to stand outside the green canopy at Madison Square Garden chasing after autographs.” He once pursued JR Smith and Chris Smith. Three years later, he managed both of them. “On Shabbat, I used to go on the basketball court [to play] and make it back in time for mincha.”

His initial inspiration was from Dean Strauss from Sy Syms School at Yeshiva University, “He was very influential in… moti 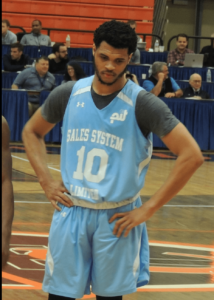 vating me to pursue my dreams.” Hazan remembers that he was in a sports management class and a teacher told him that what he was doing outside the classroom would benefit him more than anything he could teach him. However, the school was key to giving the students resources, “and more than anything, a lot of support.”

From his apartment in Washington Heights, “I signed a couple of players that I thought were good,” and although their careers didn’t pan out, it led to his next step. “I met a person who was starting a professional basketball league in Mongolia. I had never heard of the country before in my life.” Hazan quickly made work of it, bringing American players to their league. He became the most successful sports agent in Mongolia overnight. “I got a chance to meet the ambassador to Mongolia from the United States, and got all these honors.”

From there, Hazan’s career skyrocketed. “I got lucky, I signed a player by the name of Elijah Millsap.” He signed with the NBA to a three year deal with the Utah Jazz. “He was the only thing to give me hope to make my dream come true.” That was a big accomplishment and Hazan has negotiated 17 NBA contracts from there and now represents 21 players.

There are 750 agents and only 75 of them have players in the NBA. Many agents are lawyers because a lot of what they do is contract negotiations. “I got my NBA license without even going to law school.” It was a gutsy move that forced the NBA to change their rules and Hazan has reaped the benefits ever since. He contacted players via Facebook and pitched them on his being an agent. “That was my main focus, building credibility and building from there.” It was under two years from starting his company until he signed his first player into the NBA. He has since become a finalist for the 2016 Forbes 30 Under 30 list in the category of sports. 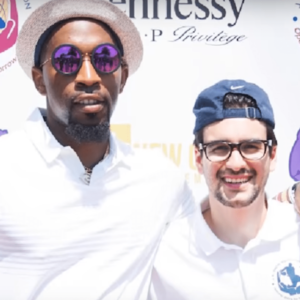 Sports agents have a responsibility to “get them opportunities to play on teams.” They help with marketing, sneaker deals and appearances. “Every person has their own niche. Some agents are former basketball players…I came in and my pitch was my energy. I was young, hungry and going to work hard.” Hazan also has an edge in that he is the same age as most of the players he represents. They play video games together and connect together in ways that other agents can’t.

Hazan’s faith is worn on his sleeve and his players respond to that. “When you go through a process of trying to accomplish your dream, whether you’re in the NBA or whether…you’re going through injuries or not, the one deciding factor that helps you get through the tough times, is faith. For me, that’s something that’s really important to articulate to my guys.” His players all know that he keeps Shabbos too. “The guys will send me text messages saying ‘Shabbat Shalom.’ They think it’s funny, but it hasn’t had any negative effect on our career.”

Last night’s NBA Draft was especially exciting for Hazan. “It’s the 60 best players coming out of college. The biggest name this year is Zion Williamson.” His client, who had never had much contact with Jews, let alone religious ones, before Hazan is Quinndary Weatherspoon, a four-year star guard from Mississippi State. He was selected last by the San Antonio Spurs with the No. 49 pick in the 2019 NBA Draft.

“We’re six years into the business and…for us this is a dream come true.” Hazan and his staff had been saying tehillim for the draft and the rabbis who come to give a dvar Torah in his office every Friday were saying Misheberach for it. “My biggest goals, we keep on setting and we keep on getting. [Let’s] do it again next year.”

Kiruv Organizations Must Stop Sending Participants To Places That Reject Them

How Yeshivas Grow Future Engineers & Other Orthodox Jews in The News