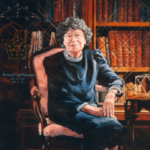 If women in STEM is trending in the 2010s, then a woman who rose to the top of the field of Mathematics over 60 years ago was certainly a trailblazer. An Orthodox Jewish women who did this was basically unheard of.

Enter Dr. Edith Luchins, born in Poland in 1921, the oldest of four Hirsch children. Her father was a successful importer/exporter, but they left for Brooklyn before the war when Edith was 9. Luchins flunked the first grade she was put into, vowing to try harder. Her daughter Anna Greenfield says, “She ended up being valedictorian at age 16.” Luchins went on to receive the Rensselaer Distinguished Teaching Award, the Darrin Counseling Award, the Martin Luther King Jr Award, the Rensselaer Alumni Association Outstanding Faculty Award and an honorary membership in the Society for Gestalt Theory. 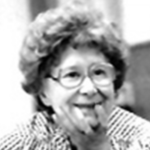 Although the Hirsches were not observant, they kept a semi-kosher home. Luchins wanted to become a secretary. “She enrolled in a WPA program to learn to type, [but] the typewriters didn’t come in. Instead, she took a psychology class and met my father [Abraham Luchins]…who told her ‘you’re too smart to become a secretary. You’re going to college.'” He would not marry her until she finished Brooklyn College four years later.

Abraham’s observance inspired Luchins to keep Shabbos and kosher. “She learned a lot over the years. When she got her Ph.D. in 1957, her father was so delighted, he said ‘What can I do? I’m so proud of you.’ She said, ‘I want you to redo your whole kitchen, make it 100% kosher so I can bring my kids home.'” The Luchins moved to Oregon and then Miami in pursuit of Edith’s education. Luchins received a tenure-track position in Albany, where Greenfield was raised through high school along with four siblings. “For her to go back and finish her Ph.D. with four children [at the time] was pretty spectacular.” Greenfield herself now has a Ph.D. in biochemistry. “She taught me calculus in one week. She was an amazing teacher.” Wherever she could, she worked to improve curriculum in yeshiva schools for math and science.

At the time Luchins received her Ph.D., only 1% were given to women. “She never thought of herself separately as… an Orthodox woman. She kind of blended well with everybody. She was well-loved. She worked well with her colleagues.” She went on to do studies in gender differences in processing and in math. “She always said that math was a great career for a woman since she could always take her legal pad of paper with her wherever she went. She would take us to the park and them work on a theorem.” While Abraham did most of the cooking, Luchins’ specialty was baking. “They did share a lot of the responsibilities of the home.”

Jewishly, Luchins was just as involved as in the academic aspects of her life. “She was the first woman to serve on the board of directors of the Orthodox Union, a founding and sustaining member of the Maimonides Day School in Albany, she spoke often for Chabad…she led a mishna group, was President of the Mikvah Society. She kind of fit it in wherever she was.” A student once came to interview and assumed she was the secretary. She made him a cup of coffee as he asked, and then proceeded to interview the then-mortified student. “She wasn’t presumptuous in any way.” She liked to mentor women and made a point of selecting female graduate students to help them into careers in computer engineering, math and science. She wrote hundreds of letters of recommendation. “She was the first woman to be appointed full professor at Rensselaer Polytechnic Institute… equivalent to MIT. She taught there from 1962-2002…She loved everybody.”

Luchins was always comfortable professing her observance, having no problem telling people “I’m an Orthodox Jew. I need Shabbos off.” Her secretary at RPI was nervous about asking for the Jewish Holidays off, and Luchins told her not to worry. “The days that I have off, you have off.” She grew in her observance as her sons came home from yeshiva with more knowledge. She was always respectful of the religious needs of other faiths as well. “My mother was also trying to be a matchmaker…trying to get her Jewish students to date each other.” She was a visiting professor at West Point, where she was eulogized in saying “She was one of the foremost mathematicians and math educators in America… Everyone on campus was saluting this woman wearing a sheitel and a skirt.”

Personally, her achievements were all-the-more impressive. “She had five children, at the time she passed away, 22 grandchildren, 13 great-grandchildren. She now has 56 great-grandchildren, [mostly] observant Jews. She got the highest status in her field as well.” While many of her descendants went into STEM-related professions, there are rabbis among them too. Three of Greenfield’s four brothers have smicha as do two of her sons. “She remembered us all. Everybody got a birthday card with a check inside.” Greenfield’s relationship with her stands apart though. “We had a special relationship…I was very blessed by having a mother like her.” Greenfield’s eldest daughter once had to write an article on her hero. “It was my mother. ‘My Grandmother, the Grand-Mather.'”

What Are the Health Benefits of a Kosher Diet?

Should Youthful Indiscretions Be Forgiven?