If stereotypes are to be believed, then a Hasidic woman is supposed to be quiet, meek and, stay behind the scenes. Luckily, that’s not the case. Our heroine did not have the privilege of receiving a strong education. Born in Poland, she attended a state school until age thirteen, but her family’s poor financial condition precluded her from pursuing her formal education any further. She gave herself a Jewish education through self-study of texts, from the Tze’na U’rena, a Yiddish translation of the Chumash that was standard fare for women, to Talmud study.

Our heroine was disheartened because she saw boys and men involved in intense Jewish learning and spiritual pursuits, while women remained uneducated and their religious lives empty. She is quoted as saying, “We stay at home, the wives, the daughters with the little ones. We have an empty Yomtov. It is bare of Jewish intellectual concentration. The women have never learned anything about the spiritual content that is concentrated within a Jewish festival. The mother goes to Shul (synagogue). The service rings faintly into the fenced and boarded-off women’s gallery. There is much crying by the elderly women. The young girls look on them as beings of a different century… Outside the Shul, the young girls stand chattering; they walk away from Shul where their mothers pour out their vague and heavy feelings…Further and further away from the Shul they go, further away to the dancing, tempting light of a fleeting joy.”

A generation of girls and women were lost, uninterested in Judaism.  Our heroine wanted to help fix this situation, to spread the joy and knowledge of Judaism. But she was a poor, uneducated, divorced Hasidic woman. What could she do? She would find the answer to that question on that fateful Shabbat Chanukah in 1915. She and her family had fled Poland because of World War I and gone to Vienna. In Vienna, she looked for a synagogue at which to pray. The apartment her family had rented wasn’t located in the main Jewish area, so she was thrilled when she found a synagogue a few blocks away.

The rabbi of the synagogue was Rabbi Dr. Moshe Dovid Flesch, a follower of the ideology of Rabbi Samson Rafael Hirsch. On Shabbat Chanukah, he spoke about the heroics of women in the Chanukah story, about Yehudis, who risked herself to defeat the general Holofernes and save her city. He encouraged the women present to follow the examples of heroic Jewish women throughout history and to be heroines as well.  Our heroine determined to answer this call and devote herself to saving Jewish girls through education.

This Hasidic woman—our Chanukah heroine–turned the idea of girls learning about Torah and Judaism from something prohibited, against tradition and socially unacceptable, into a way of life for Jews all over the world. Before her revolution, the Jewish community had ensured that boys had a Jewish education, but had neglected girls. And today, because of this woman’s work, it is a forgone conclusion that girls are also entitled to a Jewish education, and that girls’ education is a communal responsibility. The entire Jewish community today owes a debt to this Hasidic woman, this unexpected leader.

Sarah Schenirer was the founder of the revolutionary Bais Yaakov movement, the movement for mass formal Jewish education for girls. Sarah returned to Krakow towards the end of the war and started the first Bais Yaakov school 1917. Her school was very successful and other communities began petitioning Schenirer to start schools in their towns. Over the next 20 years, Bais Yaakov spread across Poland and then across Europe, with around 250 schools functioning at the start of the Holocaust. The schools then spread to Israel and America, where they exploded in numbers. At the same time, other communities started schools for girls that, while not following the same religious ideology of Bais Yaakov schools, modeled themselves after Sarah’s innovation.

Sarah’s educational movement was an unequivocal and outstanding success. All members of a Jewish community today, whether they or their family members attended a Bais Yaakov or not, owe their family’s Jewish education, in some part, to Sarah Schenirer.

What makes Sarah such an excellent role model? For one, she took action. She wasn’t the first, or only person to lament girls’ lack of education. For decades prior, there was a steady debate amongst Jewish leaders on whether girls should be provided a formal Jewish education. There had been talk for decades. But no action. Sarah took action.

That is a message she transmitted to her students. She taught the famous Mishnah from Pirkei Avot, “In a place where there is no leader, strive to be a leader” (B’makom shein Ish, Hishtadel L’hiyot Ish). She instructed her students that when no one is taking action, you need to take action.

Sarah was not only a leader herself, but she cultivated her students to be leaders themselves. She helped create a generation of educated female leaders, something that had not previously existed, and that in turn inspired future generations of girls and women to follow in Sarah’s example and become leaders as well.

Sarah’s story also teaches us about the power of the individual. She illustrates the tremendous impact that one person can have. Sarah did not have money or prestigious lineage, characteristics that would have made her predestined, so to speak, for leadership. But she had the passion and the drive to make a difference.  And the willingness to put herself out there for the sake of greater good. She truly followed the example of Yehudis that Rabbi Dr. Flesch described to her on that Shabbat Chanukah day.

There is another story here. That of a local shul rabbi. Rabbi Dr. Flesch would go on to be murdered in the Holocaust. His name would probably have been forgotten to history. Except that a woman sat in his synagogue and was inspired by his sermons. That woman credited him for inspiring her to start Bais Yaakov, and his name is remembered.  “It was in this shul,” Sarah wrote, “that today’s popular Bais Yaakov movement was born!” It’s doubtful that Rabbi Dr. Flesch thought, when writing that Chanukah sermon, that he was sparking a great revolution in Jewish life. This only further demonstrates the power of the individual and the power of our words to build, create and positively impact the world. 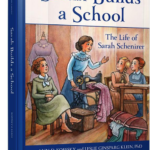 Leslie Ginsparg Klein, PhD is the co-author of Sarah Builds a School, a new children’s book that brings Sarah’s inspiring and empowering story to children. Co-written with Ann Koffsky, the book present Sarah Schenirer as a relatable role model and encourages children to strive to emulate her positive example. Sarah Builds a School is available at local Jewish bookstores, on Menucha Publisher’s website and on Amazon.com.

Leslie is the Academic Dean of Women’s Institute of Torah Seminary/Maalot Baltimore. Dr. Klein received her Ph.D. in Education and Jewish Studies from New York University, where she researched the history of Orthodox girls’ education in America and the Bais Yaakov movement. She is an alumna of Michlalah, Stern College for Women and the Wexner Graduate Fellowship, and a recipient of the New York Jewish Week’s “36 Under 36” award (2009). Dr. Klein is on the editorial board of Lehrhaus and the founder and director of Girls’ Night On, a not-for-profit organization that promotes Jewish women in music and the arts. Dr. Klein lives in Baltimore with her husband and children. Read more of Leslie’s work at www.lesliegklein.com

Inside Dubai's Jewish Community & Other Orthodox Jews in the News