I am the founder and director of Jew in the City, a non-profit which reverses negative associations about religious Jews by highlighting an approach based on kindness, tolerance, sincerity, and critical thinking and makes engaging and meaningful Orthodox Judaism known and accessible.

I discovered you, with the rest of the world, in 1997 in your break out role in Good Will Hunting. I applauded you in 2014 when you and over 190 other Hollywood professionals signed a statement which said, “Hamas cannot be allowed to rain rockets on Israeli cities.” But today, I was dismayed by you when I read in the Daily Mail how on August 30 you dressed up as a caricature of a Hasidic man – knockoff black hat, glued on payos, fake tallis and all as you waved to the camera and said, “Shalom.” Your clip was posted (and then subsequently deleted) from the official Will and Grace Instagram account.

What harm did this “cute” video cause? I don’t want to get into a contest about which people have been subjected to the most oppression, but it is hard not to see how your stunt is a Hasidic version of blackface, which, according to Vox, “reinforces stereotypes and the idea that blackness is, at best, a joke.”

This sums up how your clip made me, as an Orthodox Jew, feel. That my religion and way of life is not much more than a gag or a punchline which can be publicly mocked and then quietly erased. I imagine you have positive feelings towards Jewish people with your standing up for Israel and friendship with your Jewish co-star, Debra.

I’m not looking for a media storm or the Twitterverse to loom down on you. I do believe a public apology is in order, with an acknowledgement that although religious Jews may look different and live differently, they do not deserve to be the object of mockery. No group does. I hope you will correct this lapse in judgment swiftly.

For the Jewish people, this time of year is known as the Days of Awe. These are days of contemplation, self-reflection, and repentance. No one is above reproach, but a platform like yours is a responsibility, and I hope you will use this misstep as a chance not only to say you’re sorry, but as an opportunity to teach others this important lesson. 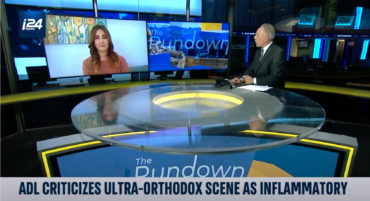 How Do I Stay Sane With All The Work Around The High Holidays?