The Orthodox Jewish Woman Who Proudly Hails From South Korea

With all eyes on Pyeongchang and the 2018 Winter Olympics, a worldwide interest in K-Pop, Korean television dramas and Kimchi is booming. Korean pride is nothing new to Chana Bilek, an Orthodox Jew from South Korea, with equal pride in the cultures she calls her own. “I was born in Korea. When I was just under 2 years old, I was left abandoned in a hotel and found by the staff, who took me to the police station.” Bilek was put into an orphanage, which was connected to the adoption agency that placed her with a family in Richmond, Virginia. Because she was sick and malnourished, she needed time to heal before traveling to the states. Just as Bilek was ready to make the trip, she contracted Chicken Pox and had to stay longer. 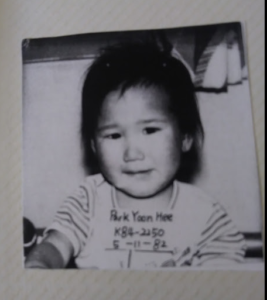 “Having no known identity, they determined that my birthday was approximately May 11 and gave me the Korean name Yoon-Hee Park.” Bilek was finally well enough to travel and was welcomed by her adoptive parents, Bill and Millie Hill, when she was two. They kept her Korean name and nationality part of her legal identity, naming her Caitlin Yoon-Hee Hill.

Bill was Jewish but Millie was not, and they initially raised Bilek in a home where they attended a Unitarian Church. They sent Bilek to Korean school on Saturday mornings so that she could learn about her birth heritage and culture. But things began to change. “I begged my parents to adopt another child. They adopted my sister from Thailand. Then God answered my prayer twice and my mother became pregnant with my third sister.” When Bilek’s new sisters arrived, her parents decided to join a Reform Synagogue and her Jewish journey began.

Alongside her mother and her sisters, Bilek converted to Judaism at age 10, driving two hours to a mikvah to do so. She also started to develop a closer relationship with God. When Bilek would question why she was adopted, her adoptive mother would tell her “God brought you here, there’s a reason for everything.” Throughout this time, Bilek remembers asking God to “Let my birth family know that I was okay…my uncle said that [since] the orphanage was part of a nunnery, that [probably] influenced me.” Bilek kept going to Korean School on Saturdays and Hebrew School on Sundays; they were both an integral part of her identity. The Hills brought Bilek to Korean festivals, taught her to make Korean sushi, known as Kim Bop and was tapped into Korean culture. She had a Bat Mitzvah, confirmation and became involved with BBYO (Bnai Brith Youth Organization). “At BBYO, I was the only one with black straight hair and Asian eyes…my whole life I had identity issues,” Bilek jokes. When she turned 18, her parents encouraged her to go to Israel, right around the same time that they became more observant and her parents started living an Orthodox Jewish life, turning her childhood home into a kosher environment. “I had thought ‘Whatever, you guys are crazy.’ As my parents stood firm in their changes, I was told to make my own decision.” Bilek knew about Orthodox Jews but was more concerned with Tikkun Olam.

Bilek arrived in Israel and got connected withan Orthodox outreach program. “The rabbi want[ed] to talk to [me]. I told him, ‘Rabbi, I’m Jewish.’ He starts asking me questions and told me that I was not really Jewish, but I could be [if I] walk with God… and that’s done by following halacha.” Bilek’s Korean heritage was a part of this. “Traditional Korean culture has a lot of parallels to Judaism…they teach honoring parents, honesty, hard work, and sensitivity. For me when it came to being Jewish, there was a lot of genetic makeup that made sense. I can feel it in my bones.” That helped Bilek to make the decision. “The rabbi said, when a neshama doesn’t finish its task in one life, it’s reincarnated to try again. I thought “Maybe this was my task to complete as I integrate two identities in serving G-d.” He told me to make the decision, ‘are you going to live a good life as a Noahide or as a Jew?’ Baruch Hashem, He gave me the message at the right time.”

Bilek converted in an Orthodox setting and went on to help found Hillel at VCU (Virginia Commonwealth University). “A part of me had distanced myself from other cultures because of my involvement in Jewish issues. It naturally waned.” Bilek studied intensely in Israel and met her husband Raffi, with whom she works as a counselor at the Baltimore Therapy Center, and live in the frum community with their four daughters. “Our daughters have big pride in Korea. Next door to Shlomo’s Kosher Butcher shop, there’s a Korean seamstress here in Baltimore, who loves them. They talk about the family and tradition they have in common. My [eldest] daughter wants me to take her to Korea. I want to go back [too].” In the meantime, Bilek has been sharing the Olympics with them, and more about her heritage with others in her community.

Bilek works closely with a varied clientele, but specializes in helping adpotees. “I believe my birth mother took care of me as best as she could. [Seeing the similarities between the cultures] makes me wonder about my background a little bit more. I take pride in knowing there are some other Korean adoptees here in Baltimore and Jewish world at large..My [adoptive] parents did a great job in guiding me. I’ve always been proud of Korea as much as being Jewish. I can express both sides of myself. The hand of God is what has guided me all along.” Having spoken about her experience internationally, Bilek is eager to share this message with the Jewish world at large as an inspirational speaker. “It’s something to be proud of.”

To book Chana Bilek for a speaking engagement email her at chanabilek@gmail.com.

Are You Allowed to Ask Questions in Judaism?