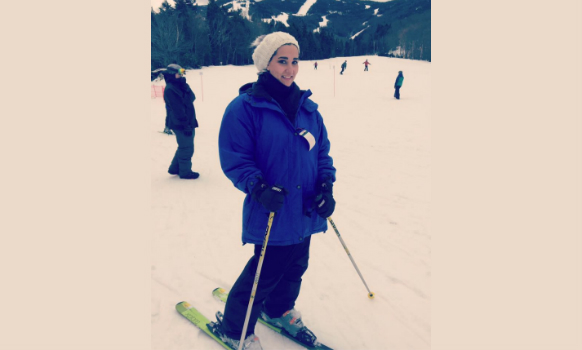 I know I don’t have to and I don’t judge women who don’t. When I was studying in seminary in Israel for the year during college (I took a year off after my freshman year), a girl in class asked my rabbi if baggy snow pants are OK to ski in. He said, “Yes.” (Though, it should be noted that there are those who disagree.) And yet, when I had the first opportunity to ski after I began wearing skirts only, I felt very conflicted about not wearing a skirt.

I started skiing around eleven years old: out west, in Canada and all over the Northeast, where I grew up. We had a house in the mountains in Upstate New York when I was a teen, so we spent many a weekend during those years on the slopes. I loved to ski, but I also loved looking great on the slopes and by mid-high school, I aimed to be a “snow bunny” replete with my oh-so-fitted snow pants. (Yet another example of the skin gap.)

At 17, I became an Orthodox Jew, started dressing modestly, and when skiing came up a few years later – even though I had permission to not wear a skirt – I felt like I couldn’t bring myself to. If my rabbi thought baggy snow pants were OK on the slopes, what about in the lodge? And if they were OK on in the lodge, what about the street going there?  The slippery slope (pun intended!) made me uncomfortable – I had developed a sensitivity.

But it wasn’t only about modesty for me. It was also about identity. In a skirt and hat or sheitel, I represented “Orthodox Jew” to the world. I liked wearing that badge. So I wanted to wear a skirt, but I, of course, knew that I had to be safe and figured it would be better to not look completely crazy on the slopes.

I started brainstorming how to be safe and “blend” without giving up this sensitivity I had formed. I thought of how the snowboarding style gear was becoming popular. Big, long coats, baggy pants. I wondered if I could get a coat almost to my knees and finish the rest off with a knee length, straight, stretchy skirt the same color as my baggy snowboarder pants.

I tried it out the first time, several years ago and was delighted. I had movement, it did not impede me any way. It was subtle, yet there for anyone who looked a bit closer, and when I got to the lodge, I was wearing a skirt. I’ve tried to take this approach with mitzvos in general and find the middle ground where I can feel comfortable halachically yet still feel like myself. Attempting to walk along the path of “the golden mean,” unfortunately often the road less traveled, has made all the difference.