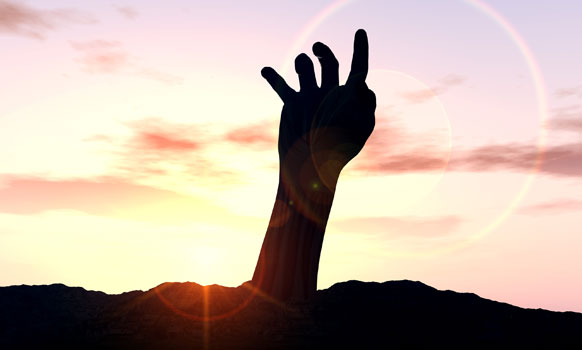 I have a question regarding the belief in the coming of moshiach (the Jewish messiah). That is the simple version. The longer is: I was not born a Jew, but I believe with all my heart that I have a Jewish soul and I am supposed to be Jewish. Because of that, my life is in some sort of disharmony where my body cannot practice the rituals my neshama (soul) needs to. The reason I haven’t sought out conversion is because although my soul wishes to embrace all of Torah my mind is currently standing in the way. I just can’t imagine there being a human moshiach, and I don’t know how I honestly could convert without believing in that. I know that it is a requirement to believe with your whole being in Maimonides’ 13 Principles of Faith, but when I come to 12 and 13 (12. The belief in the arrival of the messiah and the messianic era AND 13. The belief in the resurrection of the dead) then my mind puts on the brakes and the only thing I can imagine is zombies coming out of their graves (clearly not what is meant). So some people just say I shouldn’t convert…but I cannot imagine continuing to live as a non-Jew. Why did HaShem give me a neshama that yearns for connection denies me the ability to believe in 12 and 13. What should I do?

Thanks for your question. You didn’t tell me exactly what it is that you find hard to accept, so I’m going to have to make some assumptions. Are you picturing the moshiach as some kind of magical demi-god? A lot of people have very fanciful ideas about the moshiach and the messianic era but the moshiach is just a person. A righteous person and a great leader, but a normal human being – nothing supernatural about him!

Information about moshiach and the messianic era is scattered throughout the Bible. Much of it is in the book of Isaiah; chapter 11 is a good start . Read up and you’ll see how down-to-earth it really is. The sages of the Talmud tell us that there will be no difference between the messianic era and now except for one change: we’ll no longer be persecuted. Yes, you’ll find prophecies like “the lion will lay down with the lamb,” but those are widely accepted as metaphors meaning that the mighty will no longer oppress the meek. So when people say things like, “When moshiach comes, we’ll go to our shuls which will then fly to Israel,” I think they’re just wrong. I think they’re being overly literal with midrashim that are intended to be read allegorically.

As far as the resurrection of the dead, that’s another area that most people don’t really understand. First of all, it’s not when moshiach comes; it’s some time subsequent to that – could be hundreds of years! Secondly, it’s not everybody. Only some people will merit resurrection and, honestly, I think it’s pretty egotistical for people to assume they make the cut. Personally, I think it will be the exception rather than the rule.

As with moshiach, references to the resurrection of the dead are scattered throughout the Bible. One pretty explicit source is in the last chapter of Daniel. You say that you’re “with the program” except for these two concepts. Since these two concepts are in the Bible, it creates a new issue: believing vs. disbelieving what’s in the Bible. If you find my explanations, plus the fact that they’re in the Bible compelling, great. If you still have a problem with them, then you also have a problem with accepting what’s in the text. If so, that’s really three things. (Just saying.)

As an aside, these things both have precedents in past events: Moshe led the Jews out of Egypt the way moshiach is meant to redeem us from exile; a mass resurrection was witnessed by the prophet Ezekiel at the valley of the dry bones in chapter 37 of his book. If you can accept them in the past, why not in the future?

If you find it hard to believe that Biblical prophecies can come true nowadays, many have been fulfilled in modern times: The Jews returned to Israel as foretold (Isaiah 43); the land of Israel, which was desolate in the Jews’ absence, has bloomed (Isaiah 41). Jerusalem has expanded to many times its original size (end of Ezekiel); nations like Amon, Moab and Edom are gone but Egypt remains, no longer the world power it once was (Jeremiah 46); etc., etc., etc. So many amazing things have already been fulfilled, I have no trouble expecting a few more. If you really just can’t accept these ideas, perhaps look into being a Noachide. You have no obligation to convert and this way you’d be fulfilling what G-d wants from you as you are. I am happy to field any follow-up questions you may have.

Should Jews Stand While Praying On Airplanes?