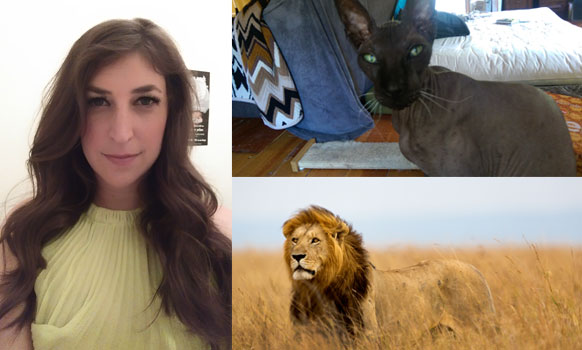 Mayim Bialik Weighs In On Cecil the Lion And Human Life

Editor’s Note: Yesterday Allison Josephs (aka Jew in the City) posted this Dennis Prager article along with the caption “Thoughts?” on Facebook. In his article, Prager wrote about the death of Cecil and spoke out against hunting, poaching, and cruelty to animals – all VERY against Judaism. But then he noted something upsetting: some people seem to believe that human and animal lives are equivalent (citing a study where children were asked “Would you save your pet or a stranger?” 1/3 said pet, 1/3 said stranger, 1/3 said “not sure”.) Allison’s post was met with the following comments:

“Your post is one of the reasons I am no longer Orthodox. Thanks for proving my assumptions were correct and Orthodoxy has some major fundemental problems. And just for a point, it is not just a LION! It was a living creature.”

“I don’t know, but I would never try to provide evidence in a debate that human life is superior to any other life because we are all animals after all. Biologically, we are an animal, although it irritates humans to know that…

“I pray that I am never placed in that decision having to chose parent or dog. I don’t deal in the stupid what ifs of life. And your question is as silly as asking a parent, which child would they grab in a fire? How can you ask such questions?”

I’ve been following the debate on the Jew in the City Facebook page and wanted to chime in for a few reasons. One, I am an animal loving vegan who lives a life according to the value I place on the lives of animals, and two, I am a person who has been educated about Orthodoxy by Jew in the City herself so I understand her perspective. I also think there have been some misunderstandings here.

Of course it is tragic that Cecil was killed, in the same way that it is tragic when any innocent animal is killed. As a matter of fact, it’s why I became a vegan and why I continue to advocate for all people eating fewer animals and not using animal products for clothing and fashion accessories. I choose to live my life according to the set of beliefs that animals are not to be used for our pleasure or consumption. There are plenty of Jewish vegans – Orthodox and otherwise – who agree.

I think some of the subtlety of this discussion is being lost among emotions. I acknowledge Dennis Prager’s perspective that we have entered a time in our culture where there are those who quite literally equate animal life with human life. As in, exactly equal. No exceptions. He and Jew in the City argue that that is theoretically problematic. In theory it is!

What do I mean “in theory”? Well, if you ask me about my very own beloved cat, Esau, I have a strong and binding emotional attachment to Esau (pictured above) in a way that I don’t for a stranger and never would. I have loved that cat and raised him and cared for him when he has been sick, and I sleep next to him and he is a part of my life in ways I could never imagine anyone understanding.

However, people like Dennis Prager are keen on pointing out trends in thinking, and it is true that there are a lot of people who would choose to save their pet over a stranger if a building was burning down. I don’t begrudge people that decision and if a building was burning down, I absolutely would take pause if I had to make the decision to choose a stranger over Esau. But I would choose to save a human. It doesn’t make me a bad vegan, and it doesn’t make you a good one if you don’t agree.

Jews, non-Jews, and any kind of talk show personalities are not bad people for bringing this topic up. If we all chose pets over strangers, this world would eventually be a very different and startling place to live in, and that’s a fact. Let’s make sure to separate fact from feeling, and keep the discussion humane. It’s what any animal lover or human lover would do!

Mayim Bialik is a four-time Emmy nominated actress who stars on the CBS hit series "The Big Bang Theory" and is also known for her lead role in the 1990s NBC sitcom "Blossom." She has a PhD in Neuroscience from UCLA and is the mother of two young boys. http://mayimbialik.net