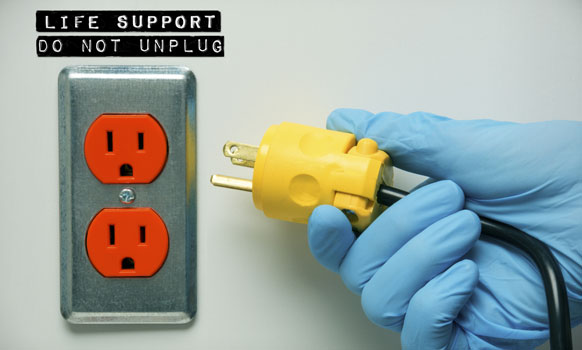 Can You Ever Pull The Plug? Life Support And Jewish Law

Since Joan Rivers’ death, several people have sent us questions about life support issues in Judaism, similar to the way that Robin Williams’ death piqued people’s curiosity about suicide in Jewish law, particularly as an effect of mental illness. I recognize that this is a sensitive topic and I address it with two caveats. The first is that issues such as this are far above my pay grade. Accordingly, while I am striving to impart information, I am definitely not attempting to rule in any matter of law. If anyone ever has a question of practical application in this area, he should contact a recognized Torah authority. (This is beyond the usual “ask your local Orthodox rabbi.”) The second caveat is that there are no doubt readers who have had occasion to address such end-of-life issues. Some of these readers may have acted counter to what I will soon say is Jewish law. No one is judging you. Having a terminally-ill loved one is a terribly difficult situation and no two cases are exactly alike. As the mishna in Pirkei Avos (2:5) says, we are not to judge another person until we have been in his or her place.

That having been said, the Jewish philosophy on life support is predicated on the belief that all life is sacred and is to be protected at virtually any cost. If a person will die from fasting on Yom Kippur, not only may he eat, he is required to do so. Similarly, in a life-threatening situation, one must violate Shabbos to call an ambulance or take someone to the hospital. Any mitzvah must be violated to preserve human life except for murder, incest/adultery, and idolatry.

Also integral in Jewish law’s outlook on this topic is the fact that Judaism has no concept of “quality of life.” All human life is equally sacred. An adult is not more entitled to life than an infant. An adolescent is not more deserving of life than a senior citizen. All of us – male or female, wise or foolish, able-bodied or infirm – everyone has an equal claim to survival.

This includes the terminally ill.

The Talmud (Shabbos 151b) tells us that one who closes the eyes of a dying person, hastening death by mere moments, is a full-fledged murderer. One who performs an act of euthanasia on a dying person could be executed for murder, the same as one who kills a healthy person (Mishneh Torah Hilchos Rotzeiach 2:7).

The idea that we don’t evaluate a person’s “quality of life” is a very good thing in that it keeps us from drawing lines between those we think have a reason to live and those we might deem to have no cause to keep on breathing. Our position is that everyone has a reason to live. We may not always understand another person’s “quality of life” but G-d does and He has told us to preserve life. This can be challenging, however, when dealing with end-of-life issues. If someone is in a coma or in pain, our emotions may tell us otherwise. But G-d does not want us to start picking and choosing who we, in our limited wisdom, think deserving of life. Our job is to preserve it.

On the other hand, we also have an obligation to alleviate suffering. This, as they say, is where things get interesting. We might do what we can to reduce a dying patient’s pain, even though some treatments may be life-shortening. Or perhaps we refrain from forms of treatment that might extend the patient’s life. (Remember: every case is different and a competent Torah authority must be consulted!)

When prolonging life and alleviating suffering clash, there are a number of factors involved in the decision-making process. Is the person going to die regardless of whether or not the treatment is administered? Is he or she undergoing great suffering? Do we know their wishes? (A living will is highly advisable to make one’s wishes known!) These are some of the main factors in evaluating such a case.

Pain medications like morphine are often given to terminal patients in order to alleviate their suffering. However, in addition to lessening pain, such drugs may also cause them to pass away sooner. Despite this unfortunate side effect, such drugs should not be withheld. Jewish law permits these narcotics to be administered provided that the intention is strictly to relieve the patient’s suffering and not to hasten his passing.

It must be noted that there is a difference between forgoing potentially life-extending treatments like surgery or chemotherapy and withholding food, water or oxygen. These things are considered to be staples of life and withholding them from the patient may be the functional equivalent of murder. (Imagine withholding food from an infant. Why should keeping it from someone on life support be any different?)

Lots of issues fall into this category. For example, is a DNR (a “do not resuscitate” order) permitted under Jewish law? What about a DNI (“do not intubate” – i.e., putting someone on a respirator)? The answers to these and other questions may vary from case to case. I cannot stress enough the need to contact someone well-versed in this area of Jewish law.

End-of-life issues are never easy. Trying to do what’s best for the patient is difficult to assess as the course of action to end their suffering may not always jibe with the course of action to extend their life. As trying as the situation is, the Torah provides us with the tools we need to walk that tightrope, all based upon the underlying premise that the patient’s life and well-being are just as valuable and important now as they ever were. (Click here for a discussion on organ donation and brain death in Jewish law.)

What is the Torah Perspective on Wearing a Mask and Social Distancing?

Is There a Jewish Equivalent to Chi?

Can Jewish Texts About Past Plagues Help Us Navigate Covid-19?

Can We Ever Sin in Order to Do Good?

Isn’t Swinging Chickens Animal Cruelty? How Could Religious Jews Do That?