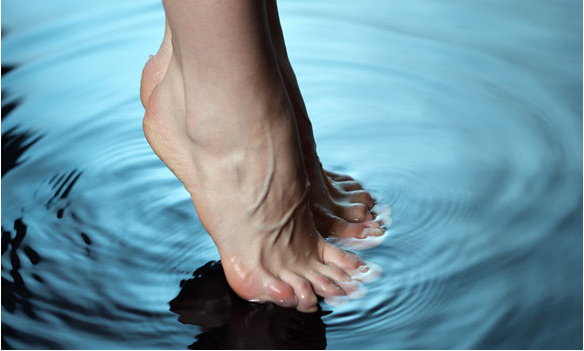 During a family trip several years ago it worked out that I needed to go to the mikvah. I checked for the closest one online, and the website explained that you had to make an appointment ahead of time. I called the day before my mikvah date and left a message but didn’t hear back. I called a few more times the next day and finally got through. When I arrived, the mikvah lady informed me that I had actually called too late and only because another woman (who was already in a preparation room) had scheduled an appointment were they there for me. (Glad someone was responsible!)

The mikvah building was small and I couldn’t help but hear through the door as I got ready. The other woman dunked before me, then upon leaving, the mikvah lady (who seemed to know her well), asked her a question. “Why did you decide to start going to mikvah since you didn’t used to?” I couldn’t make out the other woman’s answer completely, but the mikvah lady was so moved that on my way out of the mikvah, she said she had to tell me the amazing story that the other woman had just told her. It was highly usual, and I immediately thought, “Um, you don’t know this, but I am a collector of amazing Jewish stories!”

I got myself ready to go and met the mikvah lady in the waiting room. What was the big news, I wondered? Well, apparently this other woman used to live in this community and had been traditional, but never went to mikvah. Upon moving to a larger Jewish community with more resources, she thought that going to mikvah might be the next right step for her, but she had an uncommon and very challenging situation. Ever since her first period, she had an unusually long cycle. How long? Two weeks of bleeding.

I didn’t know that something like this was even possible! Such a long period (which this woman had endured for decades) was inconvenient and unpleasant in its own right and had been untreatable through hormones. But when coupled with the laws of taharas hamishpacha (family purity) – which require a husband and wife to separate physically during the duration of the bleeding plus seven days of non-bleeding – well it would be a tremendous sacrifice. Only one week of physical intimacy each month between this woman and her husband would be allowed.

Despite all that, this woman decided with her husband that in order to increase their closeness to Hashem, they would start abiding by the laws of family purity. (How many people would be willing to do this, I wondered.) And then something incredible happened. After the woman’s first time going to the mikvah, the next time she got her period, she only bled for a week. The same thing happened the next month and the one after that, and ever since then, this woman’s period has been only a week long.

I immediately thought of Nachshon ben Aminadav – a man we learn about from the Torah who trusted in Hashem when no one else did. When the Children of Israel were standing in front of the Sea of Reeds (i.e. the Red Sea) and the Egyptians were closing in on them, Moshe asked God to split the waters, but they remained static until Nachshon ben Aminadav had the faith to enter the water. He descended further and further until he was neck deep. At the moment he was about to drown we are told that sea miraculously receded and the Children of Israel could safely pass through.

Now we can’t know for sure whether or not there was a correlation between going to the mikvah and the women’s cycle changing, and I’m very much aware that many who do mitzvos do not get see the reward right away or maybe ever in this world. But because we do not live in a time of revealed miracles, I guess it’s my hope that every so often we are shown something out of the ordinary as a reminder that while there are reasons to doubt, there are also reasons to believe. The strongest feeling I took from this experience was that I was supposed to be there at that exact time to hear this message so that I could share it with you.

May we have the strength to trust in Hashem during challenging times and challenging mitzvos, and may our commitment merit us to see revealed blessings.

How Do I Not Judge Religious Jewish Women Who Aren't Modest?