I Want To Stop Being Jewish – Why Is There No Exit Strategy? 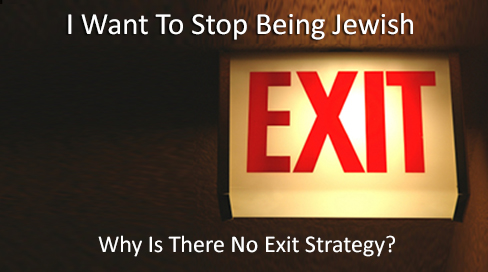 Here’s a question that no one seems to be willing to answer … how can one EXIT the Jewish community and why doesn’t the religion allow for it?! I was born to a reformed family who couldn’t tell you anything about “what it means to be….” I have never felt a connection to it (and yes, I’ve tried) and any association with it has always made me feel more an outcast in society. What bothers me the most is that the religious dogma associated with it polutes society with the notion that you are “born” into it. Nothing could be less true, in my opinion, or more offensive. It’s a religion … not a race! And it is only the religious aspect of it that proclaims it’s a race. Forcing someone that the religion believes was born into become a Jew is tantamount to forcing the title on them … and no better than the proselytizing that other religions do! Unless the religion wants to deteriorate from the inside-out, it needs to formulate an exit clause. I find myself having to force separation from the stigma by saying some not-so-pleasant things about the religion. I cannot respect it or it’s people until it respects me and my position. I AM NOT A JEW!

Thanks for your question. I am willing to answer it, even though I am sad that you need to ask it. I once joked that being a Jew is like being in the “Hotel California” – “you can checkout any time you like, but you can never leave!” But seriously – there were Jews throughout history who wanted out, so they left, they assimilated, they intermarried, but you know what – the non-Jews STILL considered them Jews. Remember how Jewishness was tracked in Hitler’s time? They went back at least two generations. Anti-Semitism has NEVER made sense – it’s just a reality that the Torah says will exist while we’re in exile. So even if we Jews could let you off the hook, the Anti-Semites of the world wouldn’t.

Why can’t you stop being Jewish? Well – let me ask you a different question. Let’s say that you and I were brother and sister, but you wanted out of our family. You could change your name, change your nationality, get plastic surgery, deny that we’re related, but at the end of the day, we share the same parents and therefore we ARE family, no matter what you do. And the same goes for being a Jew. You can believe what you want, call yourself what you want, but you are a descendent of Abraham, Isaac, and Jacob on your mother’s side, and therefore you are part of our family. We share a common history and a common destiny. We are spiritually bound to one another. Judaism IS more than just a religion, because other religions are usually just about belief and practice, whereas Jewishness does not go away  due to lack of belief or practice. At the same time, we allow for converts to be “adopted” into our family if they show that they are committed to our people and our way of life because if someone goes to such lengths to become a Jew, it’s because we believe that they are spiritually bound to our nation as well.

I’m sorry that our family has failed you, that you’ve never felt a connection to Judaism. Back in my pre-religious days, my only connection was cultural. It was still a positive one, but not particularly deep. I commend you for trying to make a connection, despite the fact that your parents didn’t raise you with one. But I wonder if you ever explored Orthodox Judaism. Have you ever spent a Shabbos with people who truly embody the essence of Shabbos and hachnasis orchim (hospitality)? Have you ever attended a Torah class given by a world class teacher? The kind that fills you with inspiration and leaves you awestruck?

If you haven’t, I would love to help you experience these things – not in an effort to convince you of how great being Jewish is, but rather to expose you to the best we have to offer. Perhaps such experiences will change your feelings, perhaps they won’t. But at least you’ll know what inspires those of us who do feel good about being Jewish. I know you believe that Judaism’s religious dogma “pollutes society,” but Judaism’s dogma brought concepts to the world like “love your neighbor as yourself,” “love your wife as much as yourself and honor her more,” and “don’t stand idly by the blood of your neighbor.”

Look, RSM, you can call yourself whatever you like. You can refer to yourself as a gentile. Who can stop you? You’re a free agent, living in a free country. All I will tell you is that for all the anti-Semites throughout the centuries who made being a Jew punishable by death and all the Jews – your ancestors and mine -who were willing to give up everything to hold on to their Jewishness. For those people who were willing to risk it all, I just hope that before you close the door forever, you know exactly what it is you’re leaving.

Measuring Up: Self-Reflection On My Birthday