The Heroes of Hurricane Sandy: Why Does Our Best Only Come Out When Tragedy Strikes? 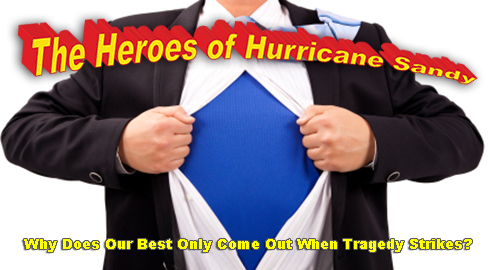 It happened during the year that I was studying in Israel. My daily prayers at that time, despite the fact that I tried to make them meaningful, often ended up being less inspired than I would have liked. But then, one morning, while I was praying, I heard my roommates talking about a terror attack that had just taken place. People were badly injured and dying just a few miles away from where I was standing, and in an instant, my prayers were on fire. As I beseeched the Almighty to heal the wounded and comfort the mourners from the depths of my heart, tears pouring out of my eyes, I suddenly became disturbed by what had just happened.

Why did it take such a tragedy to bring out my best? Why did the extreme suffering of others have to occur in order to make my prayers more connected? As I see the outpouring of prayers and generosity in the wake of Hurricane Sandy, this question troubles me again. Strangers opening up their homes to strangers to warm up, charge cell phones, move in with them. People collecting donations and supplies for those who lost everything. Food and water tirelessly being distributed to the hungry and downtrodden. Regular people stepping up to the plate and becoming heroes.

Why must there be such drastic suffering in order for many of us to tap into those resources lurking within? If that potential is there all the time, why can’t it come out more often? What if we could hold on to some of this inspiration after the Sandy victims are taken care of? To keep on praying with focus? To keep on giving with open hands?  To keep on empathizing with all the “quiet” suffering that happens every single day?

Sure, it’s easiest to call upon the “hero within” when there’s a major calamity affecting a large number of people, but what would the world look like if on regular days we were thinking about the sick, the poor, the orphans, the widows, those struggling with marital problems, infertility, dating woes, mental health issues, and praying for them and giving to them and opening our homes and our hearts to them?

You know what it would look like? Messianic times, or yamos hamoshiach, as we say in Hebrew. As a practicing, believing Orthodox Jew living in a cynical world, it’s sometimes hard to imagine what the utopia of yamos hamoshiach would look like. Or how achieving it would be possible. But the response I’m seeing from this storm gives me hope that we have a collective, untapped greatness which could continue to spread goodness into the world even after life goes back to “normal” if. and only if, we work to hold on to it.

The human mind cannot understand the thoughts of the Almighty, so I won’t pretend that I do, but I wonder if one of the reasons there’s suffering in the world is in order to help us to discover what we’re capable of. If this is true, it’s obviously a very troubling trade off – your physical loss for my spiritual gain.

But it doesn’t have to be this way. During yamos hamoshiach, suffering is supposed to end. And yamos hamoshiach is supposed to be something that WE can bring. So maybe the key to ending the suffering is for each of us to bring more of that inner greatness out on regular days, so we won’t need catastrophes to unlock the potential within. Please join with me and commit to one small way you can keep on giving even after the Sandy news stories fizzle out.

And together, may we bring an end to suffering and merit to see the redemption soon, speedily in our days.

Hurricane Sandy's Destruction: Groping For Faith in the Midst of Darkness