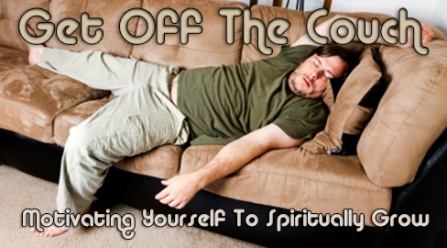 Get Off The Couch: Motivating Yourself To Spiritually Grow 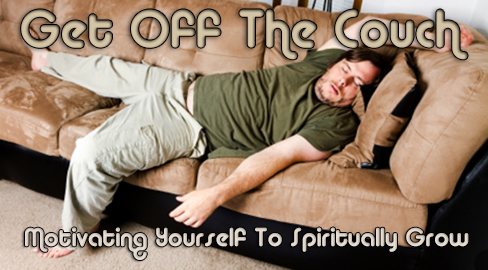 After nearly a decade of  child-rearing-induced-sleep-deprivation, I am thrilled to announce that they’re all sleeping through the night. Every. Single. One. Of. Them. Which would mean that I – the mama – am finally enjoying the well-rested-life, right? Well, not exactly. With all that extra energy brewing inside of me, I have taken to a new hobby: staying up way past my bedtime. Every. Single. Night

Why do I do it, you wonder? (My mother is SO going to yell at me when she reads this! She’s dialing my number right now!) I don’t really know. There always seems to be one more thing to do before bed. One more article to read. One more email to respond to. Every night, as it gets later and later, I think to myself, “This is baaaad. Reaaaallly baaaaad.” You shouldn’t be here anymore. You should be sleeping.” But those thoughts are not powerful enough to get me to act.

My husband and I start playing a game of “couch chicken” around the same time every night. “You get up.” “No, you get up.” “No, I’ll get up after you get up.” (This banter lasts for much longer than it should among responsible adults, until one of us finally gets up.) The problem seems to be that the memory of how tired the morning feels is not close enough for me to taste by nighttime.

But then, when morning comes, and I hear a kid making noise – which is basically how every morning begins – as my eyes open and my head starts to ache, I think to myself, “What were you thinking you irresponsible twit?! How did you make the same mistake again? Didn’t you know that morning would come, with all its exhaustion, like it does every other morning when you stay up too late?!!”

I often think about how this exact same thing will happen at the end of our lives. There are certain rules we’re supposed to be following as Jews. And many of us know what they are. But even when you know what to do, it’s still very hard to motivate yourself to “get off the couch” and do it. Because the consequences always seem so far off in the future and nothing we can relate to right now. But then, when life is over, and we look back at all the things we did wrong, it will be like the episode I go through every morning. “What were you thinking?! Why didn’t you act differently? You KNEW this moment was coming!”

So how do we get ourselves to remember what’s coming “way off in the future” (in truth it could be much sooner, we just pretend it’s way off) when we’re so distracted with “now?” I don’t have any simple answer, but just the other day, something occurred to me that might be the beginning of an answer.

I sometimes cross things off my “happy list.” What’s a happy list? Well, it’s this list that pops into my head from time to time after something nice happens. A great day with the family. A hug from someone I love. Something nice happens, and then in my mind I’ll mentally cross off whatever happened. Sort of keeping track of the fact that there’s one less happy event left in my life now that this one is over. (Yes, I know I’m crazy – this is just how things look inside my head!)

So now that you know about my happy list, onto my discovery: The other day, I yelled at my kids. We were going out that evening, rushing to get ready (my husband wasn’t home at the time), and I had asked my daughters to watch the baby while I put on makeup in the bedroom. Then, all of a sudden, I heard the baby screaming, like someone was torturing him. So without thinking, in an accusatory and I’m-stressed-out-because-we’re-late-and-someone’s-hurting-my-baby voice, I screamed at my daughters, “What are you DOING to the baby?”

And then my daughter, yelled back – in the tone I had just used – an explanation as to why it wasn’t their fault. The baby had just gotten annoyed about something for no reason. But when I heard her voice, I heard my voice in it, and it wasn’t pretty. Ugh, it was HORRIBLE. And I knew that she had gotten it from me. I had jumped to conclusions, accused innocent children, and done it all in an awful sounding voice. I was feeling pretty disappointed with myself, so I called my daughter in and gently explained to her how we both sound and how we must fix it.

Then, as we were in the car, driving to our event and I was replaying that awful scream in my head, I thought of my “happy list” and realized that there’s a much more important list that I ought to be crossing off. My “things to work on list.” See, there’s only so many kisses I’ll get from the people I love in this lifetime, but there’s also only so many opportunities I’ll get to do the right thing when confronted with the choice. Only so many times I’ll get to correct past mistakes, and eventually, I’ll run out of chances. As I thought of this and how I had just messed up one of those chances forever, the consequences – that morning of regret that I know is coming – got much closer.

See, I think I stay on the couch too long, too late, because I believe the bed will always be there, whenever I want it. Perhaps that’s where the ability to transgress comes from. Not only is it hard to remember how the consequences will feel later, we have a false sense of how much longer we have to get to where we want to go. But the night is short and the children will be waking up before we know it – so everybody with me now – get off the couch!

Doesn't Praying to God Interfere With Our Destiny?

Hurricane Sandy's Destruction: Groping For Faith in the Midst of Darkness