Pepsi Wants You To #LiveForNow: Does Judaism Believe in Living For This World Or For Heaven? 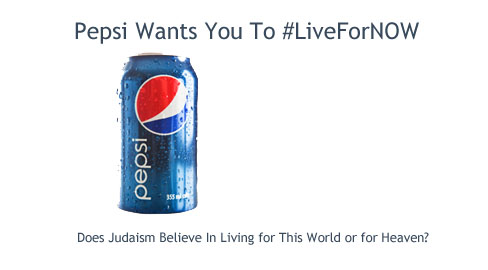 The other day on twitter, I got a promoted tweet from Pepsi that said: “Got a fav #quote? One that gets you going? Tweet to us…if we #loveit we’ll RT and spread the #inspiration #LiveForNow :)” From this tweet I learned two things: number one – the English language has been ruined – possibly forever, and number two Pepsi has a new social media marketing campaign built around the concept of “living for now.”

Because I’m never shy about sharing my opinion, and frankly because I kind of like to make trouble, I tweeted back to Pepsi: ” @pepsi “Living in the moment, lasts for a moment” -the @Maccabeats” #Don’tJustLiveForNow (and then I linked to the Maccabeats song, “The Book of Good Life,” from whence the quote came). Despite that fact that it was a “fave #quote” of mine that “gets me going,” apparently Pepsi did not #loveit, because they did not RT 🙁

Now I understand why a company like Pepsi wants its customers to #LiveForNow. (Full disclosure, Pepsi doesn’t hold a candle to Coke, which is a fact, not an opinion.) Any company trying to sell you soda should do everything it can to only have you think about now, lest you think of then. Then being that time in the future when said soda has wreaked havoc on your body.

But does #LiveForNow have any room in Judaism? Well, yes and no. On one hand, Judaism does not focus on the afterlife (click here to learn more about the Jewish take on it). In fact, olam haba (The World to Come) isn’t even mentioned in the Torah. A common reason that’s given for this glaring omission is because we’re not supposed to simply be living for heaven.

Why? Because Judaism is very much about this world. We’re meant to enjoy the (kosher) physical parts of the world, while we’re in it, so much so that the Talmud says that when a person dies and enters the World to Come, he’ll be asked why he didn’t enjoy more of the world’s (kosher) pleasures. The Torah – essentially our mission as Jews – is about all the things we must accomplish now. Because when to get to “then” (i.e. the World to Come) we’ll no long be able to accomplish.

However, living only for “now” is rather shortsighted. Why, even squirrels live beyond the “now” when they gather acorns in the fall in preparation for the winter. Surely human beings should have at least as much foresight as tree rodents. Perhaps even more. Now as a kid, I did live beyond the hedonistic sense of “now.” I was taught the value of delayed gratification, which is really the only way to achieve anything worthwhile in the world. (Case in point why soda companies should not attempt to teach values or spread #inspiration.)

But despite living a life somewhat planning for the future (in terms of academics, and the like), I realized at a certain point that I was living too much only for the “now.” Because nothing in this world lasts. Even if I achieved every nice goal my secular parents set out for me: be a nice person, find a nice husband, raise a nice family, do well in school to get a good job and buy a nice home – even if I did all that – none of it lasts. All of it would eventually be gone. As the Maccabeats say, “Living in the moment lasts for a moment.”

I wanted my actions to mean something more. Have a greater significance beyond this world. And when I discovered observant Judaism, that’s exactly what I found. Live in this world, but infuse your actions with a meaning and purpose that transcends it. Now that is a quote worthy to RT 🙂