Why Bother Trying to Become Better If I’m Destined to Fall Short? 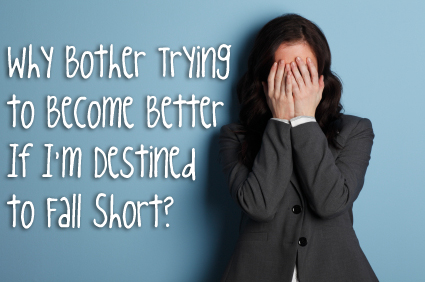 I feel a little hopeless.  On Yom Kippur, we say sorry for all the things we did wrong and try not to do them again for the coming year.  But really, we all know that is impossible- no matter how hard we try, we’ll be saying the same things next year.  As human beings, we are imperfect, we will never be perfect and we will continue to sin.  So then why are we apologizing for making the mistakes we are destined to make by virtue of the fact that we are only human?

I thought about this question a lot and tried to come up with a solution.  There’s a saying: “Shoot for the stars.  Even if you miss, you’ll land on the moon.”  I thought that could be the answer, but then I had another question.  If I am incapable of reaching the “stars”, since no one is perfect, what if I did try my best this year?  Then why should I be sorry for only reaching the “moon?”  It’s hard for me to feel sorry when I feel like I am trying my best.

So my question is really-why should I bother trying to become better, it doesn’t seem like I’m doing the right thing no matter how hard I try.  And even if I think I’m becoming better, is G-d really still not happy with me?

Thanks for your question, but I won’t allow hopelessness around here! Hopelessness, despair – these are not Jewish ideas. They come from the part of you that’s meant to hold back your growth, also known as the yetzer hara (evil inclination). If a situation is hopeless, then why bother? Just give up. That is not ever the Jewish way. We always keep trying to push forward, no matter how desperate the situation seems, and we garner strength from the fact that we have a loving Parent in heaven, who we believe is with us every step of the way. So keep all that in mind as we answer your questions.

If God created us as imperfect beings it means that God doesn’t expect perfection – He expects effort. Angels (don’t picture winged, dead people with halos on their heads, but rather spiritual forces that serve God in the spiritual realm) are perfect. They were designed to be unable to disobey God. But they are less like God than we are because they lack the free will that we were endowed with. Which means that when a human being chooses good, she has the ability to become greater than an angel! (Likewise, animals too lack free will, and so when a person chooses bad, she’s considered lower than an animal.)

(A side point to consider: How exactly would the world worked if we even could reach perfection? Would a person, upon completion of all his tasks, just suddenly drop dead? People would be afraid to become perfect as it would be a death sentence!)

Though the list of obligations may seem long, we’re told in Pirkei Avos (Ethics of the Father) that God gave us so many mitzvos in order to increase our merit. Different people have different spiritual capabilities based on where they started off and what factors they must fight against, but God gave us plenty of mitzvos so that no one would ever run out of work in this world.

At the same time, God recognizes what each of us are able to accomplish and only judges us based on that. As the famous story goes, the holy rabbi, Reb Zusha once said, “In heaven I’m not afraid that I’ll be asked why I was not as great as Moshe Rabbenu (Moses), but rather why I wasn’t as great as Reb Zusha.”

If you are working so hard, which it sounds like you are, then it seems to me that you’re approaching Yom Kippur incorrectly. First off, maybe you DID conquer some of the things on the list that we say every year on Yom Kippur during vidui (confession), but since kol yisrael arevim ze l’ze (every Jew is responsible for one another), we confess our shortcomings as a nation to show that we’re in this struggle together.

Second, you should be aware of, even proud, of the growth you made as you enter Yom Kippur, not in an effort to be haughty, but rather because as we can clearly see, being too down on yourself can cause spiritual paralysis! The year that I made it to seminary in Israel (many years ago) was a BIG year of growth for me. I had taken on a tremendous amount of mitzvos and lifestyle changes during that time.

I struck my chest and read my list of confessions that Yom Kippur – I knew there was still more to accomplish at that point. But I also gave myself a big pat on the back because I had worked hard and I knew that I needed to take a moment to recognize my strengths before I was able to examine my weaknesses.

Don’t only look at the list of transgressions as an apology, look at it as a to do list for the coming year. You need to go over the list annually to see what’s left. You won’t ever complete the whole thing – none of us will. But if you live you’re life, as you are now, trying your best, then you will be giving your Parent in Heaven a tremendous amount of nachas!

"Science vs. Religion: Mayim Bialik and the OTHER Big Bang Theory" Ep. 4, Season 2