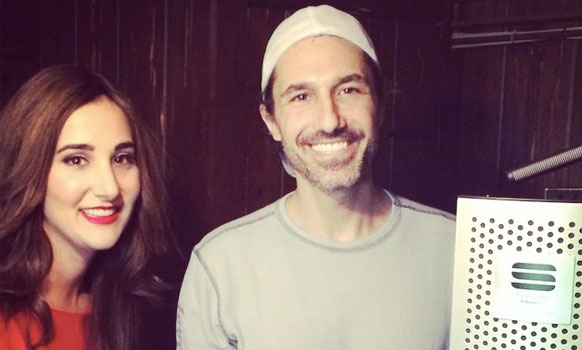 Ethan Zohn, winner of the reality show Survivor, and founder of the non-profit Grassroots Soccer, is no stranger to extreme challenges. From professional soccer player to cancer crusher, his achievements include several marathons, as well as being a mouthpiece for Stand Up To Cancer, the face of an ABC health show, and inventor of the EZ crunch bowl. Despite the personal obstacles he has faced, Ethan is unrelenting in his mission to give back. With the winnings from Survivor he co-founded Grassroots Soccer, a non-profit that uses soccer as a medium to educate youth in Africa in HIV/AIDS prevention.

Ethan first came to JITC’s founder and director Allison Josephs’s attention at an ROI conference in Jerusalem (in June of 2013), a leadership network summit intended to motivate the next generation of young Jewish leaders. Ethan had been invited and had wandered into Allison’s seminar on social media. Although he was raised as a Conservative Jew, Ethan’s exposure to Orthodox Judaism came from his mother’s side of the family, as his mother was raised as he describes as “Orthodox-Hasidic.” When going to family events, like weddings, bar or bat mitzvahs, Ethan admits to feeling like his family was the “black sheep.” Curiosity led him into JITC’s seminar, as he was intrigued with how it proposed to “bridge the gaps and erase the stigmas,” between the communities. Referring to his conversations and correspondence with JITC founder, Allison, Ethan confesses that, “talking to Allison helped soften the differences…I definitely had stigmas about my own family.”

Ethan never thought his Judaism would ever filter into his professional or public life and was surprised when it came up during his time on Survivor. Hungry, exhausted and deprived of the basic necessities, Ethan had no choice but to become used to the ache in his gut. When he was presented with the opportunity to pool his resources together in what the show calls a “food auction,” it was then that his religion came under the magnifying glass. The other contestant in the auction, Big Tom Buchanan, came from small town America and had never met a Jew in his life, and when the mystery plate of food revealed itself to be ham, his overzealous claims to the food on the grounds of Ethan’s Judaism, was not received well by some in the public audience. Though Tom was later criticized for his tone and manner, Ethan just recalls laughing about it, finding nothing derogatory or bigoted in his fellow contestant’s limited knowledge of Judaism. Ethan saw it as an opportunity to educate Tom about Jewish culture. Though Ethan wasn’t strictly keeping kosher after leaving home, he admits that he would never touch pig or shellfish because those foods have been deeply ingrained into him as cultural taboos. Without intending to, Ethan’s refusal to eat the ham on Survivor was considered a Kiddush Hashem to many Jewish viewers, and his good-natured reaction to the whole bizarre scenario was considered a great show of integrity. This Survivor anecdote shares an uncanny resemblance to Ethan’s animated character in JITC’s “Green Eggs No Ham,” video. Ethan collaborated with JITC on the video animation short “Green Eggs, No Ham,” (currently on the JITC site), about keeping an open mind before repudiating Jewish customs. The animated short is derived from Dr. Seuss’s “Green Eggs and Ham,” where the main character learns not to reject something based on prejudgment. “It was a fun way to address a pretty important issue,” Ethan says.

Ethan believes that giving back heals the world, something that Jewish scholars have expounded upon for centuries. The precept of giving back and social responsibility is central to his life. When asked about which of his duties takes priority he soundly affirms that, “Grassroots Soccer is my baby.” Before Ethan was on Survivor he was playing professional soccer in Zimbabwe, where he encountered the destructive force of AIDS on the local community. Without the funds or the idea of how to combat it, Ethan was at a loss as to how he could make a real impact. After his stint on Survivor (which took place in Africa the season he participated),Ethan decided that there was no excuse for stalling anymore. “To make happiness real for others is one of the greatest gifts,” Ethan explains.  With a wry laugh Ethan describes how he set his vision in motion after Survivor. “I had a million dollars from Survivor, and my fifteen minutes of fame,” so he used it to start Grassroots Soccer, which trains professional soccer players and gathers youth in organized sport initiatives aimed at educating and mobilizing them against the spread of HIV/AIDS. Ethan, who enjoys good quotes, was offered one by host, Allison. “Giving is godlike. [As it’s written in Pirkei Avot] ‘Say little, do much’.

The Eagles Running Back Who Became An Orthodox Jew

NYT Profiles All Star The Hon. Ruchie Freier & Other Orthodox Jews in the News

A Few Good (Orthodox) Men To Celebrate This Father’s Day