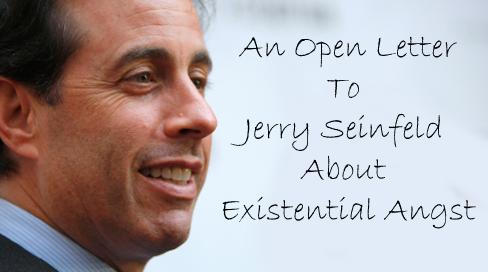 My husband and I recently saw your show at Foxwoods. I knew you’d be funny, but you surprised me with how serious you got at one point. It was the joke about how people always complain that there’s not enough time in life, when in fact, there’s too much time.

Life, you noted, is really just about filling up a whole lot of time until it’s over. People laughed when you said it, but it seemed to me that there was actually a lot of pain behind those words. I was reminded of my childhood existential crisis when I realized the same thing. Life is not much more than trying to stay busy enough to not have time to consider what you’re staying busy for in the first place.

When I made this realization (at eight years old) I had a very nice life – close family, good friends, everything I needed, and many things that I wanted. But I under- stood that none of it was going to last beyond this world and that nothing I did would ultimately matter.

You’ve made a career out of noticing the things that most people don’t pick up on. The pointlessness of life is something probably everyone realizes at some point or another but then tries to forget just as quickly. Forgetting is one form of coping; humor is another. My strategy was on and off insomnia and mild panic attacks for eight years. (Didn’t say it was a good strategy!)

As long as I was distracted, from the ages of eight to sixteen, I was a regular, happy kid. But it was usually late at night, when all the distractions were gone, that a voice inside my head would scream “Why did anything you do today matter? Why bother getting up tomorrow to do it all over again?”

Jerry, I’m writing you this letter because I saw online that you’ve always been a soul searcher. In interviews you’ve talked about how you’ve dabbled in Scientology and have spent years in transcendental meditation and other sorts of self-help methods. I found an answer to my years of searching in a place that I believe you’ve never checked and is one of the last places on earth you’d ever think to check – observant Judaism.

Now I know it’s not considered polite to discuss religion in mixed company, but I’m doing it anyway because I wish that someone had shared this information with me sooner. I’m sure like the rest of the world you see religious Jews as backwards, closed-minded, extreme people who you’d never want to have anything to do with, much less learn anything from. Woody Allen summed up the feeling in that famous hasid scene in “Annie Hall.”

But here’s the thing – a lot of us are much more normal than you realize, and your Torah, your heritage, your traditions are so much deeper than you ever imagined. We Jews are an educated bunch, but we’re also an arrogant bunch. The majority of us know next to nothing about Torah wisdom and observant living, yet we are certain that it’s not for us. We’d rather look anywhere else (the Far East, transcendental meditation, Scientology, the latest self-help fad) than in our own backyards.

Jerry – you have it all. The wife and kids, a career you love, fame, adoration, more money than you even know what to do with. But you keep searching. Something inside of you is never settled, and I believe that it’s the pintele yid – the spark of Jewishness in your soul – that senses that there must be some point to this all, even as it continues to elude you.

You mentioned during the show how you came to marriage, kids, and coffee late in life. I’d like to suggest that you come to Torah exploration later in life too. I don’t know who your ancestors were, but I’m certain that there were people in your family who were willing to give up their lives in order to hold on to our traditions. I implore you to take some time to try and understand why.

The likelihood of you ever seeing this letter is obviously quite low, but then again, the likelihood of my wanting to connect with Mayim Bialik in the same way and ending up as her spiritual mentor, was also quite low, but it happened. If you do see this and want to be in touch, shoot me an email on the JewintheCity.com.

How Can I Support My Intermarried Cousin Even Though I Know She Made a Wrong Choice?