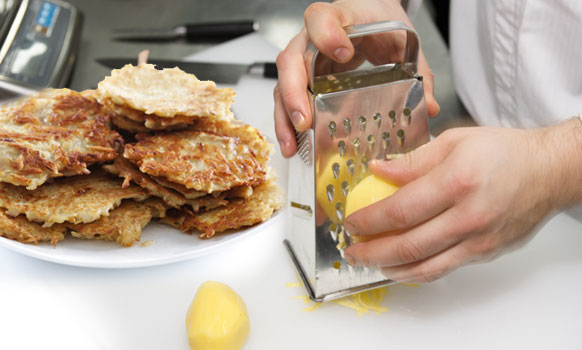 Well, I did it. In honor of the commencement of Chanukah, I ate nothing but latkes and donuts the entire day (plus my daily cup of coffee in the morning) and as gross and that sounds, and come to think of it, as gross as my stomach feels right now – I’m not exaggerating – that’s really all I ate today.

So before I double over in pain, I’ll leave you with a thought: This morning at my daughter’s Chanukah party at school I had my first latke of the year. It was one of the pre-made frozen types and it was pretty decent – especially since it’s been a year since I had my last latke.

But then this evening, I made a little Chanukah party with some friends, and there I made latkes from scratch. I peeled over a pound of potatoes, grated and then strained them. Next I took onions and scallions and pureed them, and by the time it was all mixed up with eggs, salt and pepper and ready to fry up, I was completely exhausted.

I placed heaping spoonfuls of latke mixture into the frying pan which took a while to heat up, but as soon as those suckers started to get crispy and brown, and I snagged my first taste, I realized that all the effort had been worth it.

Working hard to achieve greatness is not a new idea. (The Jewish way of saying it is “l’fum tzara agra” – according to the struggle is the reward.) But we live in a world of short cuts. We have no time or patience to cook half the time, so we do frozen dinners or takeout instead. We want quick downloads on our computers, the fastest transportation available, and we can’t even watch an online video for more than a few minutes without getting bored.

And this is how people want their Judaism too. Most Jews today practice T.V. dinner Judaism. It’s convenient, doesn’t take much time or effort, but honestly, it doesn’t offer much payback either, in terms of taste or value. The problem, though, is that the majority of Jews in the world have never even experienced the awesomeness of “home-cooked” Judaism. Trying to simply describe it in words would be like trying to explain what a gourmet meal tastes like to someone who’s been eating only McDonald’s his whole life! If you want to experience a truly delicious, rewarding, spiritually uplifting Judaism yourself, you’ve got to be willing to paschke a little bit first.

**to paschke – to work hard, toil over

**paschkes – things one must work hard or toil over

“Miracle on 42nd Street” Aish.com video » « Dynamic as a Blog

Second Life? Get a Life!

Stop Freaking Out About What You’re Going To Cook For Passover!