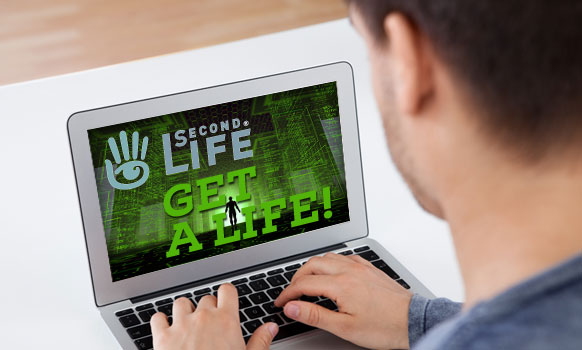 Second Life? Get a Life!

Perhaps because I have a full enough first life, it was only over the weekend that I first learned about an online game called “Second Life.” For those of you who have also not had the privilege of hearing about this fairly new phenomenon, Second Life is an online 3D digital world where you create a virtual version of yourself called an avatar (not that it has to resemble you, or actually have anything in common with you at all) and get to live in a fantasy world with eight million other registered users. Now, there are a plethora of obvious questions as to why so many adults would waste so much time in their real lives creating a world that doesn’t actually exist and playing pretend with people whom they will never actually know. But the Wall Street Journal article that I read over the weekend raised an even more disturbing question: Is a married man who marries another woman on Second Life cheating on his real life wife?

The article profiles a 53-year-old man named Ric Hoogestraat who’s been married to his wife Sue for seven months. But there’s another woman in his life. Although he’s never actually met her and hasn’t even ever spoken to her on the phone, their relationship has gotten pretty intimate in Second Life. Reports the Wall Street Journal:

They own two dogs, pay a mortgage together and spend hours shopping at the mall and taking long motorcycle rides. This May, when Mr. Hoogestraat, 53, needed real-life surgery, the redhead cheered him up with a private island that cost her $120,000 in the virtual world’s currency, or about $480 in real-world dollars. Their bond is so strong that three months ago, Mr. Hoogestraat asked Janet Spielman, the 38-year-old Canadian woman who controls the redhead, to become his virtual wife.

If you want to be thoroughly disturbed and give yourself a reason to throw out your internet router, I suggest reading the rest of the article. This Ric Loserstraat can spend fifteen hours a day in this land of make-believe–and when he’s “playing,” he is completely unaware of the real world that continues to exist around him. He literally doesn’t talk to, interact with, or spend any time with his real-life wife! But he tells her not to worry about his fantasy marriage because it’s only a game.

In the Torah, the tenth commandment forbids us from coveting our neighbors’ house, spouse, and possessions. Even if we don’t act on our desires, the message is loud and clear: dreaming and wishing and wanting something that is not ours is very dangerous in its own right. And that, I think, is what makes this whole Second Life phenomenon so disturbing. It’s not just another addiction, as someone commented on a blog I read.

It’s not just that Mr. Hoogestraat is ignoring his real life wife, indifferent to her pain, sharing intimate moments with another woman. It’s that he’s coveting a wife–and a life–that is not his. And to waste a real life dreaming about a make-believe one, now that’s a sin.

A Jewish View On The Solar Eclipse

The Cover Up Is A Worse Chillul Hashem Than The Crime